Millions of people visit national parks each year for the chance to spot wildlife, including such iconic species as black bears, bison, pronghorn and wolves — but wherever you go, you are virtually guaranteed to see birds. Each year, people spot more than 900 species of birds in the United States, and national parks are among the top viewing destinations.

But which national parks have the most bird species? I wanted to know, so I dug into the data to find out. 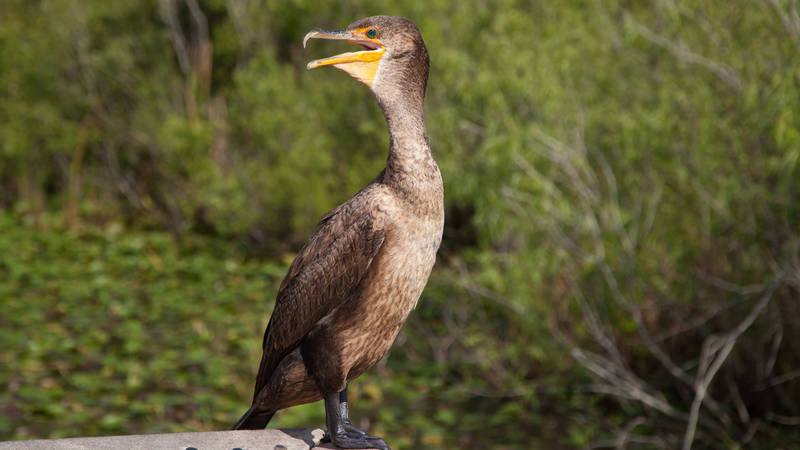 The number of bird species in each national park site, organized from highest to lowest, as of March 2017.

Avid birders all over the world use eBird to record their sightings and maintain lists of what they’ve seen. The eBird website collects all the information in a massive, searchable citizen science database showing bird sightings and other information. To find the national parks with the most kinds of birds, I went in and tallied up the recorded sightings for each of the 417 national parks units (yes, all 417!).

A little bit about how this list works. First, birds sometimes wing themselves to unusual places, and birders love these rare sightings. Even if a particular species has only been spotted in a park once, it still counts for the park. Second, all these sightings are verified by eBird, which has pro birders that review sightings of rare birds in each state. So, we can trust these numbers. 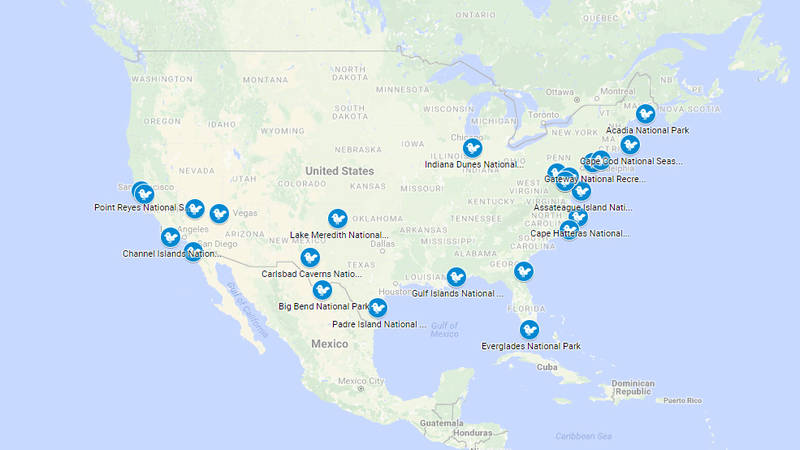 The 25 top birding sites on one map.

Now, it’s not perfect. Some sightings, especially older ones, aren’t in eBird, and low species numbers for some parks, like those in Alaska, reflect a lack of birding access more than low species diversity. Still, I feel the final numbers are a good reflection of bird diversity in our National Park System.

For each park, I’ve included an example of a notable bird that, with a little luck, a visitor might spot there.

My favorite part of this list is the broad geographic diversity. Parks from every corner of the nation make the list, a true testament to the importance of protecting a variety of habitats, and to the birders who scour the country after their quarry.

The parks are listed from fewest species to most.

There’s a nice mix of habitats in this north Texas site, including a big lake that attracts shorebirds and waterfowl from miles around. Keep an eye out for: cinnamon teal.

This is the first of several national seashores on this list. Seashore parks are great places to see a wide diversity of birds because they offer many different habitats in relatively small areas. These habitats include oceans and beaches and often fresh water, woods and grasslands as well. Keep an eye out for: piping plover.

The parks* of eastern and western D.C., mostly along the Potomac and Anacostia rivers, protect a variety of habitat in a densely populated area. Keep an eye out for: wood ducks.

This rugged coastline is a hidden gem for naturalists and a great place to see southern birds in a tranquil setting. Keep an eye out for: brown pelican.

The coastal islands off North Carolina are a paradise for birders looking for massive flocks of shorebirds migrating up and down the coasts. Keep an eye out for: willet.

The District makes the list again! The waters of the Potomac and the trees along Hains Point provide a resting spot for lots of species. Keep an eye out for: Caspian tern.

The Blackburnian warbler, one of many migratory bird species that can be found in national parks.

This coastal park is a hotspot for migratory birds in spring and fall. Keep an eye out for: Blackburnian warbler.

This small San Diego park has more bird species than acres. Its location on a peninsula gives birders a panoramic view of the Pacific. Keep an eye out for: black-vented shearwater.

Here’s another small, urban park with a ton of bird sightings. Good thing Francis Scott Key was watching the star-spangled banner and not looking for warblers! Keep an eye out for: redhead.

A huge park with a diverse set of habitats equals a whole lot of bird species. Keep an eye out for: western grebe.

The Everglades might be the national park people think of most when they think of birds, and with good reason. The swamps and mangrove forests in the Everglades are critically important for millions of birds. Keep an eye out for: snowy egret.

This long park winds its way across miles of land filled with migrant songbirds and overwintering waterfowl. Keep an eye out for: cerulean warbler.

This lovely park on the south shore of Lake Michigan is a major hotspot for birders in Chicago and northwest Indiana. Keep an eye out for: pileated woodpecker.

Channel Islands has the distinction as being the only park with a species that lives ONLY within the boundary of the park: the island scrub-jay. Keep an eye out for that one, clearly.

Year-round warmth on the Texas coast make Padre Island a good destination for birds in any season. Keep an eye out for: roseate spoonbill.

Water in the desert isn’t just good for thirsty travelers, it’s good for birds, too, and more than 300 different species have been recorded at the Rattlesnake Springs unit of this park alone. Keep an eye out for: vermillion flycatcher

Cape Hatteras is more easily accessible to birders than Cape Lookout, to its south, which I suspect is why more birds have been spotted there. Either way, coastal North Carolina is a wonderful birding destination. Keep an eye out for: greater yellowlegs.

These coastal islands are the spot for incredible migratory birding. In the spring, these islands are the first dry land seen by thousands of songbirds making the long journey over the Gulf of Mexico from the Yucatan Peninsula. Keep an eye out for: painted bunting.

Most people come to Assateague to see the wild horses, but they should really be looking for birds. Dunes, ponds and forests all in a small area mean a wide variety of different bird species to see. Keep an eye out for: black skimmer.

Extending far out into the Atlantic, Cape Cod serves as an important refueling spot for dozens of shorebird species and a great place to see numerous oceanic species that otherwise don’t come close to land. Keep an eye out for: great shearwater.

This large desert park, known for its foreboding landscapes, might seem like a surprise birding hotspot. But the Furnace Creek section of the park is an oasis for birds looking for water and shade, and has hosted 322 species in that small area alone. Keep an eye out for: greater roadrunner.

Birders know Big Bend as one of the most unique birding destinations in the country. Its location on the Mexican border means that many species that are uncommon further north often show up here, including the Colima warbler, which is regularly found nowhere else in the United States. Keep an eye out for: Colima warbler.

Birders frequently talk of the “Central Park Effect” — birds migrating over urban areas seek out whatever green spaces can be found. Move the Central Park Effect a few miles south, include some really fantastic marsh and shoreline habitat, and add a lot of birders, and you’ve got Gateway National Recreation Area. Keep an eye out for: least tern.

Our winner! Point Reyes is the total package for a birder. It’s got incredibly varied habitat, including grassland, forest, beach, freshwater ponds and open ocean views. Plus, it’s at the end of a large peninsula, which means it can act as a funnel for wayward birds traveling down the coast. It all adds up to more than 400 bird species, the most of any national park in the system. Keep an eye out for: American kestrel.

Do you want to see more? Check out my list of all the national park sites ranked by bird species diversity (though more than 100 sites, mostly small cultural and historical parks, don’t have bird data available).