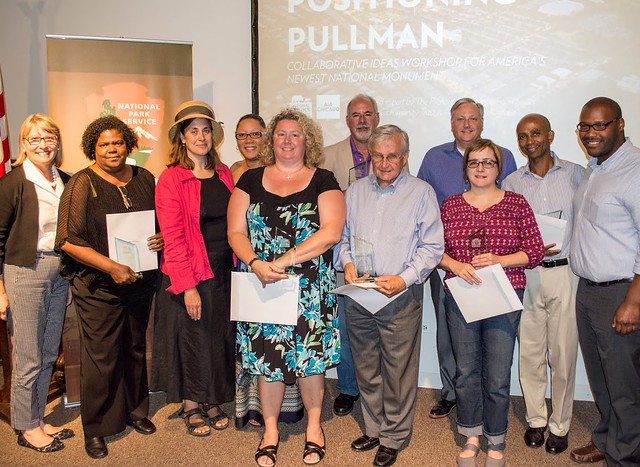 CHICAGO – National Parks Conservation Association (NPCA) will today honor eight organizations, known as the Pullman Partners, with the national Marjory Stoneman Douglas Conservation Award at a community event at the Pullman National Monument Visitor Center.  The groups are receiving the award for their work to establish Chicago’s first national park.

“It has been an exciting journey to see the enthusiastic and unwavering commitment of these Pullman community groups, which led to the designation of Pullman National Monument – Chicago’s first national park,” said Clark Bunting, President and CEO of the National Parks Conservation Association. “Community support for some of America’s most treasured places is critical to the work that NPCA does each day. It is voices like theirs that help ensure places like Pullman are protected and their stories are told for generations to come.”

Together with NPCA, the Pullman Partners built tremendous support for designating a national park at Pullman, supported legislation introduced by Senators Richard Durbin and Mark Kirk and Congresswoman Robin Kelly to establish the park, and sent more than 13,000 individual support statements to President Obama urging the national monument designation.

As champions of the “We Support a National Park at Pullman” campaign, the Pullman Partners hosted neighborhood meetings and events, went door to door talking to neighbors, conducted walking tours of the historic neighborhood and answered residents’ questions about the national park idea. They wrote letters to the Illinois congressional delegation and testified before Congress in support of creating a national park at Pullman and their passion never ceased.

On February 19th of this year, President Obama designated Pullman National Monument as our 406th national park site. “The Pullman designation is a testament to the Pullman Partner’s passionate spirit,” said Lynn McClure, Midwest regional director for NPCA. “Thanks to these committed people, the Pullman neighborhood and its wonderful history will be remembered and told for generations of national park visitors each year.”

NPCA’s annual Marjory Stoneman Douglas Award was established in 1986 to honor people who go to great lengths to advocate and fight for the protection of our national parks. Named for Marjory Stoneman Douglas, a life-long advocate for Everglades National Park, this annual award recognizes the outstanding efforts of an individual or group that result in the protection of a national park or proposed site in the National Park System.

About the National Parks Conservation Association
Since 1919, the nonpartisan National Parks Conservation Association has been the leading voice in safeguarding our national parks. NPCA and its one million supporters work together to protect and preserve our nation’s natural, historical, and cultural heritage for future generations. For more information, visit www.npca.org.