Once hunted to the brink of extinction, sea otters have recolonized Glacier Bay National Park with a vengeance.

Several times each July, when the weather over southeast Alaska’s Glacier Bay National Park cooperates, Jamie Womble climbs into a floatplane and points a high-resolution camera through an opening in the floorboard. As the plane cruises back and forth in straight lines, Womble, a National Park Service biologist, snaps photos — not of the park’s stunning mountains or eponymous ice walls, but of the ocean’s surface. She’s looking for the sleek, voracious carnivores that have come to inhabit Glacier Bay in astounding numbers: sea otters.

Womble’s photographic flights are part of a broader effort to monitor Glacier Bay’s otters — one of the fastest-growing populations of Enhydra lutris in the world. That’s where the aerial camera comes in: Counting these little specks in a photograph is a lot easier than tallying them on the fly. Otters are social creatures that congregate in flotillas, or “rafts,” that in Glacier Bay can number more than 900 animals.

“Seeing a group of several hundred densely aggregated otters is a pretty spectacular sight,” Womble said. It’s also a remarkable conservation story. When Womble first came to the park in the mid-1990s, otters had just begun to recover from a 170-year killing spree. Russian hunters pursued Alaskan sea otters for their luxuriant pelts — the densest in the animal kingdom — beginning in the 1740s and were eventually joined by British and Americans, who traded furs, known as “soft gold,” with China. By the end of the 19th century, traders had extirpated otters from nearly their entire Pacific Rim range — including southeast Alaska.

“Given a little bit of protection, they recover from whatever we throw at them.”

Otters’ fortunes began to reverse when an international treaty passed in 1911 banned hunting, staving off extinction. In the 1960s, the Alaska Department of Fish & Game decided to accelerate the species’ recovery, relocating around 400 otters from the Aleutian Islands and Prince William Sound to the state’s southeastern waters. The transplants reproduced so readily that, by 2011, their descendants numbered more than 25,000.

“They seem to be incredibly resilient,” said Todd McLeish, author of “Return of the Sea Otter.” “Given a little bit of protection, they recover from whatever we throw at them.”

The furry pioneers that recolonized Glacier Bay found a coastline in a state of dramatic flux. As recently as 1750, Glacier Bay didn’t exist. In its place was a massive glacier in a sprawling valley historically occupied by the indigenous Tlingit people. Beginning in the 18th century, the glacier started retreating up the branching valley, the ocean nipping at its heels. A single gargantuan glacier has since shrunk to many smaller ones tucked within steep fjords — exposing, in the process, hundreds of miles of coastline. Salmon, Steller sea lions and sea otters all took swift advantage of the new marine habitat. 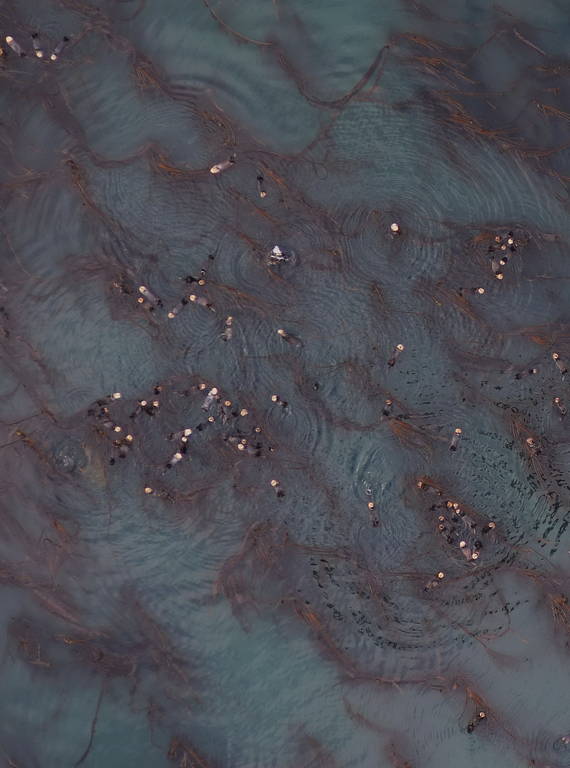 “We see a lot of new things happening on relatively short time scales,” Womble said. “From the perspective of an ecologist, it’s a really dynamic place to work.”

Glacier Bay’s first recent otter sighting occurred in 1988, when observers in skiffs spotted some hanging out at the bay’s mouth. When the U.S. Geological Survey began its aerial surveys five years later, the population, which then totaled around 340 animals, hadn’t yet begun to expand its range. As the glacier receded and their numbers grew, though, the marine mustelids pressed deeper into the fjords. Predators mostly stayed out of the way: In Glacier Bay, orcas, which feast on otters elsewhere in Alaska, seem to prefer juicier prey, such as harbor seals and porpoises. According to a study by Womble and her colleagues, the park’s otter population increased by 20% each year for two decades, reaching about 9,500 animals by 2012 — “kind of like bacteria in a petri dish,” said Perry Williams, an assistant professor of wildlife ecology at the University of Nevada, Reno and a co-author of the study.

As otters erupted, they changed Glacier Bay itself. In their absence, bottom-dwelling invertebrates had thrived both in size and numbers. “The urchins were huge, the crabs were extremely abundant, there were horse mussels the size of bananas carpeting the bottom,” recalled George Esslinger, a USGS marine ecologist. Over time, though, otters — which consume a quarter of their body mass each day — depleted the bounty and turned to other foods, such as blue mussels. “They eat them so fast it’s like popcorn,” Esslinger said.

Elsewhere, this ravenous foraging has profoundly altered marine ecosystems. In the Aleutian Islands, the disappearance of otters permitted the proliferation of urchins, which in turn grazed kelp forests to nubbins. When the hungry mammals returned, urchins declined, and the undersea forests recovered, to the benefit of fish and other sea life. Scientists thus consider otters “keystone species”: creatures, such as beavers, elephants and wolves, that exert disproportionate influence on the world around them.

Whether otters have likewise catalyzed a “trophic cascade” in Glacier Bay isn’t yet clear. Much of the bay’s floor is covered by soft sediments that are less suitable to urchins and kelp, and otters have adjusted accordingly, feasting more frequently on clams. (Unlike seals and sea lions, otters make things easy for curious ecologists: They consume their meals at the surface, using rocks as utensils and their plush bellies as tables.) Still, otters do rely on urchins for nearly 20% of their food, which may be having an impact. “It’s anecdotal, but it seems we’re seeing much more kelp in some areas,” Womble said.

Not everyone in southeast Alaska, however, has delighted in the otters’ recovery. As otters have rebounded, they’ve cut into the bottom lines of lucrative commercial fisheries — and, in some cases, diminished Alaska Natives’ subsistence foods. Although otters are protected from hunting under the Marine Mammal Protection Act, the law contains an exemption for Alaska Natives, who harvest around 1,400 otters annually statewide. Some state senators have advocated for expanding the hunts, and in 2018 the chairman of Alaska’s Fisheries Board asked the federal government to let local communities “responsibly and sustainably manage the species.”

Although otters are currently protected from hunting within Glacier Bay National Park’s borders, other forces may soon limit their growth. According to Esslinger, the park’s otters are likely spending more time scrounging up less nutritious prey, suggesting that their population is gradually approaching the total number Glacier Bay can support and that some otters might have to make a living outside the park. The impact of climate change on otters throughout their range is another uncertainty, but in Glacier Bay, warming temperatures have so far been a boon to them by opening new coastal habitat, said Williams, the wildlife ecologist. “In the face of climate change, many species are going to lose out,” he said. “But other species are going to benefit, and sea otters are one of them.”

This article appeared in the Spring 2020 issue

In the Heart of Darkness