In the Heart of Darkness

By Julie Scharper
Spring 2020: In the Heart of Darkness

In 1989, teenager Rachel Cox got lost in Wind Cave. Decades later, she found inspiration and comfort there.

Deep underground in South Dakota’s Wind Cave National Park, Rachel Cox thought she heard her instructor laughing in a nearby passage. It was October 22, 1989, a Sunday, and Cox, then 18, was taking part in a mock search-and-rescue operation. She and other college students had just spent two weeks exploring Wind Cave — her first caving experience — and now they had broken into teams in a race to find the instructors’ hiding spots.

Cox convinced her team members that the instructor was nearby. She and a partner set down their daypacks and wriggled through a tunnel to look. But the instructor wasn’t there. Criticizing Cox’s judgment, the other student declared that he was going back. Cox, annoyed, paused for a moment before preparing to follow him. That’s when her lamp went out.

Alone in the silent darkness, Cox cursed herself for forgetting that her lamp had been low on fuel. She first decided to remain in the spot she had been when her partner left, as she had been taught. Yet as time stretched on, it occurred to her that she could simply crawl back through the tunnel from which she had emerged. She felt for the opening and squeezed through — but found herself in the wrong passageway.

At one point, cold, hungry and desperate, Cox felt that she heard the cave speaking to her.

Without a pack or working lamp, Cox had no food or water, no heat source, no light. She knew the most immediate risk was hypothermia, so she kept moving. She tried to make as much noise as possible — shouting, singing, clinking her lamp on cave walls and reciting passages from Shakespeare’s “As You Like It.”

Meanwhile, the other students and the instructors were searching the area where they had lost track of her. “We had just spent two weeks in that cave, and we knew it pretty well,” said Robb MacLeod, a fellow student and member of Cox’s team. “We didn’t understand where she could be.”

Cox tried to find her way back to the spot where she got lost but only burrowed deeper into the cave. The hours blended together. At one point, cold, hungry and desperate, Cox felt that she heard the cave speaking to her: “This gentle female voice said, ‘I am the womb of Mother Earth. You are safe. I will birth you.’” Eventually, she found herself deep in a fissure, where she recalled seeing visions of balls of light and relatives praying for her return.

Unable to find Cox, the instructors alerted the park’s rangers. The National Park Service mobilized scores of cavers — first tapping locals and then, as the hours passed, contacting experts in other states. Jim Nepstad got the call to help on Monday evening. He had previously worked as a cave specialist at Wind Cave but was stationed at Mammoth Cave in Kentucky at the time. Nepstad caught the next available flight and once there worked to coordinate teams of volunteers. “I would describe Wind Cave as the easiest cave in the world to get lost in,” said Nepstad, who is now the superintendent of Effigy Mounds National Monument in Iowa. “The density of the passages is just unbelievable. It’s a three-dimensional maze.”

About 30 hours after Cox’s disappearance, Nepstad and the other coordinators started sending rescuers to more remote areas. It was one of these volunteers who finally found Cox, 36 hours after she had last been seen. Cox heard rocks falling in the distance, once, twice, three times and called out for help. “I suddenly saw this light, and this man with a big beard said, ‘Rachel, are you ready to leave now?’” recalled Cox, who is now 48. “I said, ‘Are you God?’”

It took two more hours to extricate Cox, weak and shaking, from the cave. She was dehydrated and mildly hypothermic but had no serious injuries. After spending a night in the hospital, she reunited with her father, who had flown in to meet her, and later that day she rejoined her group at their campsite.

But while Cox was physically fine, she felt deeply ashamed for the series of mistakes she had made that day, a feeling she could not shake. She also worried that the massive search she had triggered had damaged the cave’s delicate passages. 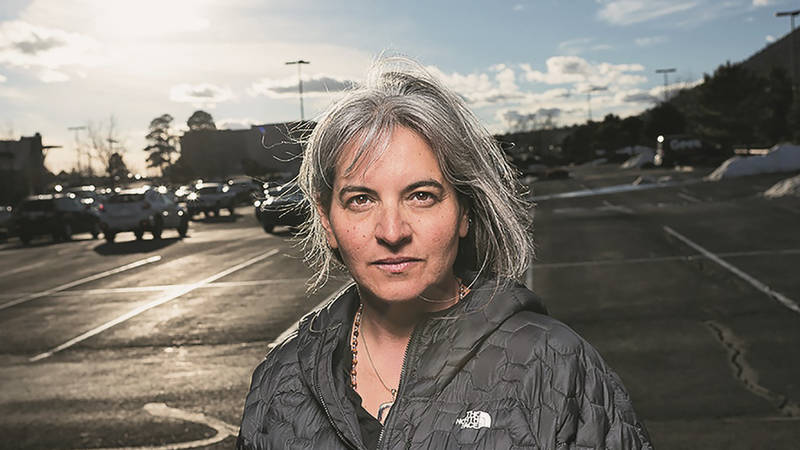 A recent photo of Cox, now a documentary filmmaker and a professor of environmental communication.

For most of her life, Cox felt that being trapped in the cave was the worst thing that would ever happen to her. She finished college and graduate school, got married, had three children and built a career as a documentary filmmaker and a professor of environmental communication.

Then, in February 2015, the unthinkable happened. A distracted driver plowed into Cox and two of her children as they were walking in a parking lot near their home in Flagstaff, Arizona. Cox and her daughter suffered treatable injuries; her 3-year-old son was killed.

Two years into her nearly unendurable grief, Cox was surprised to receive a phone call from the staff of Wind Cave. They hoped to record an oral history of her experiences. Was she game? Cox returned to the cave with one of her daughters and MacLeod, with whom she had kept in touch.

A guide took the group back into the cave, and, at Cox’s request, turned out the lights. Cox lay on her back in the darkness and could sense her son’s presence. “Here I was deep in this cave, and I could feel him for the first time since he died,” she said. “Then I heard that voice again, and she said, ‘He’s always with you.’”

“Who am I now?” Cox recalled asking. “What am I supposed to do? The voice replied, ‘Tell your story. Tell our story,’” she said.

Although she had not picked up a camera since her son’s death, Cox left that day in 2017 with plans to create a documentary about her experience at Wind Cave and its aftermath. Since then, she has completed nearly all of the research and interviews and is working on editing the film, which she hopes to launch next year.

The process of interviewing park officials and those who rescued her has already been transformative. She was gratified to learn that her disappearance had led park leaders to encourage further exploration of Wind Cave. At the time she was lost, only about 50 miles of the cave were known. Last fall, she accepted an invitation to speak at an event commemorating the mapping of the cave’s 150th mile — the cave is now ranked seventh-longest in the world.

Moreover, after decades of carrying a sense of shame for her actions on that day in 1989, Cox has begun to forgive her 18-year-old self. She has found inspiration, too, in recalling the inner strength she discovered during her ordeal in the cave, a strength she tries to tap into as she grapples with the agony of losing her son. “It’s given me a roadmap of sorts for dealing with this trauma,” she said.

This article appeared in the Spring 2020 issue