Love Is in the Parks

Don and Lisa on their wedding day in 2009 on the Appalachian National Scenic Trail.

In honor of this month’s Valentine’s Day, we’re sharing five of our staff’s national park-based love stories, which affirm what many of us have always believed: that aside from their ability to connect us to nature, national parks have the power to connect us to one another. May these stories remind us all of the magic of a meet-cute and the comfort of a lifetime commitment.

Alex (right) and Pete at Black Canyon of the Gunnison National Park.

Alex and Pete’s relationship has been defined by parks. Meeting in 2004 while students at Northland College in Wisconsin, the two spent their first dates hiking around nearby Apostle Islands National Lakeshore, that picturesque cluster of islands and sea caves nestled in the southwestern tip of Lake Superior.

Over the next seven years, the pair hopscotched from park to park, working seasonally in national parks from Alaska to New Mexico. They rarely secured jobs in the same place at the same time, but they prioritized time together during the offseason and planned extended trips to places they’d never been.

In 2011, while returning from an 1,800-mile paddle along the Yukon River and through parts of Klondike Goldrush National Historical Park and Yukon-Charley Rivers National Preserve, Pete proposed. Alex, who had planned to pop the question himself, accepted. “You realize whether you can or cannot live with someone after two months in a canoe,” he joked.

Their February 2013 wedding (which was not legal in Montana at the time) took place just north of Yellowstone National Park in Paradise Valley, a place they both hold dear. For their honeymoon, the couple traded the mountains for the subtropics, paddling 200 miles through the Everglades’ vibrant and meandering waterways, across the expanse of Florida Bay and on to the Florida Keys.

A few months later, when Proposition 8 was overturned in California and same-sex marriages were again legal in the state, Pete and Alex secured protections for their commitment with a ceremony inside a sequoia tree in Yosemite National Park, their home base at the time. Then, in 2015, a photo of them kissing on the rocky ledge of the Black Canyon of the Gunnison was retweeted by the Department of the Interior in affirmation of the Supreme Court’s marriage equality decision.

The two maintain a long-distance relationship, navigating the miles between Pete’s home in Colorado and Alex’s in Alaska. They’re currently charting out their next park adventure: a paddle trip through Gates of the Arctic National Park and Preserve.

Alex Johnson has been a program manager in NPCA’s Alaska Regional Office since 2018. A Wyss Scholar, he earned a master’s in environmental studies from the University of Montana.

Diane and Dan with daughters Mara (left, on Diane’s back) and Rona at Schiller Woods Forest Preserve in Chicago.

It sounds like the setting of a romantic comedy: Diane met her husband, Dan, in 2004 while on a weeklong backpacking trip in Sequoia National Park. Diane’s good friend, Todd, organized the summertime trip and invited her and his childhood buddy, Dan, to join him.

The trio met in Chicago to begin the 2,000-mile drive to California. Once there, they donned their packs and took to the trail. As the days and miles unfurled, they settled into an easy rhythm, relishing the camaraderie of camp life in the striking Sequoia landscape.

“A backcountry experience can pretty quickly reveal how compatible you are with a person (for better or worse!),” Diane said, “and we just clicked.” She and Dan spent early mornings sipping coffee by mountain lakes and long nights talking about matters both trivial and profound. By week’s end, Diane was falling in love.

After the trip, they returned to their respective lives, with Diane starting her senior year at the University of Wisconsin and Dan resuming his video production job in Chicago. Six months after graduating, however, Diane moved to Illinois to be closer to Dan.

In 2013, Todd — that unwitting matchmaker — officiated their wedding.

These days, Diane and Dan frequent a local nature preserve in Chicago with their 3-year-old twin daughters. They hope to take their first national park trip as a family this summer.

Diane Gerrish joined NPCA in 2015 as the Midwest regional director of development, a role that helps secure mission-critical funding. She received her bachelor’s degree in journalism from the University of Wisconsin-Madison.

Ernie and Elsbeth on the top of Matterhorn Peak at the northern boundary of Yosemite National Park in 1989.

Ernie met his wife of 28 years, Elsbeth, while working as a seasonal ranger at Bandelier National Monument in 1987. It was a blustery, snowy Thanksgiving eve when Elsbeth, a road-tripper from Boulder, Colorado, came into the visitor center to inquire about backpacking. The next day, she returned. Her friend, and the only other camper in the park campground, had departed, and the heavy snowfall had derailed Elsbeth’s backcountry plans. Intrigued by this visitor’s recent nine-month sojourn in South Asia, Ernie offered to be her hiking buddy.

They spent the day exploring the mostly deserted park, wandering through Frijoles Canyon and clambering up ladders to view the ancient dwellings carved high in the tuff cliffs. Though he declined to elaborate, Ernie said, “There was a moment when something clicked” after they’d climbed 140 feet up to reach Alcove House. As the daylight waned, he invited Elsbeth to join him for Thanksgiving dinner at a friend’s house that night. She accepted.

Over the next three years, Ernie and Elsbeth’s relationship — buoyed by their mutual love for national parks and wild places — blossomed. They backpacked throughout the Four Corners region, secured seasonal positions together at Mesa Verde National Park, led an outdoor semester program while living in tents and then headed west to teach environmental education programs to school children in Yosemite National Park. 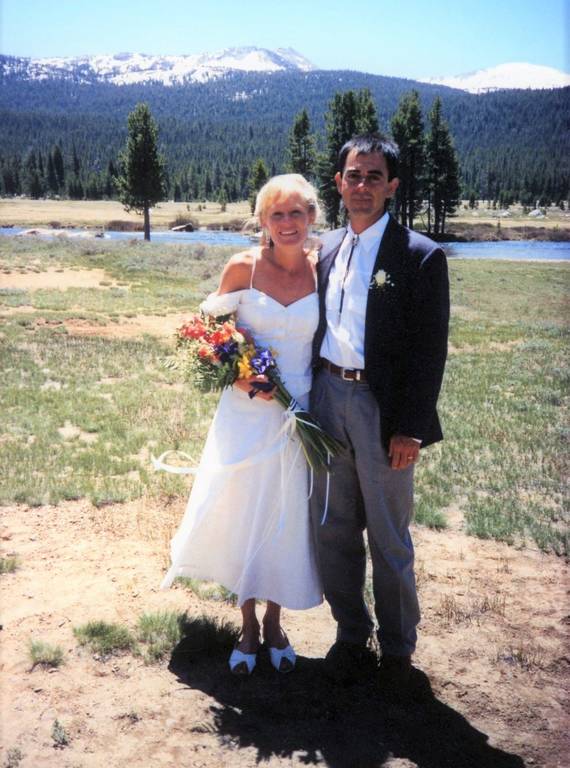 Ernie and Elsbeth at their wedding in Tuolumne Meadows, Yosemite National Park, in 1991.

In June of 1991, they were married in the park’s Tuolumne Meadows, a popular sub-alpine destination. Though the site regularly experiences both blizzards and floods, Ernie recalls the weather being “picture-perfect” for their special day.

The newlyweds then spent five months trekking through Nepal and India before starting work as seasonal rangers on the North Rim of the Grand Canyon the following summer. It was there that Ernie and Elsbeth spent their first anniversary, backpacking on steep trails through the deep past as revealed on the canyon’s multilayered walls.

Twenty-three years ago, they came back to the state where their story began, New Mexico. Their park travels continue to this day.

Ernie Atencio joined NPCA in 2016 and is now the Southwest regional director. Previously, he served as executive director of Taos Land Trust for nine years, and he has received a “Voice for the Land” award from The Wilderness Society and a “Leadership in the Radical Center” award from the Quivira Coalition.

From the start, Ulla and Doug knew they wanted an outdoor, destination wedding. Though they live in the mountains of North Carolina, they hail from opposing coasts and share a deep-seated love for the ocean, so a ceremony along the water’s edge seemed ideal. 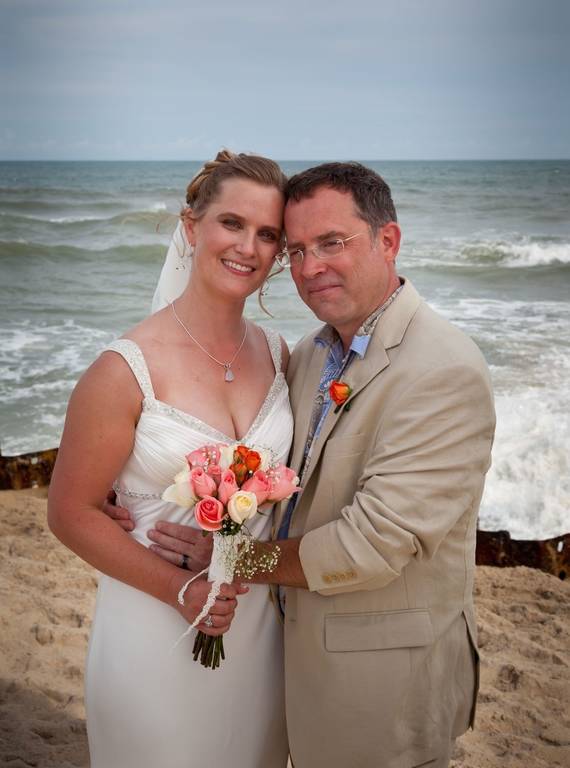 Ulla and Doug on their wedding day at Cape Hatteras National Seashore.

After weighing the pros and cons of various locations, they decided on an intimate wedding at Cape Hatteras National Seashore, more than 400 miles away from their Asheville home. For Ulla, the fragility of the park played a role in their decision. “It’s a place, I recognize, that probably won’t be around forever,” she said.

Forming a widow’s peak in the Atlantic Ocean island chain known as the Outer Banks, the park occupies a wedge of sand that is — like its island neighbors — routinely hammered by severe storms. In response to continued beach erosion, the National Park Service relocated the 19th-century Cape Hatteras Lighthouse, striking for its black-and-white barber pole design, farther inland in 1999. The lighthouse’s original foundation was left in place, at the mercy of the sea.

Twelve years later, in the summer of 2011, Ulla and Doug exchanged vows within that 140-year-old circle of stones. Their windswept ceremony included 30 of their closest friends and family members, some arriving from as far away as Haiti and Germany. After the service, in an ode to the “Hands Across the Sand” movement (which grew into an international phenomenon the year before in response to the BP oil spill in the Gulf of Mexico), the guests formed a hand-linked chain across the beach as a symbolic gesture of solidarity and protection.

The bride and groom spent the next few days enjoying the area, reveling in the landscape that Ulla calls “a wild, beautiful place.”

Ulla-Britt Reeves is NPCA’s senior advocacy manager for the Clean Air program. With a Master of Environmental Management degree from Duke University’s Nicholas School of the Environment, she has been helping to protect our parks from the impacts of a changing climate since 2015.

Don & Lisa – Serendipity in the Smokies

Don and Lisa in the Roan Highlands of North Carolina on their 2009 wedding day.

Don and Lisa met in 2005 while backpacking in Great Smoky Mountains National Park. For Don, this was an annual tradition dating back to his college days. Each year he’d take the four-day Thanksgiving weekend and hit the trail with whichever friends were free. That particular year, four of them were making a loop from the dappled woods of Cades Cove to two of the park’s high-elevation grassy balds and back.

On their first night, Lisa walked up while they were gathering firewood. A solo backpacker tackling the loop in reverse, she made herself at home amongst Don and his friends. “That’s just what you do,” Don said. “When you’re in the backcountry, you basically just become a team or family.”

The next morning, before they went their separate ways, Lisa offered Don and his friends her cutting-edge sleeping pad. The men, unlike Lisa, still had another night on the trail. After swapping phone numbers, they made tentative plans for Don to return the pad when he got back to Knoxville, his and Lisa’s hometown.

Nearly a week later, Lisa called an apologetic Don. He had lost her phone number and had had no way to reach her. Feeling as if he owed her, he offered to buy her dinner.

That dinner led to a keen friendship, which ultimately — and to the surprise of them both — led to something more.

On a beautiful day in April of 2009, Don and Lisa set out for another grassy bald, this time in the Roan Highlands of North Carolina. After hiking 3 miles along the Appalachian National Scenic Trail to Grassy Ridge Bald, they were married by a park-loving minister before three of their friends. The bride’s only concession to the occasion was a pink top and a small veil.

Don and Lisa’s enthusiasm for the outdoors remains a constant in their lives. Most recently, they returned from a jaunt in Big South Fork National River and Recreation Area in Kentucky and Tennessee over the winter break.

Don Barger founded NPCA’s Southeast Regional Office in 1992 and served as regional director for 27 years. He now shares his campaign-building expertise with the organization in his capacity as senior adviser.