One researcher gives us a glimpse behind his underwater camera

Olin Feuerbacher’s photograph, “Devils Hole Pupfish,” is remarkable. For starters, the subject is not any old fish but the rarest fish in the world. Fewer than 200 of the diminutive Devils Hole pupfish currently survive. Their habitat? A seemingly bottomless cavern in an oasis of geothermal springs in the searing desert of western Nevada, within sight of Death Valley National Park.

On Love and Pupfish

Olin Feuerbacher and his wife, Ambre Chaudoin, work on cooperating teams monitoring and researching Devils Hole pupfish. They met and fell in love as they worked together to puzzle out the unknowns of this critically endangered fish. Feuerbacher works for the U.S. Fish and Wildlife Service and Chaudoin works for the National Park Service.

While Feuerbacher works primarily in what’s called the Refuge Tank, a simulated underwater environment at Ash Meadows that harbors the only existing captive population of Devils Hole pupfish, Chaudoin’s graduate research used underwater videography to determine how environmental conditions affect spawning. In April 2010, Chaudoin’s videos captured serious “sloshing” in Devils Hole, the result of shockwaves from an earthquake in central Mexico. It was the first time video recorded how Devils Hole pupfish respond to dramatic disruption in their environment. She continues to use underwater videography as a tool in monitoring the Devils Hole ecosystem as part of her work with the National Park Service.

This is one of Feuerbacher’s photographs from the captive population at the Ash Meadows Fish Conservation Facility.

Feuerbacher’s photo is notable for several reasons, including the way it captures the sunlight on the water and reveals a little part of a shallowly submerged limestone shelf. Because for most of the year, the way Devils Hole is configured, its water surface is shaded. And the limestone shelf — essential to the spawning and ultimate survival of this endangered fish — is something you can’t see in such detail by looking down into the cavern.

Then there is the photo’s composition and its exacting detail. One single pupfish, less than an inch in length, turns to the camera to show off its teeny-tiny fish scales and feathery-looking tailfin, and seems to look up at the camera with what might be described as … a smile.

“Swimming in Devils Hole is a surreal experience,” Feuerbacher explains. “The water is nearly bathtub-warm and crystal clear, with shafts of sunlight penetrating into the turquoise depths. Floating in the water, you feel weightless, suspended above a limestone cave and surrounded by curious blue pupfish.”

As an aquaculturist at the Ash Meadows Fish Conservation Facility, Feuerbacher has the rare privilege of photographing the Devils Hole pupfish. Few researchers are allowed in the Devils Hole cavern, and even fewer are allowed to enter the water. They must conduct their underwater studies during very strict windows of time — generally, only on six scheduled days each year.

On those designated days, divers slip into the water slowly, carefully. The water is a constant 93 degrees. The pupfish are, at first, a little bit shy, says Feuerbacher. The Devils Hole pupfish have no predators — no turtles or big fish — and no other types of fish compete for their scarce sources of food. The water they inhabit has a very low level of dissolved oxygen and very little organic material. Their environment is, in fact, so lacking in what other fish need to survive that scientists regularly monitor the composition of the water and study the conditions that perpetuate spawning. 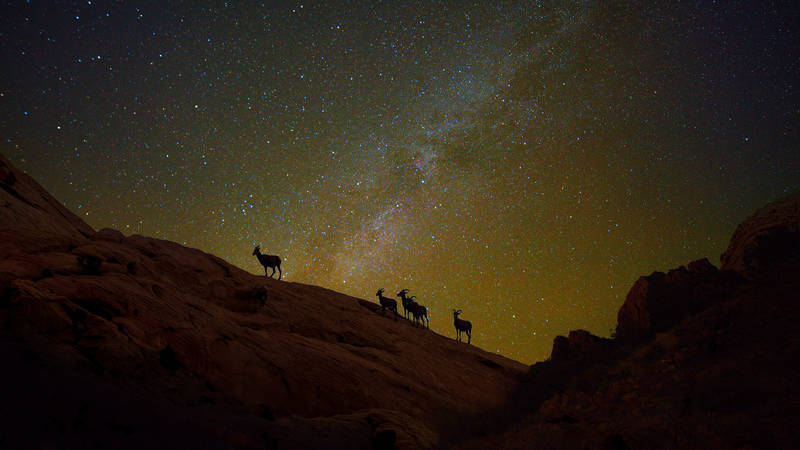 “My work is primarily focused on developing methods for establishing and maintaining the only captive colony of these fish. Most of the captive population is housed in a 100,000-gallon system that simulates the challenging environment of Devils Hole,” says Feuerbacher. “One of the goals of this population is to serve as a ‘lifeboat,’ should anything catastrophic happen to the wild population. This captive population is also helping scientists understand the unique genetics of this isolated species and learn how this species survives in an environment that would be lethal for most fish.”

Feuerbacher says the pupfish are unaccustomed to visitors but soon get beyond their shyness and curiously approach. They seem fascinated with their reflections in the divers’ masks.

Feuerbacher uses an SLR (single lens reflex) camera with a macro lens to snap hundreds of photographs. The pupfish dart from side to side, here to there. Patience is required. Feuerbacher says he has plenty of photos he thought might be something but instead turned out to be … only fishtails as the creatures darted away.

“My fascination with this ecosystem stems largely from the uniqueness of the region,” says Feuerbacher. “Imagine being in the middle of the desert and entering a crack in the side of a hill that descends hundreds of feet into the aquifer, inhabited by a small population of fish, the sole members of their species.”

Feuerbacher’s photo is part of a special exhibit organized by the National Parks Conservation Association that showcases Nevada’s federal lands. It and 16 other exceptional photos are on display this week in the rotunda of the Russell Senate Office Building. The exhibit will be shown in Nevada over the next year.