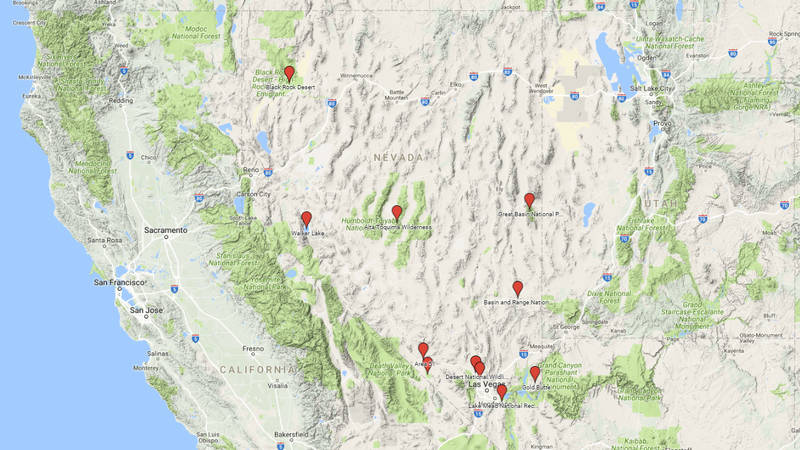 See where artists captured some of the photographs in the exhibit.

Nevada is a state of spectacular geography, unique natural features and poignant history. It is defined by its public lands — national parks and conservation areas, wilderness and wildlife refuges, forests, rangelands, and watersheds — all of which provide diverse benefits to Nevadans and the travelers who visit.

It is also a place of inspiration for the photographers who find beauty in its rugged geology and starry skies. NPCA recently organized a photo exhibit themed around Nevada’s state song, “Home Means Nevada,” for display in the Senate Rotunda in Washington, D.C. The exhibit will later be presented in several locations throughout Nevada. Here is a sampling of the art our featured photographers shared, showing what it means to be home.

Great Basin National Park is a study in contrasts, harsh with rock glaciers, inviting with alpine meadows. It has some of the darkest night skies and oldest living trees in the country — twisted and gnarly bristlecone pines.

Indigenous tribes knew the Gold Butte landscape as a wonderland. It was a landscape of springs and seeps, shelter and shade, among massive and crazily shaped red rock formations. Thousands of petroglyphs adorn Gold Butte’s niches and recesses, treasured galleries of native art in the desert.

These three desert lakes are essential to several Native American communities. They are considered desert terminus lakes, meaning they are enclosed watersheds at great risk of drying up during periods of drought, presenting complex management challenges.

“Michael Heizer at the site of ‘City’”

Nevada artist Michael Heizer spent more than four decades moving and sculpting dirt, rock and concrete into a massive work of angles and shadows — the largest land art in contemporary history. Heizer’s monumental “City,” like the landscape where it is located, is a complex masterpiece.

Desert bighorn sheep were once plentiful in Nevada, but today, drought, disease and habitat loss have dramatically reduced their numbers. The Desert National Wildlife Refuge — the largest wildlife refuge in the United States, outside of Alaska — was set aside in 1936 to protect this majestic and iconic species.

“The Many Layers of Lake Mead”

This recreation area actually protects two lakes — Lake Mead, the largest manmade lake in the country, and Lake Mohave, below the Hoover Dam. Still, only 13 percent of the recreation area is water. The 1.5 million-acre national park site is a geologic masterpiece with numerous mountain ranges and colorful rock formations.

Legendary for their stamina and identifiable by their red shirts, Pony Express riders crisscrossed the country between Missouri and California, carrying precious correspondence in padlocked pouches called mochilas. Intrepid riders braved some of their toughest terrain in Nevada as they navigated daunting mountain ranges and valleys of sagebrush and greasewood.

Among rocks that are millions of years old and uncountable stars in the skies overhead, families set up their tents and unroll their sleeping bags in these expansive landscapes, finding connection with the timeless beauty of nature.

With a statewide average of less than 10 inches of rainfall, water in Nevada is precious, life-sustaining and the perfect find on a hot summer day. Most of Nevada is within the Great Basin, a region where water sinks into underground aquifers, flows into salty lakes or evaporates, never finding its way to the sea.

What lies beneath the surface of Tule Springs’ fossil beds is a unique window into our glacial past. On the edge of Las Vegas, paleontologists believe this is the only known site in the world to preserve nearly 200,000 continuous years of Ice Age fossils.

One of the cofounders of Burning Man, an annual gathering for artistic self-expression, captured an aerial view of Black Rock City as seen during this year’s festival. This image shows the astonishing amount of organization it takes to host nearly 70,000 creative people for more than a week in a temporary city. After the festival ends, organizers return the playa to its previous condition, applying a “leave no trace” ethic.

A professor of art at the University of Nevada, Reno, shows us the same general area where the Burning Man festival takes place — but here we see the expansive and desolate playa in northwest Nevada uninhabited, as the moon rises.

In the same state where people flock to the lights and excitement of Las Vegas, the vast Nevada desert offers up some of the darkest skies left in the country. This diminishing resource is increasingly precious as light pollution dims our view of the stars throughout most of the United States.

The Devils Hole pupfish is the rarest fish in the world, and one of the most studied. Fewer than 200 Devils Hole pupfish inhabit a seemingly bottomless cavern in the western desert of Nevada. Survival is the focus of cooperative research between the National Park Service, the U.S. Fish and Wildlife Service, and scientists around the world.

Area 51 is part of Nevada’s military testing and training grounds, vital to our country’s security. Experimental aircraft — including U2 reconnaissance planes used during the Cold War — were launched there, most with fake aerial identification. Few know exactly what takes place there, only that the perimeter is surrounded by security cameras and serious warnings. What about those rumors of aliens and spaceships? Perhaps best left to the imagination. This vintage interpretation shows a scene from the site as if looking through an antique device known as a stereoscope.

This rugged wilderness encompasses diverse forested areas from sagebrush to pinyon-juniper to limber pine to sparse and striking stands of aspens. A collection of three steep and jagged summits along a prominent ridgeline is a hiker’s paradise. On a clear day, from the ridge, you can see mountains in Utah and in California.