Baker, CA – Today, the Interior Department’s Bureau of Land Management (BLM) announced its decision to move forward with a modified version of the Soda Mountain Solar Project, widely regarded as the most controversial renewable energy project in the Country. The Interior Department’s decision to issue a final environmental impact report recommending the project be approved less than a quarter mile from Mojave National Preserve comes after nearly 19 months of deliberation, during which thousands of recreational users, national park lovers, scientists, and the National Park Service urged denial of the project.

“We sincerely believed the Interior Department would deny this project due to the known harm to a critical desert bighorn population, the outcry from hundreds of local stakeholders including the BLM’s own advisory council, and the agency’s policy to relocate renewable energy projects that harm national parks” said David Lamfrom, California Desert Associate Director for National Parks Conservation Association. “This decision breaks trust with our desert community and contradicts BLM’s professed desire to balance energy development with the protection of special places. This is not balanced decision making. No one thinks this is a wise decision for the Mojave Desert or those of us who live and work here.“

In its press release, the BLM noted the active transmission and transportation corridor in the project site area. Missing from the statement is the project site’s location, less than one mile from Mojave National Preserve, which welcomed more than 550,000 visitors in 2014 who spent more than $31 million in communities near the park, supporting over 450 jobs. In April, 120 business leaders, Bureau of Land Management (BLM) stakeholders, scientists, and former Interior Department employees petitioned the Interior Department to designate Soda Mountains an Area of Critical Environmental Concern (ACEC). 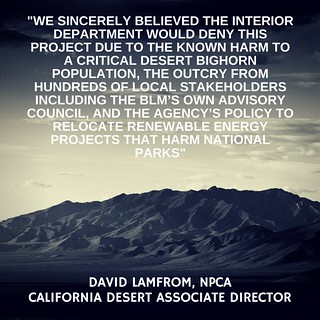 "We have worked in partnership with BLM for decades to become a gateway community to the wild and beautiful country surrounding our desert town,” said Jacob Overson, manager of the Baker Community Services District. “Now the BLM is deciding to industrialize a neighboring valley important for bighorn sheep, for tourism, for education and our way of life.”

The BLM’s final environmental impact report will include a 30-day “protest” period before the agency can issue its record of decision on the project.