Fort McHenry National Monument and Historic Shrine in Baltimore, Maryland, is probably best known for its famous flag, which billowed over the star-shaped ramparts after a fierce British attack during the War of 1812 and inspired Sir Francis Scott Key to write the Star-Spangled Banner.

#{image.caption}
Approximately 6,600 schoolchildren form the largest living flag of its kind on September 9, 2014 at Fort McHenry National Monument and Historic Shrine in Maryland. Photo by Greg Pease, courtesy of the Friends of Fort McHenry.

Earlier this week, nearly 7,000 schoolchildren and volunteers commemorated the 200-year anniversary of the rockets’ red glare by creating a living flag with their red-, white-, and blue-clad bodies—the largest such flag ever assembled.

This celebration may have been the biggest of its kind, but it wasn’t the first. Participants at the 100-year anniversary of the War of 1812 also formed a living flag. One of the original participants, Myrtle Sanders, who was just three months old at the 1914 event, was also able to attend this week’s flag ceremony. 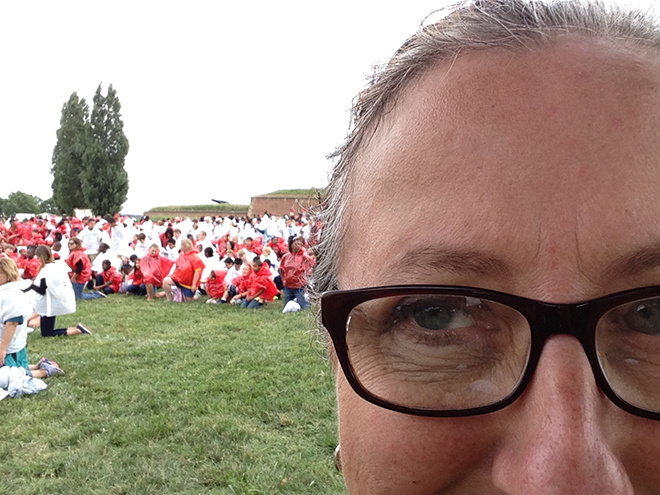 The author takes a selfie with some of the participants. Photo courtesy of Pam Goddard.

She wasn’t alone. According to the National Park Service:

I was proud to volunteer with NPCA at the living flag commemoration and will return to the historic fort for more bicentennial events this weekend.