How a foot race helps one Pennsylvania town remember a historic tragedy.

“You’re the nicest bunch of 200 people I’ve seen,” joked Clifford Kitner as he surveyed the dozen or so runners shaking out limbs and bouncing on their toes in the 57-degree mist of a late May morning. From this sheltered spot, a half mile as the crow flies from Johnstown Flood National Memorial, you could hear the rushing water of the South Fork of the Little Conemaugh River but not see it.

Kitner, the executive director of the Cambria County Conservation and Recreation Authority, had expected a larger crowd. After all, hundreds of people had registered for the race, and some 170 people had signed up for the full-length 14-mile course. But given the optional rolling start (a concession to the ongoing pandemic), only a ragtag cluster remained to embark on the race together. As watches and phones hovered at 7:59 a.m., Kitner counted down.

At zero, the group jogged along the gravel path and disappeared into a tunnel of trees. The course follows the river along the Path of the Flood Trail. Runners cross the open expanse of a reclaimed coal mining waste site (locally called a “boney pile”), pass through the picturesque Allegheny Portage Railroad National Historic Site’s Staple Bend Tunnel (a 901-foot-long flickering cocoon, thanks to dozens of paper bag luminaries), and crest a few steep hills before dropping into the sleepy Saturday morning streets of Johnstown, Pennsylvania.

The trail, in keeping with its name, mirrors the route taken by a deadly deluge more than 100 years ago. On May 31, 1889, an earthen dam at the foot of Lake Conemaugh burst after record rainfall. Water roared down the valley, draining the 2-mile-long manmade lake within an hour. Downstream, a 40-foot-high tidal wave derailed trains and hoovered up trees, rocks and homes. Firsthand accounts paint a horrifying picture of the devastation: houses “crushed like eggshells, against each other” and “whole blocks swept away as if by magic.” The flood not only took the lives of 2,209 people, it left 27,000 residents homeless and paved the way for disease, such as typhoid, to rage through the community.

News of the flood captivated the nation, jump-starting a monthslong relief effort.

Johnstown eventually rebuilt, nearly doubling its population within two decades as immigrants and industry titans arrived to stoke the glowing maws of the town’s steel and iron mills, using ore and coal quarried from nearby seams. The town’s location — snugged between the folds of the Allegheny Mountains and the coursing waters of the Little Conemaugh and Stonycreek rivers — proved as much a curse as a boon, however. Repeat, if less severe, floods battered Johnstown throughout the 20th century. Then in the 1990s, the steel mills closed, and the town’s economy imploded, dragging its identity with it.

Once again, Johnstown proved resilient. Rather than viewing its flood-stricken, boom-and-bust past as an encumbrance, the community chose to celebrate its rich heritage. Blocks of brick-faced mills and miles of snaking railroad tracks combined with active preservation efforts and a host of historical markers ensure that the town’s manufacturing heyday remains front of mind for those visiting the century-old downtown. A few miles away, Johnstown Flood National Memorial preserves the tale of that defining disaster while Allegheny Portage Railroad National Historic Site protects a transportation corridor between Pittsburgh and Philadelphia that was hewn by grit and ingenuity in the 1830s.

BARTON TO THE RESCUE

Five days after the flood of 1889, 67-year-old Clara Barton arrived from Washington, D.C., along with workers from the American Red Cross. It would be the organization’s first major crack at disaster relief. The Philadelphia Red Cross also rushed to the scene to provide much-needed medical aid, but Barton focused her efforts on sharing supplies — clothing, food and furnishings — and overseeing the construction of “Red Cross hotels” and prefabricated homes for the stranded townspeople. She remained in town for nearly five months, to the everlasting gratitude of the Johnstown residents. In 1892, the town sent Barton a check to aid in the Red Cross’ Russian famine relief efforts. And 125 years after the flood, local dignitaries dubbed a river crossing near the Peoples Natural Gas Park the Clara Barton Memorial Bridge.

Meanwhile, the town began leveraging its aging infrastructure as a springboard for reinvention. A former Carnegie library found new life as the Johnstown Flood Museum. A couple of blocks west, an octagonal blacksmith shop dating from the late 1800s became the centerpiece of the burgeoning Center for Metal Arts, a 21st-century forging school. Carved into a hillside to the south, the Inclined Plane — a specially designed rail to convey people, animals and materials up a hill with a 70% grade — transitioned from serving the now-shuttered Cambria Iron Company to shuttling tourists. Soon, the Johnstown Train Station, a stately relic from 1916, will be transformed into a town visitor center.

In this 20,000-person burg, where past and present are encouraged to rub elbows and revitalization reigns, commemorating the catastrophic 1889 flood with a community race seems entirely apropos. Johnstown has “had its time,” said Rich Sievers, who has run in seven of the eight Path of the Flood races. “But events like this are helping.”

Of course, new endeavors often need masterminds. Enter Mark Voelker. A contracted helicopter pilot with the U.S. Forest Service and retired U.S. marine, Voelker conceived of the race in 2008 after flying over the area. He’d read David McCullough’s book about the tragedy and run pieces of the flood path as part of his military training. But when he saw the valley laid out below him and imagined 20 million tons of water churning over the South Fork Dam and barreling toward town, inspiration struck. He recalls thinking: “It kind of would be a crime if we didn’t do this.”

Voelker approached the National Park Service and the Johnstown Area Heritage Association about his vision in 2012. His original plan was modest: a one-time race in 2014 to coincide with the 125th anniversary of the flood. But the nearly 500-person turnout and community enthusiasm convinced him to make the event an annual tradition.

Stephanie Daniels, longtime leader of the local running club and the daughter of a steel mill worker, said she’s particularly fond of the last leg of the course, which flanks the darkened mills. She has participated in marathons around the country but said there’s something special about her hometown race. “It has beautiful scenery, and it tells a story,” she said. “I love the fact that it tells a story.”

Though the event has evolved over the years — runners now have their choice of three course lengths — the inviolable aspects for Voelker remain the same: a clear focus on history, free registration for those under 18, and proceeds that benefit Johnstown. 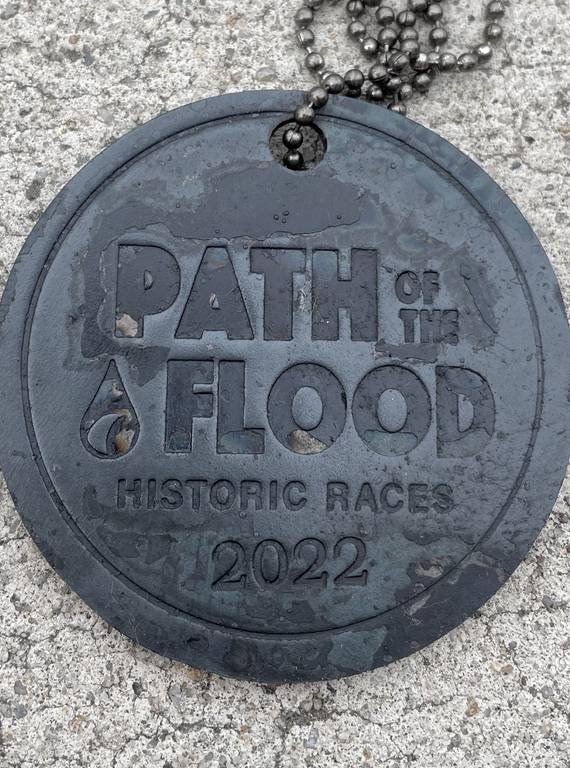 Each runner recieved a medal forged at the local Center for Metal Arts.

©KATHERINE DEGROFF/NPCA
Activating this link will open a larger version of the image in the same window for a more detailed viewing. 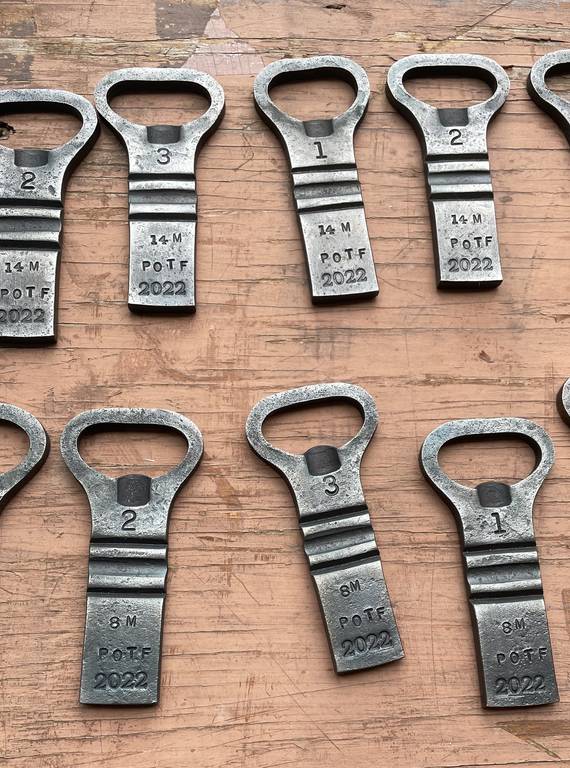 The top three finishers in each distance took home a custom bottle opener.

Next year, organizers anticipate that a new, roughly half-mile segment of the trail will allow runners of the 14-mile course to start at the breast of the failed dam and pass through the historic lakebed. The county recreation authority, which has expanded off-road sections of the trail since 2002, is partnering with the Park Service to secure funding for this last (rather first) piece of the puzzle. Once completed, the entire trail “will be as close to the path of the flood as you can get without running down the middle of the river,” said Deb Winterscheidt, who serves on the race committee in her role as director of development and member services with the Johnstown Area Heritage Association.

On race day, Daniels suited up in her bib and took her place at the 14-mile starting line beside Kitner. When asked about their favorite part of the trail, several runners laughed before chorusing “the finish.” A man with gelled hair and two water bottles strapped to his chest piped up: “When they hand you a glass with a ticket for a free beer.”

By the time this spirited contingent of 14-milers set out, several people who’d opted for an earlier start and a shorter distance had already trickled over the finish line and into Peoples Natural Gas Park, a brownfield site turned concert venue. No one seemed the least bit bothered that the after-party kicked off before 8 in the morning and wrapped by noon. Brandishing their custom medals and stamped beer openers that were hand-forged at the nearby Center for Metal Arts, participants headed to the corner bar to sample a pour from the local brewery. A few flopped onto the massage tables in the medical tent. Others grabbed a slice of pizza while the Whiskey River Panhandlers plucked and strummed on stage.

Though race times were posted and Voelker took the stage to announce the winners for each course length, speed seemed an afterthought for most of the 546 runners in attendance. Even the top men’s finisher in the 14-mile category, Dean Banko, who cruised to the front with a time of 1 hour and 25 minutes, appeared more interested in cheering his buddies toward the finish and talking to out-of-towners than celebrating his win.

Every now and then, someone would mosey down to the Stone Bridge, an unassuming landmark a stone’s throw from the festivities. Here, against the bridge’s stalwart arches, the roiling waters came to a stop 133 years ago — a fact that the town, and these runners, have never forgotten.

A Hoof Too Far