Collapsing Homes Threaten One of Our Most Popular National Seashores

A collapsed home surrounded by debris in Rodanthe, North Carolina, taken in May 2022.

Cape Hatteras National Seashore is a popular tourist destination drawing millions of visitors each year to its beaches, lighthouses and other attractions. But eroding beachfronts are causing homes to collapse into the ocean, littering the shore with debris and creating new concerns for the park and the safety of its visitors and wildlife. 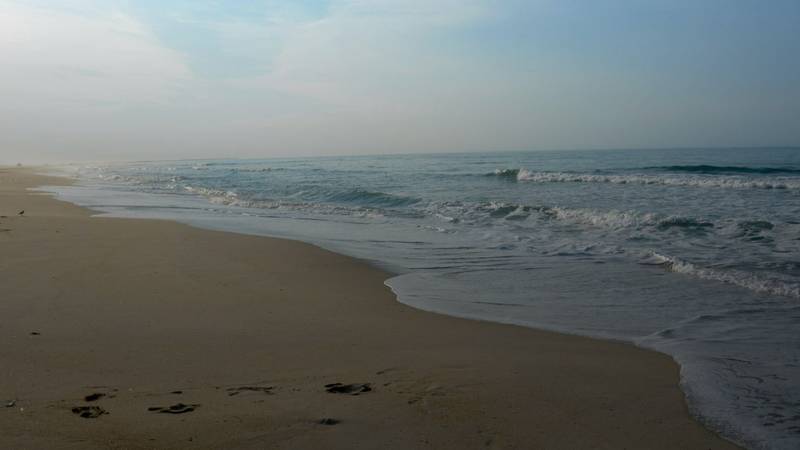 Earlier this year, a series of nor’easters brought swells, high winds and rough water to Cape Hatteras, destroying one house in February and two more in May. Park ranger Mark Seaman captured the collapse of one of the homes in a video that received widespread media attention. The home broke up in the surf, spreading debris over 14 miles of the beach. The wreckage — which included various contents of the home, from roofing material and nails to broken glass and drywall — represented a major public safety hazard and caused beach closures.

Though the houses themselves are not managed by the National Park Service, park staff have had to quickly respond to the damage and address safety concerns as debris washed up on the seashore.

Park staff were already struggling with a limited budget to provide visitor services, such as lifeguards, educational programs and resources to manage beach traffic. Now, daily sweeps of the beach are taking time away from these visitor services. Cape Hatteras is one of the few places in the world where threatened loggerhead turtles nest, laying their eggs in the sand; in addition to the threats to human visitors, this debris could cause serious hazards for nesting mother turtles, their hatchlings and other park wildlife. The park has no designated funds to clean up beach debris of this magnitude.

Debris litters the beach in Rodanthe, North Carolina, after two homes collapse in May 2022.

Still, staff have responded to the challenge. As soon as it was safe, the National Park Service worked with volunteers and contractors to remove much of the large debris from the beaches. The smaller debris has been harder to deal with. Park Superintendent Dave Hallac noted in a recent story on E&E News: “It’s a very sad situation right now. … There’s tar paper, pieces of wood, nails, pieces of insulation, foam, drywall, carpet padding … a lot of it’s already covered up by the sand.”

Since the collapses, there have been reports of people stepping on nails and getting injured by debris in the surf. Warnings at the park now advise beachgoers to wear sturdy shoes between the towns of Rodanthe and Salvo due to “the presence of wood with exposed nails, splintered wooden fragments and other debris that could be harmful to beachgoers without hard soled footwear.” This debris can be difficult to see, mixed inches-deep into the sand for miles along the shore.

Park Service staff continue to clean up the smaller debris, which, if left on the beaches, could be picked up and spread farther by future storms. Emily Jones, the Southeast regional director for NPCA, reported that the overall cleanup efforts have cost the Park Service well over $100,000 in staffing and equipment so far.

Debris litters the beach in Rodanthe, North Carolina, after two homes collapse in May 2022.

Although homeowners have been responsible for removing much of the large debris, the ongoing nature of the cleanup efforts means that, at least in the short term, the Park Service has footed much of the bill, even though the park was not established to manage private structures such as these. Proactively moving or demolishing at-risk homes would be much less expensive and cause less damage than cleaning them up after they collapse, but homeowners are unable to access insurance payouts until the homes collapse, disincentivizing people to take expensive preventive action before a disaster strikes. 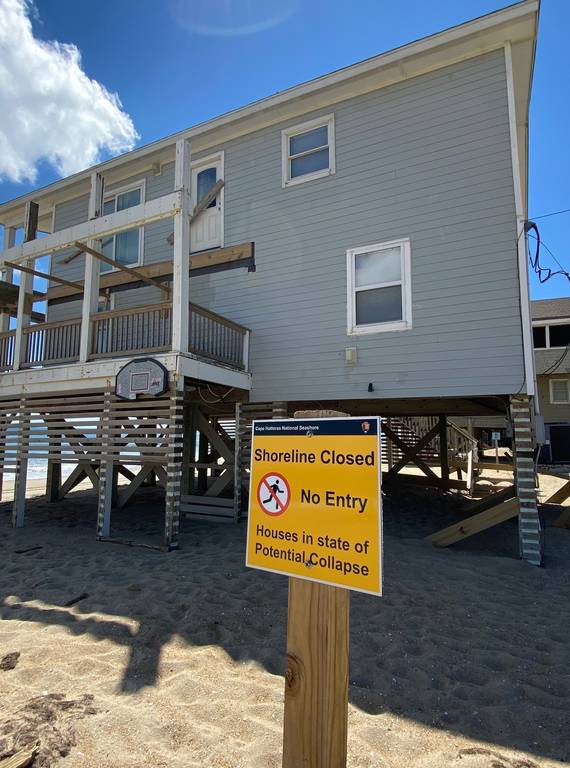 Home collapses are not new to Cape Hatteras. Local news reports reference at least five other homes destroyed this way in the last five years. And these risks will continue due to the nature of rapid erosion on these barrier islands. In addition to the three homes that have already collapsed this year, the park has identified nine others that are at imminent risk of falling into the sea.

The same dynamics of coastal erosion were also the driving force behind the relocation of the iconic Cape Hatteras lighthouse nearly 25 years ago. Originally built 1,500 feet from the shoreline in 1870, erosion threatened the lighthouse as early as the 1930s. In 1999, the Park Service undertook an elaborate process to lift the 4,830-ton structure from its foundation and transport it 2,900 feet on a system of hydraulic jacks to prevent storms from threatening the historic building.

Coastal erosion is a natural phenomenon, and climate change is accelerating this process in many places. During large storm events, sand can erode from the beach and be pushed past dunes and create deposits. These sand deposits, called overwash, allow barrier islands to migrate in response to sea level rise and changing storm conditions in a process called barrier island migration — according to Hallac, the park loses three to four meters, or up to 13 feet of its shoreline, a year. “It’s changed dramatically,” he said in a recent news story on 13 News Now. “I mean, I almost don’t even recognize the area.”

While barrier island ecosystems have evolved to be resilient to these changes, they pose a risk to infrastructure. Despite the well-established science on barrier island migration and the history of building collapses, homeowners purchased several of the recently destroyed homes in the last three years. One sold in 2019 for $519,000 and another in 2020 for $275,000. Just as flooding and wildfire risks are assessed and disclosed, the risk of collapse should have been clear to the buyers. Indeed, one of the listings explicitly stated: “This home was damaged from storms in 2019 but several repairs were just completed. … This area experiences ocean overwash which requires sand removal but the home is priced accordingly.” When collapses inevitably happen, the Park Service, taxpayers and other homeowners absorb the cost of these investment properties through insurance payouts and beach cleanups.

Piles of debris collected from the wreckage of two collapsed homes in Rodanthe, North Carolina, May 2022.

The situation is a dramatic example of the effects of coastal erosion. But Cape Hatteras is not alone. Ten of our 88 coastal parks are barrier islands, and together they comprise over 20% of the coastline in the National Park System. Because climate change is leading to longer and more intense hurricane seasons, homes may continue to end up in the water, and without action to remove them before they fall, more of their remains could soon become scattered along our shores. The Park Service is already buckling under the perfect storm of low staffing, record high visitation and billions of dollars in maintenance and repair needs without added threats such as these from outside park borders.

The problem is complex, but NPCA is working on multiple fronts to help, meeting with park staff and community members to find a path forward and advocating for robust federal funding, such as the recent Inflation Reduction Act, to give national parks the staffing and resources they need to help them better withstand the worsening impacts of the climate crisis. We must meet the challenge head-on so that the Cape Hatteras we know and love remains a safe and beautiful place for everyone.