Adventure eloping is on the rise as couples increasingly steer clear of lavish weddings and opt for pandemic-appropriate ceremonies in the great outdoors.

On their wedding day, Allison and Kyle Little clambered over moss-covered rocks, he in a dark blue suit and she in a billowing, diaphanous gown and hiking boots. Photos show them crossing a rushing river on a narrow bridge, exchanging gifts while sitting on a fallen log, and, on a rocky outcrop surrounded by snow-laced mountains, saying their vows. Aside from the ancient stands of hemlock and cedar in Washington’s North Cascades National Park, the only witnesses were a random hiker they recruited at the last minute and a pair of photographers, themselves a married couple, who travel throughout the West arranging and photographing elopements in spectacular natural settings.

“Unlike most couples we know who are getting married this year, we didn’t have to change anything,” said Allison, 30, of Des Moines, Iowa. “We had decided we wanted to elope pre-COVID-19. We both come from big families and even a ‘small’ wedding for us would have meant more than 100 people. I don’t like being the center of attention, and I wanted our wedding to be quiet and low-pressure, but also the coolest thing we had ever done together.” 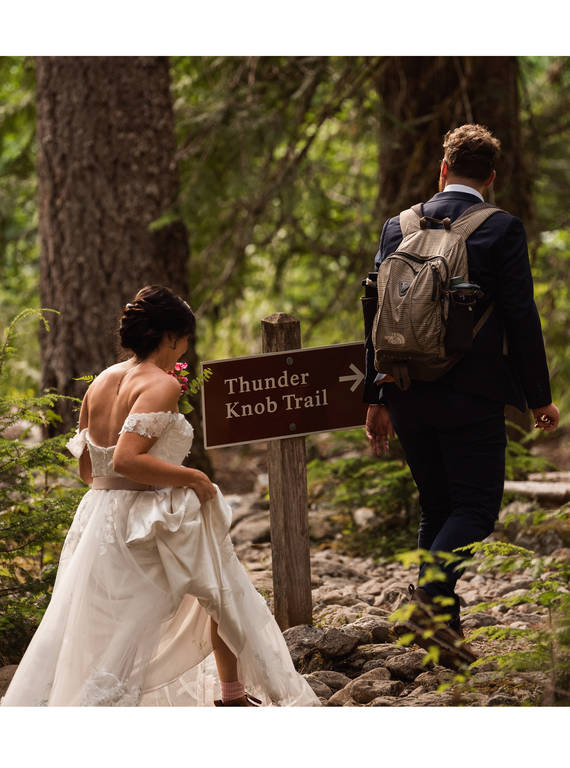 “I wanted our wedding to be quiet and low-pressure, but also the coolest thing we had ever done together,” said Allison Little, pictured on her wedding day with her groom, Kyle Little, in North Cascades National Park.

So Allison, who works in media marketing, perused social media looking for memorable elopement ideas. That’s how she stumbled on the concept of “adventure elopements” — tiny weddings in awe-inspiring surroundings, often national parks. That’s also how she found Jess and Austin Drawhorn, the couple who ultimately photographed the wedding.

The Drawhorns are forging a path in a burgeoning — and rapidly expanding — field. They’ve styled their operation as a sort of one-stop shop: They fill the roles of both photographers and wedding planners, offering recommendations on hairstylists and hiking boots, and securing permits to shoot in national parks. Jess also officiates at most of the ceremonies.

“We get to know our couples really well. It honestly feels like a first date, the first time we talk,” said Jess. “We know we’re going to be part of their wedding day, a story that they’ll be telling for decades.”

The vicissitudes of life in 2020 seem to have stirred further interest in adventure elopements, said Jess, who has seen a tenfold increase in emails from potential clients. Many couples are wary of paying hefty down payments for big, traditional weddings in this uncertain era. They don’t want to plan a massive gathering that could expose family and friends to a dangerous disease — or that could be barred by local health officials. Yet couples crave something that feels more momentous than a courthouse wedding. Perhaps what is most appealing about an adventure elopement is the sense of creating a deeply personal ceremony. And having dozens of stunning photos is a big draw, too.

Nick Edmundson, who runs Wandering Weddings, a site for couples seeking elopement vendors, said interest in adventure elopements had grown steadily in recent years and then exploded following the outbreak of the COVID-19 pandemic. “A year ago, the site would get 30 to 40 organic clicks a day. Now we’re seeing 800 to 1,000 clicks and 1,400 to 1,500 users on our site each day,” he said.

The 400 or so photographers featured on Wandering Weddings have names reminiscent of indie bands; in Colorado alone, you can find Silk & Thorn, Map and Compass, and Root and Blossom. Most of the photography businesses were born in the last five years, although it’s tough to pinpoint when the trend began, Edmundson said. He attributes the increase in adventure elopements to a rising interest in outdoorsy culture and millennials’ desire to eschew staid traditions — and enormous price tags. (The cost of adventure elopements varies, but the cheapest packages, with photographers arranging many of the details, start at several thousand dollars.) Moreover, many young adults who identify as spiritual but not religious are steering clear of weddings in houses of worship yet seek to exchange vows in sacred and timeless places.

Though any number of wild spots fit the bill, national parks such as Redwood, Mount Rainier, Yosemite, Olympic, Rocky Mountain and Canyonlands are obvious candidates. Each park has slightly different rules regarding where and when weddings can occur, how many couples can get married in a day, how big the wedding gathering can be and how much permits cost. Couples must abide by environmental regulations that bar them from leaving anything behind: no rice, no butterflies, no petals. They must also follow the same rules as the general public and avoid closed areas. 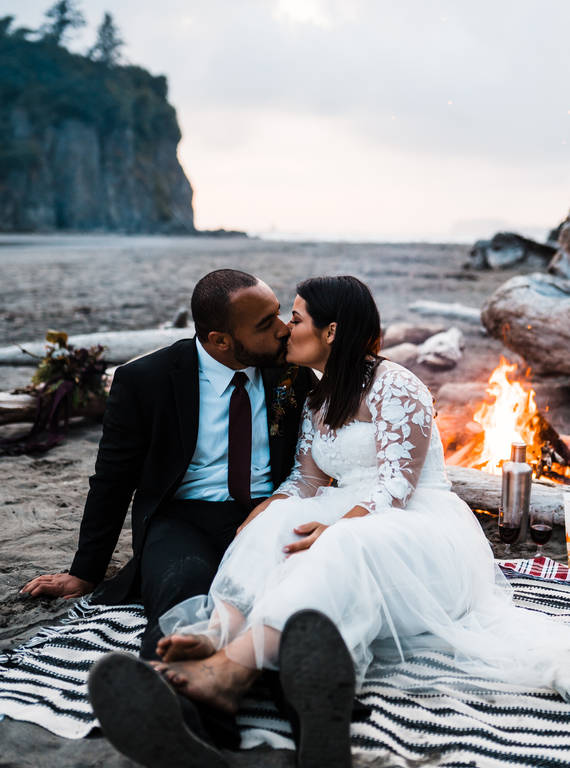 © Gabi and Brandon Fox of The Foxes Photography

Like many of their colleagues, Gabi and Brandon Fox started shooting adventure elopements because they love backpacking, climbing and sharing their love of the outdoors. They work to convey both a reverence for the wilderness and a sense of environmental stewardship to their clients.

“We have so many couples who come from Florida or the Midwest, and we bring them to the heart of the North Cascades, and they’ve never seen anything like this before,” said Gabi. “The couples are so blown away.”

For the past six years, the Foxes and their dog Aiko have divided their time between Tacoma, Washington, and a 1972 Airstream trailer, where they are currently living full time. In recent months, they photographed weddings in the redwood forests of Northern California, a Colorado ghost town and Zion National Park in Utah. But perhaps the area they know best is the mountains of the Pacific Northwest, where they have developed expertise in the terrain and weather.

One October, the Foxes were preparing to shoot an elopement amid fall foliage in North Cascades, when a surprise storm dumped 2 feet of snow. They welcomed the turn of events, pulling out winter garb and shooting beautiful photos in the snow. At another wedding at nearby Mount Baker, a storm rolled in just as the couple were about to exchange vows. The Foxes and the bride and groom grabbed their gear, hiked higher up the mountain and performed the ceremony in the golden light above the clouds.

“We tell every couple, there’s no such thing as bad weather, just bad gear,” said Gabi. “If it’s raining, we just go out into the rain and have a great time.”

Shannon and Todd Moser of Colorado were willing to risk inclement weather to have the intimate wedding they envisioned. The couple exchanged vows among the rocky red cliffs of Canyonlands National Park in Utah in 2019, accompanied by photographers Megan and Nate Kantor. “We wanted a wedding that spoke to us,” said Todd, 33, a surgical technician. He and Shannon, 29, spent their courtship hiking, backpacking and climbing in Colorado and Utah and had explored Canyonlands many times before. “We’re so outdoorsy that I don’t think getting married in four walls would make sense for us,” he said.

The Mosers started their wedding day with a hike, then nestled on an overlook, brewing coffee on a camping stove and watching the morning light play over the land. Later, in their wedding clothes and hiking shoes, they headed to the spot they had picked to exchange vows. A few friends and relatives walked half a mile to join them, including Shannon’s grandparents, who huddled against a cliff during the ceremony. Afterward, the couple and their friends went canyoneering.

For Shannon, one of the most meaningful keepsakes of the day is her dress. Like many adventure elopement brides, she did not send her gown to the cleaners after returning home, but hung it in the closet still streaked with red earth, a reminder of a profound day spent between ancient rocks and boundless sky.