The Unsung Heroines of Stonewall

More than half a century later, these bold women continue to inspire.

Stonewall National Monument is the only national park site specifically dedicated to the LGBTQ civil rights movement. It shares the struggle of hundreds of people who demonstrated in a six-night uprising against police discrimination and brutality in 1969. Among those who fought for acceptance and equality are Sylvia Rivera, Stormé DeLarverie and Marsha P. Johnson. Yet few know their names — and because the site doesn’t have a visitor center, park-goers can easily miss out on learning their stories.

Often, LGBTQ stories go untold. The idea of current and future generations losing access to these tales terrifies me.

I grew up in New York City, a city famous for its bustling LGBTQ community. And yet, my oddly sheltered upbringing included few openly LGB people and zero T people. I didn’t even know “trans” was something a person could be (let alone that I could be it!).

When I finally started piecing together my queer identity, I didn’t have much in the way of guidance or LGBTQ role models. So, I sought community in history. Reading the stories of figures like Johnson, Rivera and DeLarverie gave me a sense of community and much-needed perspective. People like me existed, they always have, and they always will — and many fought and died so that I could have an easier life. I owe it to them to remember and share their stories.

October is National LGBTQ History Month: a time to remember and celebrate some of the historic figures who don’t typically appear in classrooms and textbooks. Historians cannot confirm exactly how the Stonewall Uprising began, but we do know that Rivera, Johnson and DeLarverie were key players, and that their legacies are just as significant today as they were in 1969. 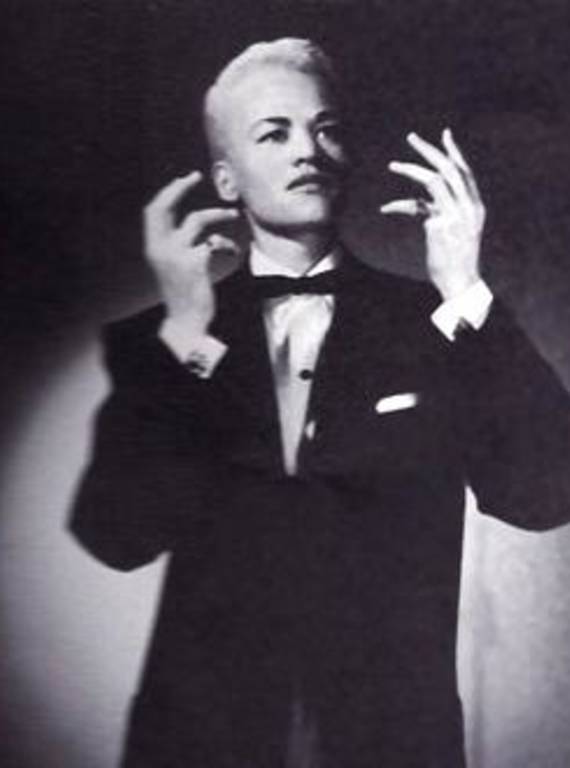 A promotional photo of Stormé DeLarverie when she was performing with the Jewel Box Revue.

Stormé DeLarverie was a butch lesbian with zero tolerance for discrimination, or as she called it, “ugliness.” She was born in New Orleans on Christmas Eve to a Black mother and white father. She had a beautiful baritone voice and discovered a love for jazz at a very early age. She started singing in New Orleans clubs at 15, and soon after began touring around Europe, eventually landing in New York City. She became the master of ceremonies for the Jewel Box Revue, a racially integrated variety show featuring 25 drag queens and DeLarverie as the lone drag king.

She gave up on abiding by that law, though she was occasionally detained for wearing men’s clothing too. During one arrest, a police officer criticized her bow-tying skills. She responded by asking for a tutorial. He complied, and in a 2001 interview, DeLarverie boasted that she could still tie a bowtie perfectly without a mirror. 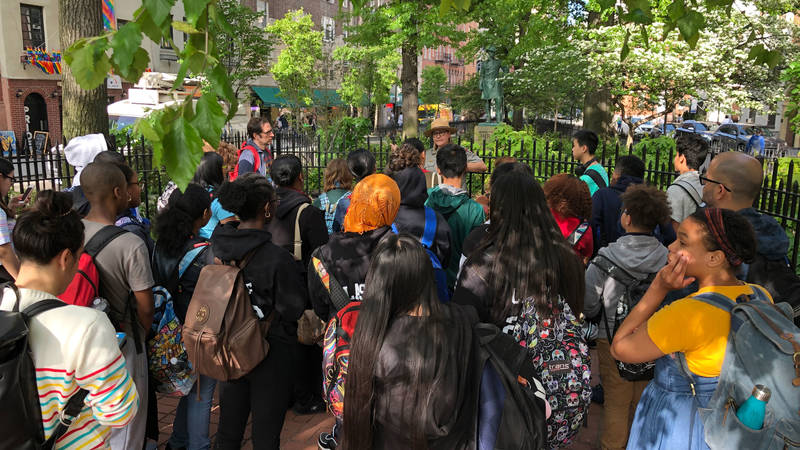 DeLarverie called herself the “guardian of the lesbians in The Village.” She patrolled the streets of Greenwich Village with a concealed rifle, making sure all the lesbians and the street kids were safe. If she saw any “ugliness,” she’d shut it down immediately. She continued doing her rounds every night, even as an octogenarian — recounting in a 2002 interview, “You don’t do [ugliness] around me. Just don’t try it. You’re apt to wind up with your ass on the floor.”

Some people believe that DeLarverie started the Stonewall Uprising. The story goes that a “mysterious butch lesbian” was being arrested for violating the three-piece clothing law, and she either yelled for the crowd to do something or punched an officer herself, which encouraged others to start fighting back. Some say that DeLarverie was this butch lesbian, and some say she wasn’t. She even went back and forth herself, and in her old age, preferred not to talk about the specifics. Whether or not she was this individual, her contributions to the LGBTQ community are undeniable. DeLarverie was an icon and an inspiration, both as a musician and as a staunch protector of anyone she considered family. During an era that often showed hostility towards LGBTQ people, and queer women in particular, DeLarverie provided safety and acceptance.

Sylvia Rivera was practically born with a megaphone in hand. She was assigned male at birth, which came with a lot of expectations about how boys should and should not dress. Rivera did not follow the rules society set for her — by age 9, she was already wearing makeup to school.

One day when Rivera was in 6th grade, she was on the playground in skintight pants and makeup. A much taller and stockier kid called her by a homophobic slur. Rivera pounced and beat him up. The principal called her into his office. After explaining what happened, she looked him in the eye and asked if she looked like someone who deserved to be called that derogatory term. He said no. Rivera was suspended for a week, and her bully for a month. Rivera made it clear that despite the acrid homophobia and transphobia present in 1960s America, she was not to be messed with. 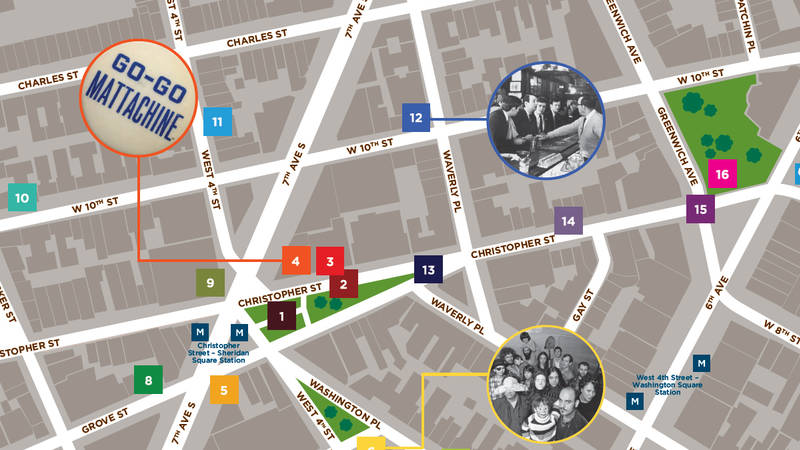 Download a map and enjoy the first formal walking tour at Stonewall National Monument. Learn more about the places in Greenwich Village that paved the way for the Stonewall Uprising…

Rivera was 17 years old during the Stonewall Uprising. She is sometimes credited with throwing the first Molotov cocktail at police, inspiring others to do the same. She debunked this myth in a 2001 speech, saying she threw not the first, but the second. She was an active participant all six nights, refusing to go home even to sleep, not wanting to miss a moment of the revolution.

Rivera’s life was full of intense hardships, activism and love for her trans sisters. Fierce until the very end, her legacy continues in countless ways, including through the Sylvia Rivera Law Project, which works to ensure “that all people are free to self-determine their gender identity and expression, regardless of income or race, and without facing harassment, discrimination, or violence.”

Marsha P. Johnson picketing outside Bellevue Hospital in New York City, circa late 1960s or early 1970s, to protest the treatment of LGBTQ and homeless people. Her sign reads, “POWER TO THE PEOPLE.”

Marsha P. Johnson grew up in Elizabeth, New Jersey, with her mother. She’s said that the town had zero tolerance for LGBTQ people — and as a woman assigned male at birth, she left as soon as she could. She graduated high school at 17, then fled to New York, where she could finally start dressing how she wanted. She worked both as a waitress and a sex worker. Choosing a name is a rite of passage for many transgender people, and she tried on a few before settling on Marsha P. Johnson. “Johnson” was inspired by a Howard Johnson restaurant she liked, and the “P” stood for “Pay it No Mind,” which is how she responded when questioned about her gender. 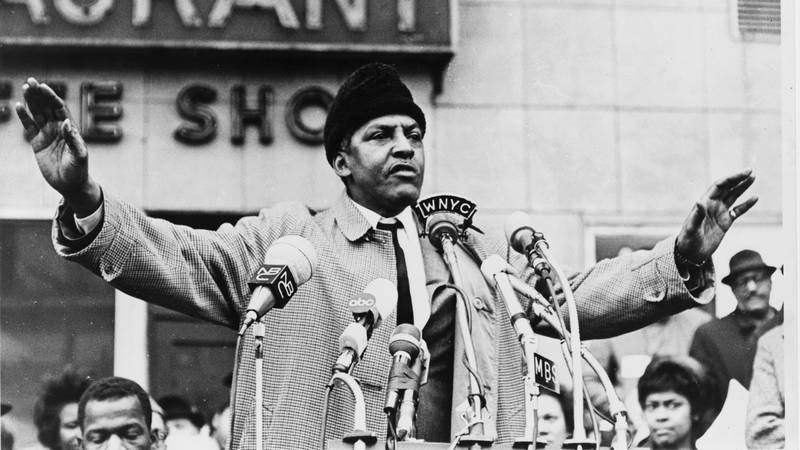 Johnson is often credited with throwing the first brick at Stonewall. In reality, she didn’t arrive at Stonewall until about 2 a.m., long after the uprising began. That night, she had invited a bunch of her friends, including Rivera, to a party. She waited and waited, but no one showed up. Finally, she decided she’d make her own fun and started checking out the local scene. When she got to Stonewall, she encountered shouting, fire and chaos. She was seen dropping a very heavy object on top of a police car, among other actions. Johnson said she wasn’t afraid of being arrested because she’d spent the last 10 years going to jail simply for wearing makeup on 42nd street. She had nothing to lose. While she may not have started the riots, she was a major player in the LGBTQ rights movement and community during the 60s, 70s and 80s.

Johnson would go on to create a trans rights group with Rivera called Street Transvestite Action Revolutionaries (STAR). They also maintained the STAR House, a place of refuge for LGBTQ homeless youth. Johnson was known for her immense generosity. She’d spend her meager earnings on meals for others and couldn’t walk downtown without multiple people calling her name, wishing her well. She was joyous and creative and enjoyed performing. She made intricate outfits out of garbage, modeled for Andy Warhol and wrote poetry. She was a Catholic with a strong sense of faith. Her work continues today through the Marsha P. Johnson Institute, which fights for the rights of Black transgender people.

As a nation, we are doing a better job of telling the stories of these historic figures and the countless people they worked alongside. NPCA and numerous partners and volunteers strongly advocated for Stonewall’s designation as a national monument in 2016. Earlier this year, New York Gov. Andrew Cuomo dedicated a seven-acre waterfront park in Brooklyn to Marsha P. Johnson, the first state park dedicated to an LGBTQ historic figure and a transgender woman of color. NPCA continues to advocate for a visitor center at or near Stonewall National Monument where the public can learn more about DeLarverie, Rivera, Johnson and others like them.

In high school, I used to sit in Christopher Park, imagining what it would be like to have LGBTQ friends. Now, whenever I pass by Stonewall National Monument, I can’t help but smile, thinking about how much has changed. I’ve found my own queer chosen family, and the government officially recognizes this little gated triangle of life, loss and zeal as a place full of stories worth protecting and telling. Through my role at NPCA, I even get to help middle and high school students learn about the site.

Yet, there is still so much work to be done. Johnson and Rivera struggled with housing security up until their deaths. It is likely that Johnson’s death was one of the many murders that trans women, especially women of color, are disproportionately victims of every year. Racism, homophobia and transphobia still disenfranchise countless Americans today, and we must pick up the torch that DeLarverie, Johnson and Rivera left behind.