A proposed mining road would cut through national park land critical to one of the longest land migrations on Earth and harm communities that depend on Arctic caribou for food.

Caribou cross the Kobuk River at Kobuk Valley National Park twice each year — north every spring and south every fall (as seen here).

In the wide-open lands of northwest Alaska, wildlife moves freely across the landscape as it has for thousands of years. The Western Arctic Caribou Herd is the epitome of this kind of boundless migration. Each year, 250,000 caribou migrate across a 100-million-acre landscape, the size of the state of Montana.

A life-long resident of Alaska worries a road would destroy the wilderness he knows and loves.

As they wander from their calving grounds in the Utukok Uplands to their wintering grounds on the Bering Land Bridge and back again, western Arctic caribou can cover 2,700 miles a year, equivalent to the distance between New York and Seattle — one of the longest land migrations on Earth.

While most other herds across the North American arctic have sharply declined in numbers, the Western Arctic Caribou Herd is currently stable. Since the mid-1990s, total Arctic caribou populations have dropped by 56%, from 4.7 million to 2.1 million. This means that the Western Arctic Caribou Herd alone accounts for 12% of all Arctic caribou remaining in North America.

A lone caribou from the Western Arctic Caribou Herd at Gates of the Arctic National Park and Preserve. 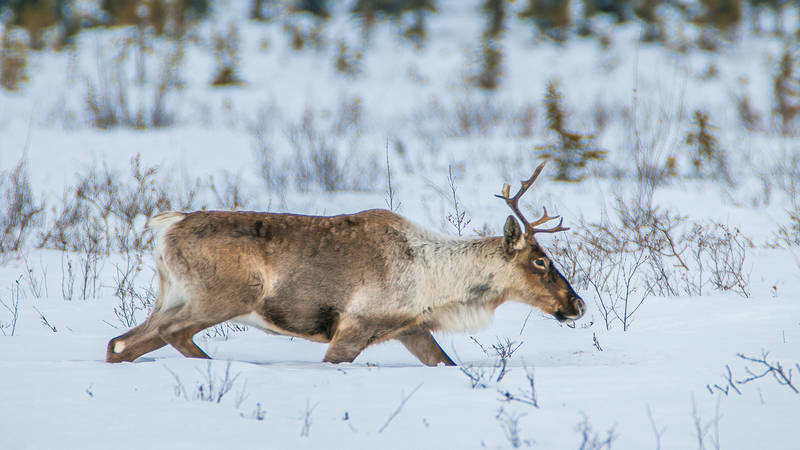 Learn more about NPCA’s work to protect caribou from the Ambler Access Road and mining district.

Despite the Arctic caribou’s stable population, the future of the herd is uncertain. Federal law mandates that the National Park System permit a mining access road across Gates of the Arctic National Preserve lands. This road, known to some as the Ambler Access Road and to local opponents as the “Road to Ruin,” would create a 210-mile east-west route across the tundra of the southern Brooks Range, cutting directly through the eastern third of the Western Arctic Caribou Herd’s migration corridor.

This road is not a foregone conclusion, however. The Bureau of Land Management is currently conducting an environmental impact statement on the regional impacts of the road across many different state and federal lands. NPCA is actively engaging in this public process on behalf of our 1.3 million members and supporters.

A recent study indicates that roads directly impact caribou migration behavior, and there is serious concern that the road would significantly shift the Western Arctic Caribou Herd farther west, away from Alaska Native villages that depend on the animals for food.

Conservationist and long-distance explorer Kristin Gates completed a 350-mile packraft expedition through the entire Brooks Range in 2016 and has since become an advocate for protecting the region from this destructive road. NPCA is partnering with Gates to post a series of videos from her and her team this summer, including footage of the majestic caribou herd and how it could be affected by the development.

“The Arctic is such important habitat for multiple caribou herds,” Gates told NPCA earlier this month. “Right now, caribou herds across the circumpolar north are declining. Entire herds are disappearing. Wildlife biologists agree that it’s due to development. … It’s a fragile habitat, and it really does need to be protected.”

A group of caribou from the Western Arctic Caribou Herd get ready to swim across the Noatak River, heading south on their fall migration.

NPCA will continue to lead efforts to stop the road and associated mining district proposed within the range of the Western Arctic Caribou Herd. We will be providing the opportunity to submit comments during the public comment period later this summer in support of caribou and the people who depend on them.

Learn more about this “billion-dollar driveway” and read our FAQ with other problematic details about the inappropriate project.