On a desert hike, a father and his teenage daughter contemplate canyons, cliffs and the heartache that comes with growing up.

“I coaxed, cajoled, even stooped to doughnut bribery.” — A father’s perspective

When my daughter, Hannah, was an infant, I wheeled her all over the high desert wilderness near our home in a stroller I had customized with tires studded for snow and mud and slimed for protection from desert peach thorns. As she grew, I hiked and snowshoed her around the wild Great Basin hills and canyons in a backpack. As soon as Hannah could walk, we began logging the miles together, often hand in hand, observing pronghorn in flight, identifying wildflowers and picking up gopher snakes to feel the cool smoothness of their scutes as they writhed around our wrists. But Hannah is 14 now, and hiking with me is no longer her top priority.

The trouble started on the third day of our springtime trip to Death Valley National Park, which is to say the third consecutive morning on which I had insisted that my family rise at daybreak to join me on a long, hard hike in the sublime barrenness of the park. For the day’s adventure, I had chosen Black Point, a route that has a long, exposed approach and no marked trail. The hike, which looked remote and difficult to navigate, didn’t appear in our trail guide, though I had found some sketchy information about it online. It sounded perfect.

Anyone who has tried to wake a teenager before sunrise will have a sense of how my day began. Hannah didn’t want to leave her bed to join my hike, even as I explained with grown-up logic the importance of an early start in a place as blisteringly hot as Death Valley. She remained unimpressed. I coaxed, cajoled, even stooped to doughnut bribery. When at last Hannah became vertical, her painstaking bathroom ritual began, suggesting that she harbored a special concern about what the chuckwallas might think of the swoopy thing she was doing with her hair. When Henry David Thoreau wrote in “Walden” that “the man who goes alone can start today; but he who travels with another must wait till that other is ready,” he failed to specify how long the man who goes with a teenager might have to sit tight. 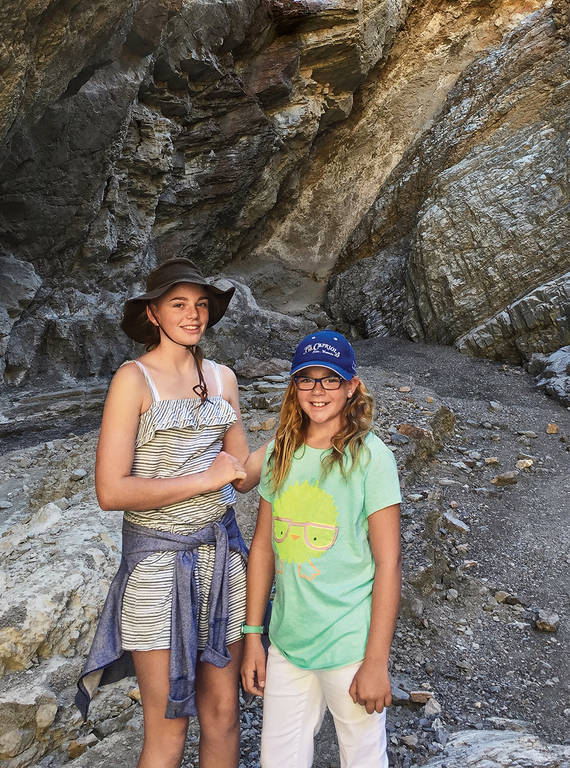 Hannah Branch , (left) and her sister, Caroline, in Death Valley. The family’s hike along a remote and little used route got off to a bumpy start — but then something changed.

At last I succeeded in herding Hannah to the pickup, after which I subjected her, along with her little sister, Caroline, and my wife, Eryn, to a long, tense drive followed by a great deal of uncertainty in locating the trailhead. Once we were parked, more delays followed, as Hannah began for the first time to consider what she might need on the hike. While she appeared unconcerned with trivialities like water or sunscreen, she made sure to bring her phone, which I regarded as a positive hindrance to a decent hike. Meanwhile, I fumed silently, wishing I could slow the rising of the sun.

Until age 13, Hannah had been the most congenial and eager hiking partner I’d ever had. Now, seemingly overnight, she had become sullen and crabby, behaving as if being chauffeured to one of the West’s most spectacular landscapes was an unthinkable punishment. The first 2 or 3 miles of the hike only made matters worse as the broad canyon steepened and it became uncomfortably warm. No other humans were in sight, there was little prospect for shade, and the hike, which was not at all picturesque, even passed by an ancient trash dump. Hannah remained silent throughout, except to note archly that this arduous trek bore no resemblance to the sinuous vermilion slot canyons gracing the cover of our Death Valley trail guide.

As we slogged up the sandy wash toward the distant peak of Tucki Mountain, the surrounding landscape began to change dramatically. The canyon narrowed and deepened, and the ridges above us fractured into delicate fins. Another half-mile, and the Shiprock formation, an ocean liner in both size and shape, loomed over the canyon. I sensed that Hannah was as impressed as I was, though she trooped along without saying much. Soon the canyon constricted into a series of boulder-strewn chutes graced by numerous dry waterfalls, where light cascaded down the luminous face of smooth rock.

Hannah brightened as we encountered this series of gorgeous pour-overs, running ahead to climb one of the polished waterfalls. She scrambled up eagerly — she clearly didn’t need the belay rope I’d carried in my daypack — and encouraged the rest of the family to join her on her perch atop the rock face. Her brooding silence had been replaced by laughter, which echoed from the canyon walls, redeeming the day.

And then something even more remarkable happened. Hannah took out her phone and began attentively photographing everything around her: the patina-streaked chute of the gleaming pour-over, the curved face of an alabaster boulder, the crimson halo of a cottontop barrel cactus. She was suddenly alert, content, fully engaged with her natural surroundings. Without my help, or perhaps despite it, Hannah had found her own way into this hike. As I sat quietly, watching my lovely daughter gather images of the canyon, it occurred to me that I didn’t comprehend her afternoon blossoming any more than I had understood her morning dormancy.

Hannah would later tell me that Black Point was one of the best hikes of her life. I still do not understand why. But, ready or not, I am the father of a 14-year-old. After sharing Death Valley with a teenager, I’m beginning to suspect that in parenting, as in nature, it may be best to stop looking for an explanation and simply embrace the mystery.

“I didn’t know what was wrong.” — A teenager’s view

I’ve been experiencing nature with my dad for as long as I can remember. While other parents and their daughters watched Disney princess movies, my father and I watched golden eagles circle the sky. I got my first bee sting while working with him in the garden. After a quick cry and a Cookie Monster Band-Aid, we left for a walk. My dad taught me that there aren’t many things a walk in the wilderness won’t fix. It wasn’t until we traveled to Death Valley that this principle came into question.

If I acted like a grizzly bear that had been awakened and dragged out of a cave that morning, it was because that’s how I felt. Maybe I was tired or frustrated with the early hour of the outing; maybe I missed my friends; maybe I was upset because I’m germ-phobic and hate sharing everything with everybody in hotel rooms; maybe I was low on protein because I didn’t eat my yogurt; maybe I just hate being told what to do. A minute inside my head would be enough to make anyone grumpy. I rarely know what’s going on up there.

The first 2 miles of the hike didn’t look like a trail. I was hot and uncomfortable, and I hadn’t put on sunscreen, worn a hat or brought enough water, despite the fact that my dad told me to do all of these things. My dad also told me not to bring my phone, but I wanted to make my own decisions. I ignored him and threw it in my backpack. There was no shade, and I panted as I followed my family up the canyon into a mess of beige everything: dirt and rock and dead-looking plants, mostly. I figured I would be asked, “What’s wrong?” but I didn’t know what was wrong, so I walked a few steps behind, hoping to avoid conversation.

Those first few miles felt like a few hundred in the heat. We finally reached a shady area with rock pour-overs. I ran ahead and scrambled up one of the dry waterfalls to eat the sandwiches my mom had packed. Feeling the cool rock against my skin, I realized that just as nature had hurt me on the hike up, it was healing me once again. A light breeze rippled my shirt. I listened to my parents talk quietly as they approached. Suddenly, I was out of the sun and off the ground, and I didn’t feel trapped or confused anymore. Soon we were laughing. My dad climbed into the alcove and shared his water. I grabbed some sunscreen from his backpack, feeling better about it since it was my choice instead of someone else’s order. Looking out over the canyon, I realized that it was all pretty stunning. I took a million pictures because I wanted to remember everything. I’ll never be sure exactly what changed in me, but something did.

My dad often says, in one way or another, that he misses that wide-eyed girl who used to walk with him every day. I miss her too, Dad. I don’t know where she went, but I know, deep down, that we won’t ever get that girl back. I’m changing so fast that even I can’t keep up. But this also means I can grow out of the bad phases as quickly as I fall into them.

This article appeared in the Summer 2018 issue