NPCA's staff and partners were appalled to learn of the conditions inside Big Cypress.

NPCA regularly supports the National Park Service and its core mission to protect our nation’s most iconic and inspirational places. But when the agency recently approved plans to allow extensive…

Surprising as this may sound, the mineral rights at this national preserve are privately owned through an uncommon management arrangement, allowing the possibility of oil and gas development. NPCA strongly opposed the way the company proposed conducting the exploration, however, knowing that these massive survey trucks could severely damage the wetland preserve.

The oil company, Texas-based Burnett Oil, promised it would take mitigation measures to protect the park, and the National Park Service approved the plan. NPCA didn’t believe the mitigation measures would suffice, however, and sued the Park Service for not doing its job — protecting these magnificent wetlands, which are essential to the health of the larger Everglades region.

NPCA’s staff and partners were appalled to learn of the conditions inside Big Cypress.

Video from one of the survey trucks shows the oil company plowing over mature cypress trees in the preserve.

Killing a large tree with airplants

Operators stop at a large cypress with bromeliads (flowering plants) at the top. Instead of rerouting, they drive over the tree.

Leaving deep ruts in the soil

Video from the rear of one of the trucks shows deep rutting in the wetlands. Consultants verified that these ruts such as these were not repaired, leaving the preserve vulnerable to invasive species and other problems.

The videos show oil company trucks plowing over trees in the preserve. These videos were hard to watch — especially knowing that the Park Service permitted the damage. The videos show hundreds of dwarf cypress trees – some adorned with cardinal airplants, flowering plants that are endangered in the state – being snapped and crushed under the trucks as they carve trails through the roadless wilderness. 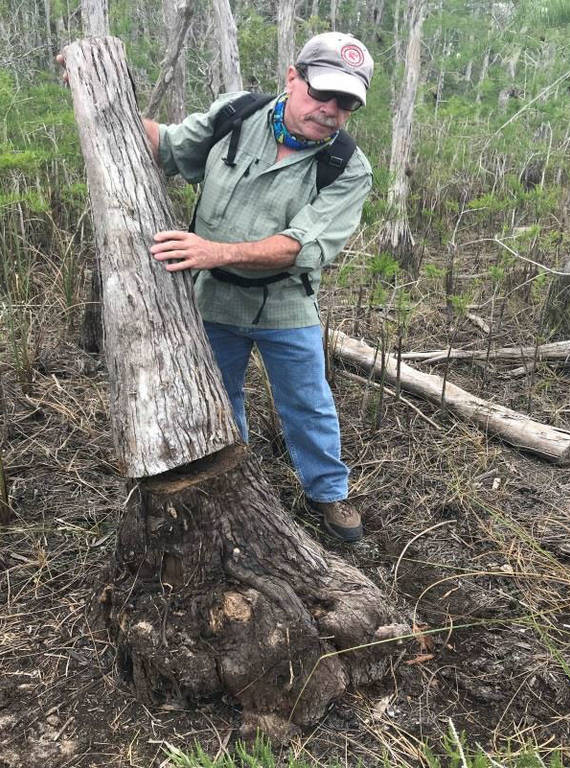 A consultant reassembles a cypress tree estimated to have been 330 years old. The stump measured 40 inches and the trunk was approximately 6.1 inches at breast height, significantly larger than specimens the survey company had agreed to avoid killing. (Taken April 2018.)

Though thin and short, most of the trees are fully mature — that’s how they grow in the swamp. Occasionally a video will show the truck stopping before a tree bigger than 4 inches diameter at breast height — the size at which the permit requires the company to leave trees standing, if possible. Sometimes the workers find a path, other times they cannot, and the tree is either chainsawed or pushed down, despite requirements that such larger trees “shall be avoided.”

The oil company and the Park Service also promised that their activities would avoid or minimize rutting, and that any ruts, depressions and vehicle tracks would be repaired to their original condition. This did not happen. The videos show areas of deep rutting, appearing to be about thigh-high on one of the workers walking behind the truck. These kinds of ruts can be severely detrimental to the hydrology of the park and can serve as pathways for off-road vehicles and invasive species.

After watching these videos, NPCA, the Natural Resources Defense Council and the Conservancy of Southwest Florida sent environmental consultants into the field in April 2018 to see whether any damage was still visible after the wet winter. The oil company’s permit had required that it would work continuously to restore the damage it created as part of the survey process, and that the company would remove ruts from the soils to match the original conditions and revegetate disturbed areas, among other provisions.

Instead, the consultants documented “extensive” damage. They observed rutting up to 22 inches deep in certain areas with no visible attempts to restore the soils. Very little vegetation was regrowing. Stumps and broken trees littered the trails. One dwarf cypress stump measured 40 inches in diameter from a tree estimated at more than 330 years old. Other chainsawed trees were able to be reassembled and were greater than 4 inches at breast height.

In all, consultants observed violations of at least six of the mitigation measures required in the Park Service permit.

The revelation of this damage was a depressing vindication for NPCA and our partners, who recognized the likelihood of these impacts and the inadequacy of the mitigation measures years ago. Burnett Oil pledged to begin mitigation work in the preserve in early May, though we don’t know what, if anything, the company has done. Burnett Oil is working with the Park Service on a plan to restore the identified damages, though many questions remain about what that plan will look like and how much can be done to fix the damage before the preserve again becomes too wet to work in. May 2018 was the rainiest May in the recorded history of Big Cypress.

The threats did not stop in 2017. Burnett conducted additional testing in another part of the preserve in early 2018, and the wet weather has already forced them to stop for the year. What the impacts of this years’ testing may have been — and whether they were mitigated or restored — we don’t yet know.

NPCA and our partners will continue to work to expose the ongoing damage in the preserve and ensure its remediation and restoration using all options available to us. It is not too late for Burnett Oil to repair the damage, and NPCA is committed to working with the company and the Park Service to protect Big Cypress and its incredible wildlife.