The celebration will focus on people whose stories are told in our parks – and the people who protect those places.

WASHINGTON – At its 37th annual Salute to the Parks celebration, National Parks Conservation Association (NPCA) will honor two influential women and park champions: former Interior Secretary Sally Jewell and Park Service Ranger Betty Soskin. The celebration will focus on people whose stories are told in our parks – and the people who protect those places. The evening reception will be held at the National Museum of Women in the Arts in Washington, D.C. on April 11, 2018.

The Honorable Sally Jewell, Interior Secretary under President Obama, will receive the William Penn Mott Jr. Park Leadership Award, as a public official demonstrating an outstanding commitment to the protection of America’s natural and cultural heritage. As Interior Secretary, Jewell oversaw our national parks and all public lands, waters, wildlife, science and upheld the rights of Native Americans. Prior to becoming Interior Secretary, she served as a member of the National Parks Second Century Commission, leading efforts to better connect people to parks, reach diverse communities and built a broad-based network of park and outdoor recreation advocates. As a former member of NPCA’s Board of Trustees, including serving as Vice Chair, Jewell’s business savvy and passion for conservation was a tremendous asset to NPCA’s park protection work. 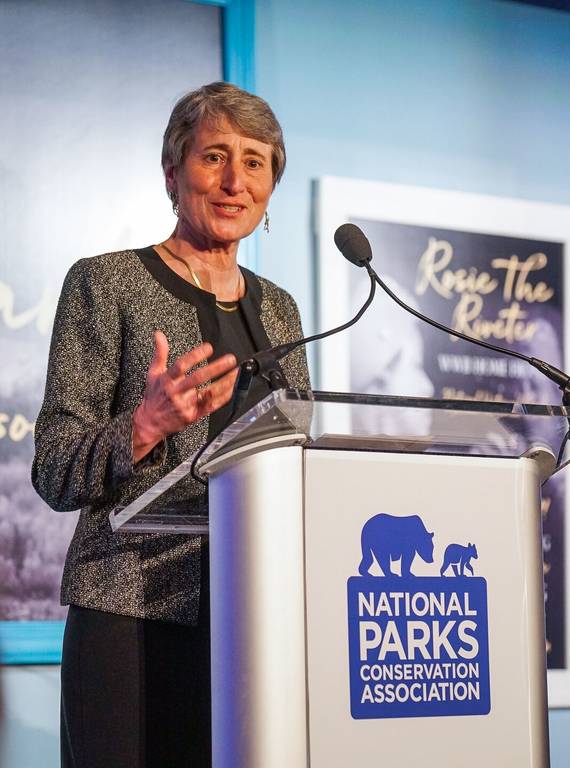 “Sally has true passion for our public lands, from her tireless advocacy for conserving important places to better engaging young people with the outdoors,” said Theresa Pierno, President and CEO for National Parks Conservation Association. “Under her leadership, many new national park sites were established that help better tell our shared American story and the diverse people represented in our parks. From the first national park site dedicated to LGBT history at Stonewall National Monument in New York City, to honoring the struggle for women’s rights at Belmont-Paul Women’s Equality National Monument here in D.C., to acting on a proposal from five tribes in the Southwest and designating Bears Ears National Monument, Sally has left a lasting impact on our national parks that will last for generations.”

“NPCA’s advocacy over the course of its 99 year history has assured that the incredible value our National Parks bring to the public is understood across the political spectrum”, said Sally Jewell. “I’m honored to receive the Mott Award, and look forward to continuing to advocate for our parks, ensuring that all Americans, especially young people who represent the rich diversity that makes our nation great, can experience these special places that honor our complex history, rich cultures and extraordinary natural wonders.”

National Park Service Ranger Betty Reid Soskin will receive the prestigious Robin W. Winks Award for enhancing public understanding of national parks. The award is given annually to an individual or organization that has effectively communicated the values of the National Park System to the American public.

Through Soskin’s dedication to the creation of and storytelling at the Rosie the Riveter/World War II Home Front National Historical Park, park visitors and future generations gain a better understanding of the park’s history and the important contributions of women of color in the war effort, helping to ensure this history is preserved for generations to come.

“Betty is an extraordinary woman, a trailblazer for equal rights and has dedicated her lifetime to ensuring the story of African Americans and women throughout our nation’s history is told,” said Pierno. “From her influential role at Rosie the Riveter/World War II Home Front National Historical Park in California, Betty has inspired not only national park visitors but Americans far and wide with her personal stories of struggle and empowerment.”

“Though surely not the original intent of the National Park Service, nor probably even considered by the park’s creators, I find that it is now possible to visit almost any era in our nation’s colorful history, the heroic places, the contemplative places, the scenic wonders, the shameful places, and the painful places – to own that history, to process it, in order to begin to forgive ourselves that we may then move together toward a more compassionate future,” said Betty Reid Soskin. “To have been able to participate in that process is both an honor and a privilege unimagined in my lifetime.”

National Parks Conservation Association’s annual Salute to the Parks awards reception offers one of the largest and most influential gatherings of the conservation and environmental communities. This annual event celebrates our national parks and the people around the country who speak up on their behalf.

About National Parks Conservation Association: Since 1919, the nonpartisan National Parks Conservation Association has been the leading voice in safeguarding our national parks. NPCA and its 1.3 million members and supporters work together to protect and preserve our nation’s most iconic and inspirational places for future generations. For more information, visit www.npca.org.