How would a border wall affect national parks?

The national debate about border security doesn’t often dwell on the natural environment, but hundreds of miles of public lands, including six national parks, sit along the U.S.-Mexico border. What will happen to these lands — and the wildlife and plants they protect — if a wall or additional fences and barriers are built along the frontier? 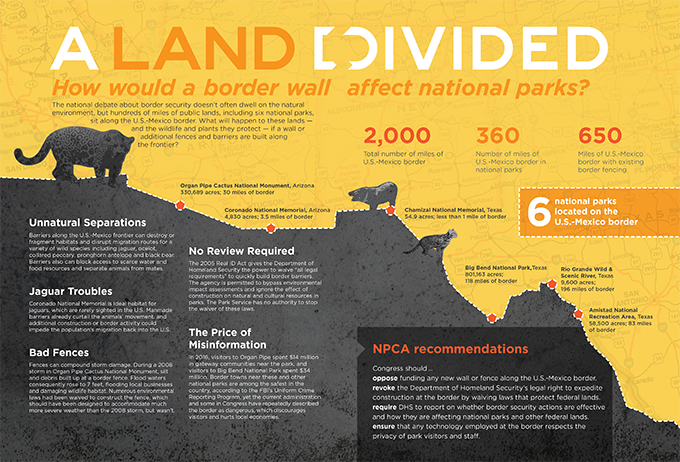 Barriers along the U.S.-Mexico frontier can destroy or fragment habitats and disrupt migration routes for a variety of wild species including jaguar, ocelot, collared peccary, pronghorn antelope and black bear. Barriers also can block access to scarce water and food resources and separate animals from mates.

oppose funding any new wall or fence along the U.S.-Mexico border.

revoke the Department of Homeland Security’s legal right to expedite construction at the border by waiving laws that protect federal lands.

require DHS to report on whether border security actions are effective and how they are affecting national parks and other federal lands.

ensure that any technology employed at the border respects the privacy of park visitors and staff.

Coronado National Memorial is ideal habitat for jaguars, which are rarely sighted in the U.S. Manmade barriers already curtail the animals’ movement, and additional construction or border activity could impede the population’s migration back into the U.S.

Fences can compound storm damage. During a 2008 storm in Organ Pipe Cactus National Monument, silt and debris built up at a border fence. Flood waters consequently rose to 7 feet, flooding local businesses and damaging wildlife habitat. Numerous environmental laws had been waived to construct the fence, which should have been designed to accommodate much more severe weather than the 2008 storm, but wasn’t.

The 2005 Real ID Act gives the Department of Homeland Security the power to waive “all legal requirements” to quickly build border barriers. The agency is permitted to bypass environmental impact statements and ignore the effect of construction on natural and cultural resources in parks. The Park Service has no authority to stop the waiver of these laws.

The Price of Misinformation

In 2016, visitors to Organ Pipe spent $14 million in gateway communities near the park, and visitors to Big Bend National Park spent $34 million. Border towns near these and other national parks are among the safest in the country, according to the FBI’s Uniform Crime Reporting Program, yet the current administration and some in Congress have repeatedly described the border as dangerous, which discourages visitors and hurts local economies.