The Japanese invaded this Alaskan island during WWII and sent the residents to Japan. Half died there; none ever returned home.

June 7, 1942, was a Sunday, and 6-year-old Nick Golodoff, like most residents of Attu, the most remote of a long chain of Alaskan islands, was walking back from church.

That’s when he heard what sounded like motors rattling in a nearby bay. Then a plane with a red circle on the wing flew so close he could see the pilot.

Twenty-nine-year-old Alex Prossoff, a family friend, started running, so Nick followed him. They heard voices they didn’t understand. Suddenly, they saw Japanese soldiers running down the hill toward them. Nick saw a glob of mud fly up in front of him, so he stopped. He turned around and saw mud splashing behind him, too. 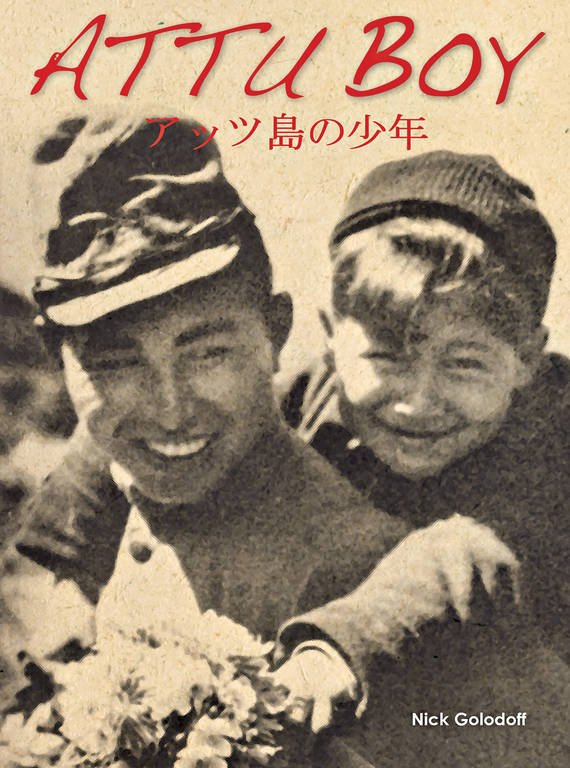 In “Attu Boy,” Nick Golodoff (the boy pictured on the cover) wrote about his experience during World War II.

“I did not understand the mud popping up at the time, but now I understand that the Japanese were shooting at us,” Nick said in an account published decades later. “Alex and I were lucky to get away.”

As waves of gunfire rained down, Prossoff hid under his wooden house with his wife, and Nick found refuge in a sod house close by. In the confusion, Japanese soldiers shot one Attu woman in the leg and accidentally killed one or two of their own. Soon, three dozen Attu residents — nearly the whole population of this Aleutian island — were rounded up and held in the village’s small school. A handful of men took to the hills, but eventually, Attu elders convinced them that resistance was futile, and they returned, too. The Japanese said that Foster Jones, one of Attu’s two white residents and the island’s radio operator, killed himself by cutting his wrists, but that was untrue. When his body was exhumed six years later, it was determined that he had been shot in the head.

For the next three months, Japanese and Attuans cohabitated on the island. The soldiers occupied the Russian Orthodox church and broke the church’s cross, but they let the residents move around, and several soldiers befriended local children. Then one day, the Japanese told Attuans to gather food and furniture in preparation for a move to Japan. They were taken to Otaru, a city northwest of Sapporo on Japan’s Hokkaido Island. Only about half would survive the exile, and no Attuans would ever live again on the island Aleuts had inhabited for thousands of years.

Attu is considered North America’s westernmost tip because it is the last American island of the Aleutian Arc that extends westward from the Alaska Peninsula. However, because it is on the other side of the 180th meridian that separates the Eastern and Western Hemispheres, it is also one of America’s easternmost islands.

After joining the National Park Service in 2000, Rachel Mason began researching the history of Attu and other Aleutian villages that were evacuated during World War II and never resettled. (Attu Island is included in the Alaska Maritime National Wildlife Refuge, and the Attu battlefield is part of the World War II Valor in the Pacific National Monument.) Her research led her to Nick’s granddaughter, Brenda Maly, a young woman who was looking for a publisher for her grandfather’s memoir. Nick had devoured books about World War II, but he had found almost no mention of his island. “He just wanted Attu remembered,” Maly said.

Mason helped Maly and Nick finish “Attu Boy,” which was published by the Park Service in 2012. That October, surviving Attu residents and descendants met in Anchorage for a reunion. Most descendants knew little about Attu, so they congregated around Nick with family photos and questions. He signed copies of his book. “He was welcomed like a rock star,” Mason said.

It’s not surprising that many Attu survivors were reluctant to share painful war memories with their children and grandchildren. After a two-week trip in the cargo hold of a merchant ship, many of the Attuans arrived in Otaru suffering from tuberculosis. When the dried fish and other provisions the prisoners had brought were gone, they ate little besides white rice and a mysterious “grass soup”; several died from beriberi, a disease associated with malnutrition. The village chief and his son died from food poisoning after eating rotten food they found in a garbage can. In total, 21 Attuans died in Japan, including four of five babies who were born there. One woman was deprived of food and water for three days and forced to shovel snow barefoot after she blamed the Japanese for the death of her infant daughter.

While the Aleuts were held in Japan, U.S. forces waged a fierce campaign to reclaim their island. After a two-week battle in the bitterly cold Attu spring of 1943, a weakened Japanese force launched a daring attack that culminated in bloody hand-to-hand combat. The Americans, superior in numbers, prevailed, and most of the Japanese who didn’t perish in battle committed suicide. By the time hostilities ended on May 30, 1943, 2,351 of 2,379 Japanese soldiers had died. The Americans had lost 549 soldiers out of a total of 12,500.

The Attuans knew nothing of the battle that had raged over their island until Americans came to rescue them when the war ended. After a three-month journey by plane, boat and train, the former captives arrived in Seattle. Some were treated for tuberculosis in nearby Tacoma, and Nick and 15 others returned to the Aleutians by boat. They resettled in Atka, a village on an island 500 miles from Attu. Their own village had been destroyed in the U.S. bombing campaign, and they were told they couldn’t go back.

Many, including Nick, would live the rest of their lives in Atka. He died less than four months after that 2012 reunion and is buried there. His younger siblings, Greg and Elizabeth, now in their late 70s, are the only Attu survivors left.

This summer, Mason and 11 descendants of Attu villagers boarded a research vessel in Atka, and after three days at sea, they set foot on the deserted island for the first time. They gathered grass to make traditional Attu baskets and explored the site where the village had stood. The faint outline of the church’s foundation was visible, but nothing remained of the houses or the cemetery. The small group held a Russian Orthodox service with holy water from Atka and planted a wooden cross that will likely not last long in Attu’s harsh weather. Soon the day came to an end, and it was time to go. So they packed their bundles of grass and bid farewell to Attu and its ghosts.