Goodbye to Happy, a four-legged park volunteer who lived up to his name until the end.

Whoever picked Happy’s name chose well. Best known for offering comfort to visitors to Flight 93 National Memorial in Pennsylvania, Happy maintained his sunny disposition during a stay in a shelter, when he underwent hip replacement surgery, and even during a battle with abdominal cancer that he ultimately lost. He died in August at around age 12, and lived up to his name until the end.

Happy’s professional career of comforting began in 2012. Well aware that happiness is a rare gift, Happy’s owners, Marsha and Tom Dulz, thought it would make good sense for their rescue dog to share his sloppy kisses and boundless love with those who needed it most. Over the course of nearly four years, Happy made the three-and-a-half hour round trip to Flight 93 National Memorial 76 times. 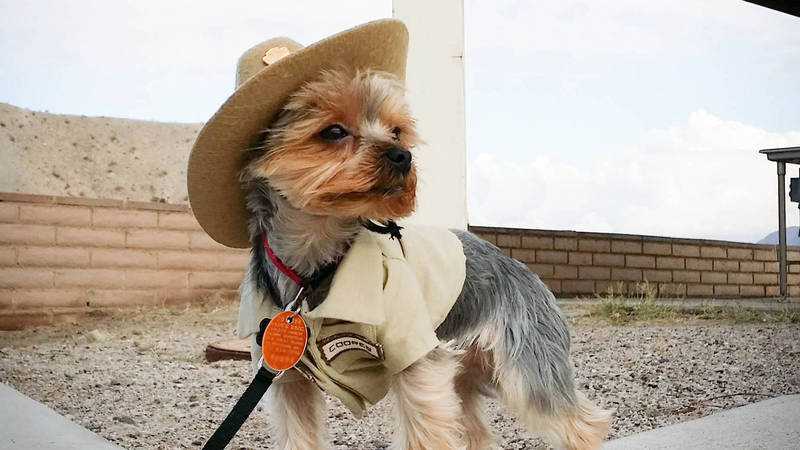 Working Like a Dog: See How Pups Help Park Rangers in These 12 Unusual Jobs

From sniffing out turtle eggs to keeping mountain goats out of parking lots, four-legged rangers carry out many duties that help preserve national park resources and make sure visitors have…

The memorial, located at the site of the Sept. 11, 2001, crash of United Airlines Flight 93, honors the plane’s 40 passengers and crew members, many of whom fought hijackers to regain control of the aircraft and prevent it from reaching its intended target. No one survived the crash.

Each year, hundreds of thousands of people visit the memorial, and many are overwhelmed with sadness or anger. The visit brings back harrowing memories of that day’s events and prompts visitors to question whether they would have had the courage to stand up to terrorists the way the Flight 93 passengers did. “There is a self-examination that takes place at Flight 93, and many visitors are not prepared for that,” said Kathie Shaffer, a longtime volunteer at the park. Some visitors ask volunteers for hugs, but many don’t know what to do with the emotions the visit can trigger.

That’s where Happy came in. Waiting at a respectful distance from the Wall of Names honoring each of the crash’s 40 victims, Happy would intuitively sense what visitors needed, whether it was just a tail wag or a more hands-on experience. “They could sit on the bench and pet the dog,” said MaryJane Hartman, the park’s chief of interpretation and visitor services. “They found it very therapeutic.” Happy was particularly helpful to parents unsure about how to answer their children’s questions about the September 11 attacks. He would entertain the little ones while easing the grown-ups into what could be difficult conversations. “It relieves the tension,” Shaffer said. “When you’re standing there petting the dog, you can talk about the bad guys.”

Happy welcomed the attention of all but showed special respect to veterans. He would stand up every time one walked by in uniform. He also always greeted visitors in wheelchairs first, Marsha Dulz said.

Little is known about the first five or six years of Happy’s life or how he ended up in a rescue shelter. “You don’t get to ask many questions,” said Donna Thompson, a family friend of the Dulzes. Thompson learned of Happy’s predicament and put Marsha Dulz in touch with the shelter. At that point, Happy was walking on three legs because of a bad hip — he would later earn the nickname “tripod” from the Dulzes’ grandchildren. Marsha Dulz took him in and later brought him to a veterinary surgeon who replaced both his hips.

Once Happy was up and running, the Dulzes decided it was time to share the love, so they began training him to be a therapy dog. To pass the certification test, therapy dogs must resist the temptation to eat food or grab objects lying nearby, walk safely around people on crutches, remain impervious to startling noises and, of course, be amenable to plenty of petting. “It’s a pretty stringent test,” Thompson said. Happy aced it.

Outside of working hours, Happy embraced his competitive side: He spent much of his spare time chasing prizes in so-called nose work contests. Happy would race to find birch- or anise-scented cotton swabs hidden in boxes, vehicles or other locations. He received the Harry Award, which recognizes rescued dogs that display extraordinary ability and spirit in nose work. “For the quiet, soft Happy, this was his alter ego,” Marsha Dulz said.

Though Happy retired from his volunteer duties at Flight 93 in September 2015, he continued to visit patients at a local nursing home until 10 days before his death. Those who knew Happy miss him dearly, but they take solace in knowing that he touched so many lives. “He was very, very gentle,” Hartman said. “He really opened doors that wouldn’t have opened otherwise.”

Secrets of the Seabirds