Restaurants just outside national parks can be destinations in their own right. Our staff recommends 10 eateries where you can enjoy local delicacies.

Note that several of these restaurants close during the winter and reopen at various dates in the spring. 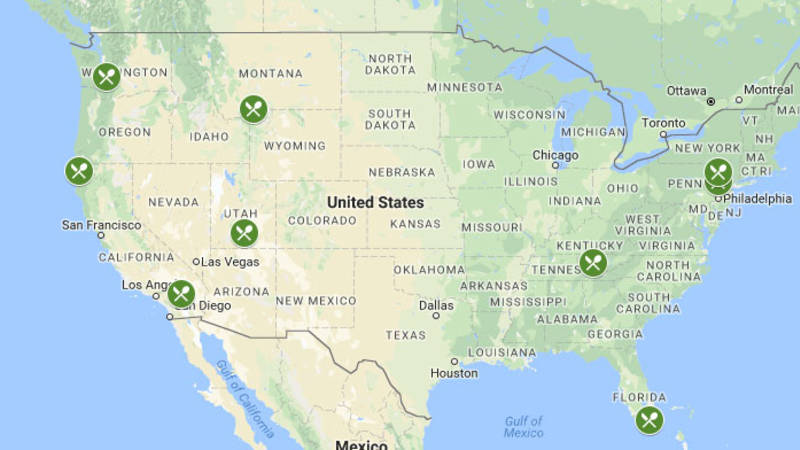 Get easy directions and links to our 10 picks.

Alligators are one of Everglades National Park’s largest predators, and at the Pit Bar-B-Q, they’re also part of the menu. This five-decade-old institution built near the northeastern corner of the park on a former go-cart racetrack serves a few salads, but the menu is decidedly geared toward meat lovers. The Pit credits the blackjack oak wood and its homemade basting sauce for the tenderness and smokiness of its ribs. And quality doesn’t trump quantity: According to the owners, the portions are “generous enough to feed a horse” (albeit one with an unusual diet).

Don Barger, NPCA’s senior regional director for the Southeast region, recommends the Lilly Pad Hopyard Brewery as a “a mecca for old local mountain guys and young rock-climbing hippies to enjoy food and music together in blissful harmony.” If you do not belong to either group, do not worry: This joint tucked in the woods right next to the National Park Service-managed Obed Scenic & Wild River in eastern Tennessee is welcoming to all, even the non-outdoorsy types. One recent patron said the atmosphere at the brewery and attached campground was so friendly that her husband considered camping for the first time in his life. A simple, rotating menu of bruschetta, vegetarian nachos and smoked pork sandwiches complements the Lilly Pad’s selection of “homegrown” beer made in part with the site’s own hops, honey and other ingredients.

Denali is on many national park visitors’ bucket lists, and this restaurant just outside the park entrance is equally deserving of their attention. Some patrons even land their planes across the street from the restaurant just to enjoy 229 Parks’ cuisine. The restaurant owes its name to the nearby milepost on the George Parks Highway. The menu, which changes based on what’s available that day, is heavy on Alaskan ingredients — some coming directly from the restaurant’s garden or its share in a reindeer herd. Chef Laura Cole says diners shouldn’t expect to find the usual fare or even Coke or Pepsi here (the restaurant serves homemade sodas), but they will find original and high-quality creations. Cole is back from shooting the latest season of Top Chef where she was the show’s first Alaskan contestant. She says the challenge energized her, so you can expect even more creativity out of her kitchen.

The restaurant at this 1920s arts and crafts lodge west of the Upper Delaware Scenic & Recreational River features innovative twists on Pennsylvania cuisine. Ingredients are sourced from local producers, and the tavern serves up local craft brews. The menu changes with the seasons and includes plenty of options for non-meat eaters. “The last time I ate there, I ordered a vegetarian entrée, and it was the star of the evening,” says Joy Oakes, NPCA’s senior regional director for the Mid-Atlantic region.

Built more than a century ago with the wood of the area’s majestic trees, the Requa Inn and its restaurant are a perfect complement to a visit to nearby Redwood National Park. The dinner is served family-style, and the menu is set. “You just sit, and the bowls and platters arrive for sharing around the tables,” says Ron Sundergill, NPCA’s senior regional director for the Pacific region. The produce comes from a local organic farm, and dinner is just “really excellent,” Sundergill says. One caveat: While innkeepers will try their best to accommodate dietary restrictions ahead of time, the single menu format will better suit diners who eat fish and meat.

Visitors to Boulder, Utah, one of the most remote towns in the United States, may not expect exquisite cuisine built on sustainable farming practices, but that’s what they’ll find at Hell’s Backbone Grill. Located near Capitol Reef National Park and Grand Staircase-Escalante National Monument, the restaurant serves ingredients from its “no-harm” organic farm, nearby orchards and local grass-fed beef producers. The two women who run Hell’s Backbone Grill regularly host visiting Tibetan lamas and follow Buddhist principles, so every creature is treated with the respect it deserves. As one Mormon lamb producer they work with says in one of their cookbooks, “the animals you come in contact with in this life will testify for or against you on the judgment day.” If you can’t make it there, the next best thing is to read the pair’s latest book, “This Immeasurable Place,” which is both a cookbook and a tribute to the national monument that is now under threat from the current administration.

Come for the scrambled eggs and stay for the Cambodian noodles. JT Country Kitchen in the small town of Joshua Tree near the park of the same name serves generous and yummy American breakfasts (the pancakes, milkshakes and the hot salsa draw rave reviews), but it also offers a few Cambodian specialties. The Cambodian American couple who ran the diner for years recently retired, but the new owners decided to keep the Cambodian dishes as an homage to their predecessors. They’ve also remodeled the place and created a new patio. The new ownership has not put a dent in JT Country Kitchen’s success, and NPCA’s Farnor warns that a wait is likely on weekends.

Located just outside the Delaware Water Gap National Recreation Area and a few miles from the Appalachian National Scenic Trail, this family-owned market and bakery caters to hungry hikers on a budget. The hot dog and pie “True Love” special is a favorite (the bakery offers more than 30 kinds of pies daily), but you can also fuel up on a variety of pastries, pot pies and BBQ fare or pick up your fill of local fruits and vegetables at the market.

Located just outside the north entrance to Yellowstone, the 65-year-old K-Bar Pizza has not been around as long as the world’s first national park but is an institution nonetheless. K-Bar serves Montana microbrews and uses local ingredients whenever possible. While the quality of the pizzas is a big draw, locals and park visitors alike keep coming back for the great service and friendly staff.