What happens when a desert baby visits the meadows of Yosemite?

I live with my wife and two young daughters at 6,000 feet, on a remote hilltop in Nevada’s western Great Basin Desert, up in the broken foothills and sage-filled valleys along the California line. This is a land of extremes, from intense aridity to flash floods, blazing heat to sweeping blizzards, wildfire to earthquakes — not to mention our libertarian survivalist neighbors, who aren’t shy about calling 911 to report UFOs or threatening the UPS driver with shotguns. This can be a challenging landscape to inhabit, especially in times of flood, mud, fire and snow, which might as well be the names of the four seasons we have here. This is a place where your kids learn the word “scorpion” about the same time they learn “milk,” where shoe-tying lessons come with instructions on what to do if you see a rattler while you’re playing in the dirt. 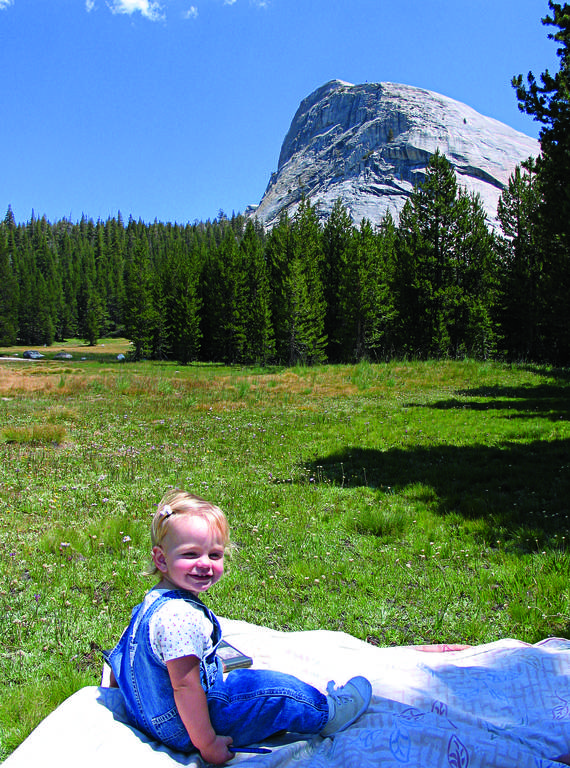 Young Hannah in Yosemite: Would a 15-month-old experience a toddler version of the awe her parents had always felt there?

It’s been fascinating raising Hannah and Caroline in this wild place and watching them become fully accustomed to an isolated high desert environment that most folks find utterly inhospitable. My girls loved it when a red-tailed hawk dropped a live gopher snake within 15 feet of them while we were out hiking, and they were thrilled when a coyote passed their bedroom window with a squirming jackrabbit in its jaws. But one downside of our girls toddling in the bootsteps of their desert rat father is that places familiar to most people strike them as alien. On one occasion, Hannah, who has no fear of bobcats or the blackness of the desert night, refused to have a picnic at a park in town because it was surrounded by tall trees. How could we be sure, she asked, that one of those trees wouldn’t fall on her while she was eating her peanut butter and jelly sandwich? On another memorable day, Caroline appeared perfectly mystified when water began falling unexpectedly from the sky. Although she was already six months old at the time, she had never experienced rain before.

My sharpest memory of this sort of alien landscape shock occurred when my wife and I took Hannah to Yosemite National Park for the first time. Yosemite had been important to Eryn and me for most of our adult lives — once I had even officiated a wedding ceremony atop Pothole Dome — and we thought that, at 15 months old, Hannah might be ready to visit the park, and might even experience a toddler version of the awe we had always felt there. I had just finished my book “John Muir’s Last Journey,” and I would be giving a talk at Parsons Lodge in Tuolumne Meadows, so it seemed the perfect opportunity to initiate little Hannah into the wonders of Muir’s old stomping grounds.

When we arrived in Tuolumne Meadows — which is only a three-hour drive from home when Tioga Pass isn’t snowed in — we wasted no time in gearing up to hit the trail. Eryn carried a daypack with camera, snacks, water and sunscreen, and I strapped Hannah into her baby backpack and began a stroll out into the lovely meadows that make this part of the park one of our favorite places to hike.

As we wandered along the main trail toward Parsons Lodge, the contrast between the Yosemite landscape and that of our home desert was stark. The beauty of the Great Basin lies in its captivating severity, in the way the sere yellows and browns of its desiccated hills blend with the shimmering gray-green of a vast sagebrush ocean. But here in the meadows, the green was so concentrated and radiant that I felt as if I had never experienced green before.

Hannah bounced along happily in the backpack, using her favorite expression, “seeum,” to point out various things she felt needed to be brought to our attention. Pointing at a wheeling kestrel above us, she said “seeum bird!” Gesturing toward a stand of arrowy pines on the far side of the meadow, she offered “seeum tree!” When we reached the Tuolumne River footbridge, I leaned forward carefully to give Hannah a bird’s-eye view of the sparkling stream below. She pointed excitedly and repeated only “seeum, seeum!” Her life experience as a desert dweller had not yet given her a word for “river.”

We walked to the middle of a lovely, grassy meadow, where Eryn lifted Hannah out of my backpack and set her down in the grass. As we prepared to share snacks and water, we noticed that Hannah suddenly seemed upset. She stared down at the grass as if something were terribly wrong — as if, perhaps, we had inadvertently positioned her atop an anthill. Her face wore a grimace, and she held her arms up as if she were afraid of the ground itself. Before we could determine what the problem might be, Hannah lurched forward onto her feet and toddled unsteadily away from us at what we knew to be her top speed.

“What is she doing?” Eryn asked.

“I have zero idea. But she seems to be on a mission,” I replied.

We ambled along behind our daughter as she moved as fast as she could manage across the flower-strewn, emerald green meadow. Driving forward with both the determination and the unsteady balance of a tiny drunk, she never so much as paused to look back at us, but instead toddled forward toward a goal that remained mysterious. Having covered an impressive 50 yards without face-planting, Hannah at last reached the sandy trail that had led us there. She halted abruptly, plopped down on her bottom with legs splayed and looked up at us with sparkling eyes and a bright smile. Sitting squarely in the middle of the trail, she used her hands to plow the dirt in front of her into a large mound. Then, having at last escaped the alien environment of a grassy meadow, our little desert rat held up two heaping handfuls of Yosemite trail dust, offering one to each of us as a gift.

A moment later, Eryn snapped a picture that has been sitting in a frame on my writing desk for the past 12 years. In it, Hannah wears denim overalls and smiles widely from behind a sky-blue pacifier. A flowery green meadow, encircled by conifers, surrounds her. Behind her rises the granite mass of Lembert Dome, a single, puffy white cloud floating above its brow. This is the indelible image of our kid enjoying her first experience in a national park. As her beaming face attests, it is a moment of unalloyed joy, because it is the moment in which a desert baby found her own way to make an alpine meadow feel like home.