In Baltimore, the Red and the Blue Wave Together as One

The flag at Fort McHenry reminds us what America stands for and how our nation has endured through decades of challenges.

Red states and blue states were all the buzz these last few months. And while the electoral map illustrates the political differences that defined the 2016 presidential election, it took a visit to Fort McHenry National Monument and Historic Shrine to remind me that we are a nation of diverse political persuasions and cultural backgrounds integrated into one great fabric called America. The reds and blues of the electoral map are the very same colors woven into our flag of broad stripes and bright stars. 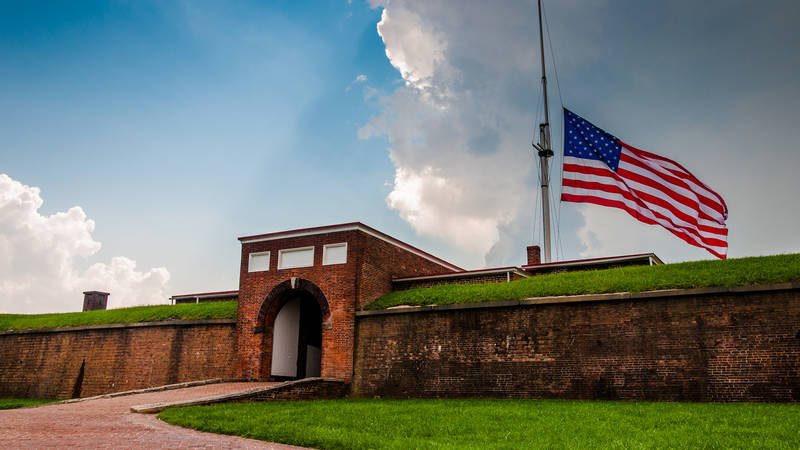 During the War of 1812, British forces sailed to Baltimore, Maryland, intent on attacking the city. But Baltimore was defended by Fort McHenry — a star-shaped fort perfectly situated on…

Over the years, America has been challenged by divisions and threats to our democracy. The Civil War was the greatest. But we also had to deal with Watergate, impeachment trials for Presidents Andrew Johnson and Bill Clinton, challenges to our basic rights from the Senate Un-American Activities Committee, and, early on in our democracy, presidential balloting by Congress that proved so prolonged and divisive in 1800, it threw the entire voting process into question and spurred a constitutional amendment changing how the Electoral College chooses its candidates. And then there were two world wars, Vietnam, and Iraq. Somehow we made it through these unsettling times with our democracy intact.

Fort McHenry, where Francis Scott Key wrote the Star-Spangled Banner, exemplified for me that America can be its greatest when facing challenges.

Fort McHenry sits at the mouth of the Patapsco River protecting the harbor at Baltimore. Named after James McHenry, the U.S. secretary of war at the time, the structure was finished in 1805 as part of a system of forts built to guard America’s primary East Coast cities. Although America declared its independence in 1776 and then won this independence through the Revolutionary War in 1783, the threat of foreign invasion was still very real, as evidenced by the 1814 Battle of Baltimore.

My girlfriend Craig and I started our visit by walking along the seawall where I tried to imagine what it must have been like as a soldier manning one of Fort McHenry’s many guns that night. I looked across the bay where a vast armada of British ships once sat anchored about 2 miles away, sending a barrage of cannon shells towards the fort, determined to bomb Fort McHenry into submission. The fort was all that stood in the way of the British taking over Baltimore.

The U.S. cannons had a range of about 1.5 miles, which kept the British ships far enough away that their cannons lacked accuracy, but this did not lessen the fierceness of the rocket’s red glare and bombs bursting in air. I cannot imagine the fear and anxiety that the U.S. soldiers must have felt. Nor that of the residents of Baltimore as they watched the bombardment from rooftops near the harbor. The fort withstood hits from the enemy fire all night, but it held during the “perilous fight.” 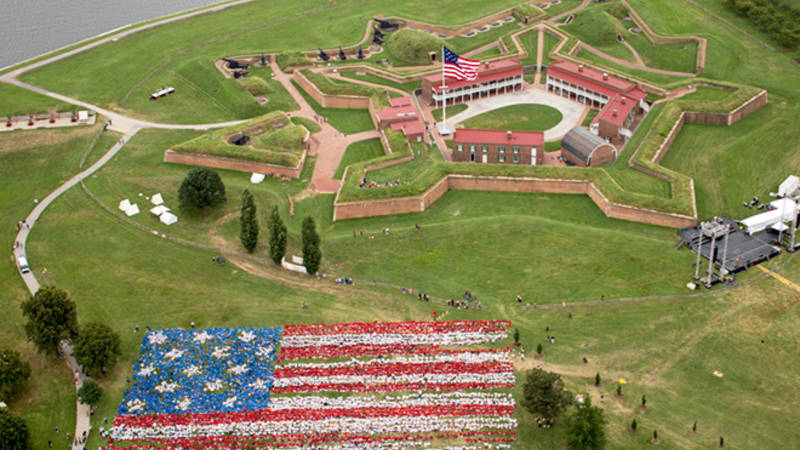 Fort McHenry National Monument and Historic Shrine in Baltimore, Maryland, is probably best known for its famous flag, which billowed over the star-shaped ramparts after a fierce British attack during the…

From the ramparts of a U.S. truce ship, the young Washington, D.C., lawyer Francis Scott Key watched the battle from the British side. He had traveled aboard the truce ship to negotiate the release of a friend, Dr. William Beanes, whom the British had arrested for allegedly violating a “pledge of good conduct” during a previous battle. Key and Col. John Skinner, U.S. commissioner general of prisoners, successfully negotiated the release of Dr. Beanes, then learned of the impending British plans to bombard Fort McHenry and were detained until after the battle. It was from the truce ship anchored in the harbor that Key observed, in the twilight’s last gleaming, that the fort’s gigantic flag was still there after the all-night attack. That very same flag can be seen today at the Smithsonian in Washington, D.C.

Inspired by what he saw in the dawn’s early light of September 14, 1814, Key wrote a poem he called “Defence of Fort McHenry.” It was first published three days later and was an immediate hit, gaining popularity across the country through newspaper publications at what was then lightning speed. A large electronic display at the visitor center now shows how quickly Key’s poem traveled from the Baltimore area to the far reaches of our young country. As was the way of the times, the poem was set to an existing hymn, “To Anacreon in Heaven.”

But the story of Fort McHenry doesn’t end with our national anthem, which was officially designated by Congress in 1931. Fort McHenry was renovated from 1829 to 1836 to serve as a training facility, a supply depot and a troop embarkation point during the Mexican-American War in 1846. During the Civil War, the cannons at Fort McHenry were pointed into the city of Baltimore to keep any citizens with ideas of joining the Confederacy in line. It also served as a prisoner of war camp for the Union Army from 1861 to 1865.

During World War I, the land around Fort McHenry was significantly developed into one of the largest military hospitals on the East Coast. With 3,000 beds and a staff of over 1,000 doctors, nurses and orderlies, Fort McHenry’s hospitals treated over 20,000 wounded soldiers. Doctors at the Fort McHenry hospitals made significant advances in facial reconstruction from war injuries during this time.

The fort’s many stories are well-told at the visitor center and through displays within the structures of the fort itself, which is well-maintained in its 1830s configuration. The Army relinquished the fort in 1933, and Congress officially designated the site a national monument and historic shrine in 1939.

But the flag and the anthem remain the center of attention here. After walking along the seawall and watching rafts of sea ducks known as buffleheads fish for dinner, Craig and I went into the fort itself just in time to watch staff lower the large flag that flies above the parade grounds. This daily ritual is a community affair where park visitors are encouraged to join in the lowering and folding of the flag — not as red voters or blue voters, but as Americans working together and respecting our flag and all it stands for.

It’s an encouraging reminder in these uncertain times that our flag is still there.