Making the most of retirement with a 40-foot RV, a patch of dirt and full-time seasonal volunteer work in the national parks.

A pop of static. Reg Wofford instinctively reaches down and adjusts the volume of his radio. Beside him his wife of 54 years, Laurie, speaks smoothly into hers: “We’re first on a jam at Willow Flats. There’s a griz on a carcass with  her cubs.”

As Laurie signs off and reclips her radio, the Woffords return their focus to the dynamic scene playing out before them under the unflinching blue of a Western sky. Willows, profuse and tangled, trace a creek bank in the distance and sea-glass-tinted sagebrush smudges the air like so much incense. In the middle of this wild Eden, surrounded by twiggy clumps of bitterbrush, a mama grizzly bear — broad of forehead and tawny of coat — teaches two cubs to scavenge for meat.

The moment is captivating and raw, and something that few have the good fortune to see. It’s those few who bring the Woffords to this particular corner of Grand Teton National Park today. The spectators, lining the roadside and jockeying for pictures, buzz with faintly contained energy. “People get so excited,” says Laurie, a spry, petite brunette. “That’s one of the fun things that we do — get to see the excitement of people who are seeing a bear for the first time or a moose or an animal on a bucket list.”

At the same time, Laurie says, “We don’t want people with their smartphones running out there to get close enough to get a good picture. It’s stressful for the animal, and it could be dangerous for the people. Or it could just push the animal away, and then nobody gets to see it.”

Reg and Laurie — 82 and 76, respectively — climb out of their vehicle, strap on neon-yellow vests and heft bright-orange cones from the back seat. They wade into the crowds of curious onlookers to direct traffic, answer visitor questions and provide a comfortable 100-yard buffer to the lunching bears.

It’s just another day in paradise for the Woffords, full-time seasonal volunteers with the park’s wildlife brigade. From late May through September, they work side by side in the shadow of the mountain range armed with name badges, volunteer patches and cans of bear spray. Their goal as members of the brigade is to keep people safe and animals wild.

Reg, a former marathoner with a wide grin and a lifetime’s worth of laugh lines, jokes that the job is far from predictable. They plot out their day each morning, he says, and then “everything changes.” They cruise down more than 200 miles of paved and unpaved roads, pausing at scenic overlooks and scouting for wildlife. They meander through the park’s 1,200 campsites spread among six main campgrounds to educate visitors about bear country and remind people to secure food items before leaving their picnic tables or tents. They mediate wildlife-induced traffic jams, which run the gamut from two visitors pausing by a chipmunk to dozens of people and vehicles congregating near a bear, wolf or moose for hours on end.

In the course of a single day, they might assist with a bear jam at Signal Mountain, talk to visitors hiking along String Lake or even get called to help relocate a campsite’s paper wasp nest. Through it all, they answer a loop of endless questions like “When do you let the bears out?” with sincerity and enthusiasm.

Reg and Laurie are just two of more than 1,000 volunteers whose efforts benefit Grand Teton every year. Many roll up their sleeves and lend a hand for an afternoon or a weekend. Far fewer, between 100 and 130, work full time for months in a row. 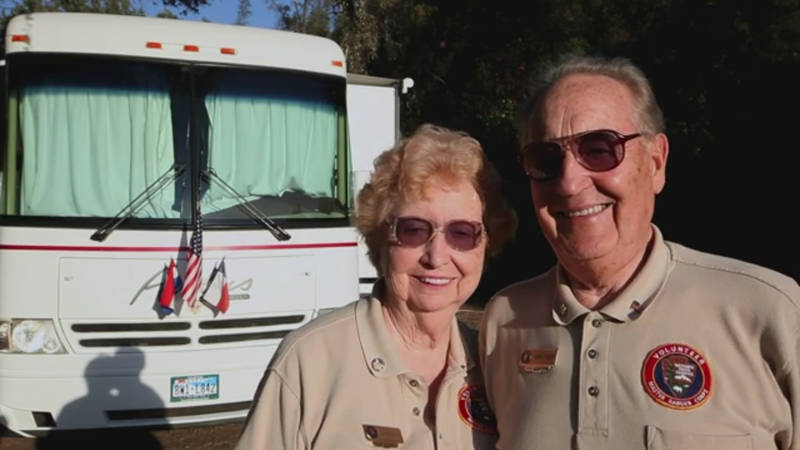 The Other Side of the Clouds

A behind-the-scenes look at an extraordinary couple who volunteers full-time at Yosemite National Park.

Park system-wide, the number of volunteers has more than doubled since 2008. Last year, volunteers outnumbered National Park Service staff roughly 20 to 1 and expanded the financially strapped agency’s ability to meet the needs of hundreds of millions of visitors. The core of this volunteer force, nearly one-third of the total, are those ages 54 and older who help staff visitor centers, maintain trails and lead educational programs. Combined, more than 400,000 volunteers contributed 7.9 million hours of service in 2015, the equivalent of over $152 million of labor.

Even in this mammoth force of dedicated people, however, Reg and Laurie stand out. When I worked as an intern with Grand Teton’s wildlife brigade in 2009, I found their passion both inspiring and humbling. My compensation for the 10 weeks was spare but adequate: shared park housing and a small weekly stipend. Reg and Laurie, in comparison, earn a patch of dirt in an employee campground for their 40-foot RV. An impression of their verve and easy partnership has stayed with me all these years. When I call them to reconnect and learn more about their story, they’re as warm as I remembered.

Laurie tells me that her fondness for the Tetons dates back to her childhood in Texas. Her parents, a second-grade teacher and a school superintendent, packed up the family each summer and drove to parks. One year on the overnight drive to Rocky Mountain National Park, Laurie woke up to a mountain’s craggy maw outside her backseat window. “I’d never seen a mountain in my life,” she says, “and I was just absolutely blown away.” The following year, her family traveled to Grand Teton to stay at a now-defunct guest ranch along Cottonwood Creek. They were enchanted and returned summer after summer during her teenage years.

Reg came to the national parks a little later in life. His job with Westinghouse Electric required extensive travel, and he visited parks as often as he could during stateside trips. As he and his family explored seashores, Civil War sites and natural wonders, he came to appreciate the diversity of the park system.

After retiring in 2001 from Hawaii-based jobs — Reg from Westinghouse and Laurie from Fairway Systems, a company that automates golf course tee times — the Woffords embarked on an enviable park adventure. They purchased an RV in Florida, picked up a senior pass for entry into all the national park sites and started driving. From the grass-laden rivers of the Everglades and the wilds of Acadia to the sienna cliffs of Zion and vast deserts of Joshua Tree, they zigged and zagged. They didn’t mind the tumbleweed lifestyle or close quarters, but a few years later, they found themselves plagued by a peculiar sense of aimlessness. “It was time for us to make a contribution somewhere and not just be wandering at loose ends,” Laurie says. “At some point you want to be useful.”

The first year, circumstances aligned, enabling them to fill a sudden vacancy at an information station on the Schoodic Peninsula of Acadia National Park. That was 2004. With the exception of the year they drove the Alaska Highway and toured Denali National Park & Preserve, the Woffords have been volunteering full time at parks every summer since. They coast-hopped between Acadia and Olympic National Parks before settling in Grand Teton in 2008.

Last year, the Woffords’ dedication to the park, its wildlife and the wildlife brigade was formally recognized. A lapel pin on their uniforms now identifies them as recipients of the President’s Lifetime Achievement Award for volunteers, an honor granted to those who have donated 4,000 or more hours of service.

“They’re the spunkiest couple I’ve run into. They go out there every day and work harder than most seasonal rangers,” says Carl Kautz, a former Grand Teton ranger who worked with them for two summers. With a chuckle he adds, “I want to be like them when I grow up.”

The Woffords’ daughter, Robin Polhemus, whose earliest park memory involves a pell-mell run down a steam-shrouded boardwalk in one of Yellowstone’s hydrothermal areas, views her parents’ volunteer work as an “act of respect and responsibility for our nation’s public lands.” She believes the volunteer lifestyle, not to mention the miles of hiking, has kept her parents young. “Their age doesn’t define them,” she says. “They can do whatever they want. And they do it well.”

Every summer, Polhemus and her family make the trip from Oahu to Wyoming to visit Laurie and Reg in the park that’s become their second home. “I’ve never seen my parents as happy as they are in the Tetons,” she says.

Asked why they return each year, the Woffords don’t hesitate: “The mountains,” Reg says. “The people,” Laurie adds. A pause. A laugh. “The animals.”

After a moment of reflection, Laurie elaborates: “The mountains are just the most spectacular, but it’s the people, I think. The family we’ve developed here in the wildlife brigade is one of the strongest drives that keep us coming back.”

For nine summers, this group has gathered for potlucks at the Woffords’ campsite. There’s a new picnic table now, 2,000 twinkle lights draped in the pines and a few more tree-stump seats around the fire, but little else has changed over the years. Holding paper plates sagging with hamburgers and pasta salad, the brigade members swap anecdotes about visitors and try to outdo each other with absurdities found abandoned at picnic tables. They marvel at some visitors’ naivety and share in the small, precious moments of the job: a child’s first bear sighting or a dawn-hushed morning along Jackson Lake. Reg and Laurie might tell the story about the time they assisted a distressed hiker near Garnet Canyon who spent an unexpected night on the mountain. Or they’ll talk about their children’s upcoming visit or glean tips for their next backcountry excursion. Invariably, as the darkness of the mountain night deepens, another neighbor walks by and an invitation is cast.