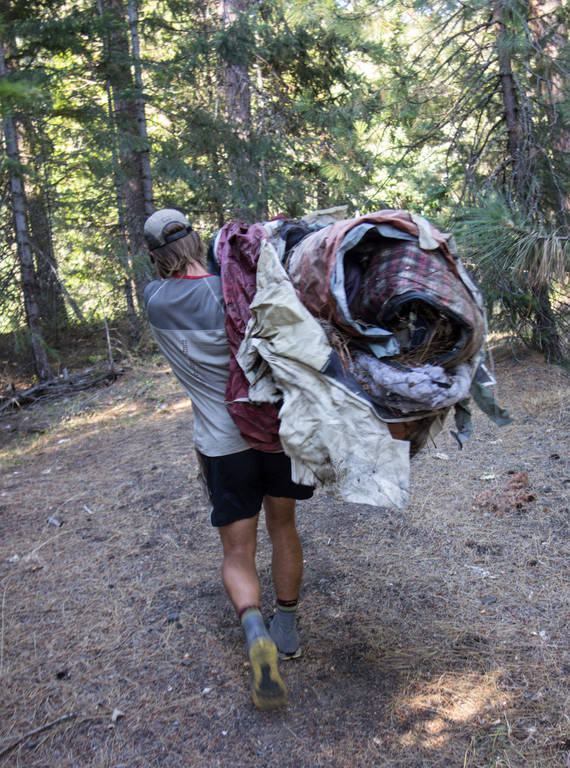 On the PCT near Ashland, Oregon, the friends found an abandoned camp and packed out over 50 pounds of trash.

In December of 2014, Seth Orme and Paul Twedt decided that their guiding word for the season would be “audacious.” They worked together as outdoor guides, but during the long Minnesota winter, they spent time in a warehouse fixing canoes, musing about their next grand adventure and shouting ideas to each other over the roar of the sanders. The reigning question was, as Twedt put it: “What is the most audacious thing we can do to take control of our lives and get outside and do something worth doing?”

Then, while hiking with friends in North Carolina, Orme had a light-bulb moment. What if they hiked the length of the Appalachian Trail, collecting and hauling away all the trash they found as they walked? Twedt was instantly sold. They recruited another pal, started saving money, dubbed their mini-collective “Packing It Out” and set up a blog. Weeks later, in late March, Orme, Twedt and Joe Dehnert were walking north from Georgia with plastic garbage bags in hand.

At NPCA, we are working to reduce trash in parks. To learn more about our zero-landfill initiative and partnership with Subaru, go to www.npca.org/zerolandfill.

Over the next four and a half months, they picked up 1090.5 pounds of trash along 2,190 miles of the trail, which is part of the National Park System. Then in 2016, Twedt and Orme followed up with an even more audacious goal: cleaning up the 2,650-mile-long Pacific Crest Trail, which cuts through the Sierra Nevada and Cascade mountain ranges, six national parks, 25 national forest units, and 48 federal wilderness areas. By that point, a few media outlets had covered their Appalachian Trail quest, and the two friends had acquired some sponsors, which donated gear and food. They set out from Southern California last May and reached the Canadian border nearly five months later, having collected (and responsibly disposed of) 721.7 pounds of garbage that they’d carefully weighed with a two-ounce luggage scale.

“It’s all our outdoors. It’s our public lands. It’s not just a commodity or someone else’s problem,” said Orme, 26. “At the end of the day, we want to inspire people. If everyone picks up trash, then there’s not going to be anything left out there.”

At first, said Twedt, 30, they didn’t quite realize what they were getting themselves into. It’s difficult to track the number of people who hike some portion of the famous paths, but according to the nonprofits that help manage them, each year the Pacific Crest Trail sees as many as 1 million visitors, and about 3 million hit the Appalachian Trail. And the number of “thru-hikers” who walk the entire length of the trails keeps growing. Jack Haskel, a trail information specialist at the Pacific Crest Trail Association, credits the increase in part to a “worldwide movement to get outside” and also mentioned the bestselling memoirs “Wild” and “A Walk in the Woods,” accounts of hiking the PCT and AT (as enthusiasts call them) that were both recently made into Hollywood films.

The AT is quite rocky and steep in places, and some hikers, particularly novices who are surprised by the difficulty of the first stretch in Georgia, end up shedding belongings to lighten their loads. Twedt’s crew found 77 pounds of trash on the first 40 miles of the trail. “We were kind of laughing at ourselves,” he said. “We were thinking, ‘Did we bite off too much? This is going to be outrageous.’ And it was.”

The items they found on the two trails included sleeping bags, headlamps, knives, a plastic tricycle, dirty diapers, T-shirts, bottles, cans, cardboard boxes, a 10-person tent, a cooler filled with rotting food, a metal TV frame, an enamel kettle, a pair of leather boots with an extra sole nailed to the bottom, 41 Mylar birthday balloons and a rusty eyelash curler. They stumbled across three mattresses, two of which were queen-size and weighed around 70 pounds.

Food wrappers and toilet paper were the most common waste they spotted. They didn’t carry out the latter, but they heroically buried it — usually around 10 times a day on the PCT.

Over time, they developed an eye for figuring out where people would dump trash. Sometimes, they’d spot a comfortable resting spot, and lo and behold, a pair of discarded boots would be neatly tucked behind a log. Or they’d flip a rock and find a bag of garbage. “You can tell these people know they’re doing something wrong, because they hide it,” Twedt said.

They didn’t remove every last thing they found. One ground rule they established early on was that they wouldn’t risk injury in the name of trash. So they didn’t attempt to move a giant spool of barbed wire, and they left behind some balloons because they were caught out of reach in high tree branches. They also passed by an     abandoned school bus.

Tossing or recycling all that stuff often proved to be complicated, especially on the PCT, where trash cans can be scarce. They ended up carrying the six-pound leather boots 105 miles through Kings Canyon National Park before ditching them. The enamel teapot, which weighed in at 4.5 pounds, was with them for 85 miles.

Disposal was a little simpler on the AT because of its many access points and short-term visitors. They were often able to find trash and recycling bins, and when that wasn’t an option, they’d ask day hikers to throw out garbage for them. Over many miles, they perfected their 30-second elevator speech about their mission, and amazingly, no one ever said no.

Others helped carry heavy loads or found that the pack-it-out ethic was contagious and started removing trash themselves. The duo frequently encountered “trail angels” who had heard about what they were doing and, won over by their cheer and righteousness, would offer them food or housing or rides. “When I see young people doing good things like this, I think it should be appreciated,” said Glenn Zollner, a 65-year-old veteran from Oregon, who drove them a couple of hours to a trailhead. “I thought it was noble.”

Despite all the support and free energy bars, the project was physically and mentally overwhelming at times. Over all those months, they hiked between 20 and 41 miles a day and burned through multiple pairs of shoes on each trail. Orme hit a low point three days before finishing the AT, when he was struck with Lyme disease and developed severe symptoms including temporary facial paralysis. Twedt made it to the Maine border on that trip, but was unable to finish because of a torn meniscus. “I could barely walk anymore,” he said.

Orme said he’s fine now after nipping the Lyme disease in the bud. Twedt is managing his knee injury with physical therapy and yoga, and his doctor eventually gave him clearance to walk the PCT. He described reaching the end of the trail in September as “surreal.” A wave of excitement was followed by a question mark. “What happens now?” he wondered. “How do we even get home?”

Their audacious schemes continue to evolve. Orme is in the process of planning a four-month cycling trip from Cumberland Island National Seashore in Georgia to Seattle. He wants to stop in as many national parks as possible and organize cleanups at popular scenic areas along the way. Twedt plans to move to a town near Seattle and continue his pack-it-out efforts there.

For people who want to get involved or donate money, they have a ready-made response they’ve rolled out many times in the last couple years: “Just carry an extra grocery bag and pick up trash that you find,” Twedt said. “Put that money into getting to another trailhead and having an adventure yourselves and cleaning up a spot while you’re at it.”