A Glimpse into a Dark Part of America’s History

A traveling park lover takes his mom into a windy desert landscape to try to imagine what life was like behind the barbed wire fences of a war relocation center more than 70 years ago.

This story is part of a series by traveling park lover Jim Stratton exploring some of America’s most fascinating and least known places.

I visit national parks to experience America, warts and all.

Luckily for me, my mom is a good sport about such things. Traveling with her to national parks has become a regular part of my life. We spent her 80th birthday touring the geyser basins of Yellowstone a few years ago. We’ve been to Glacier and Glacier Bay and Joshua Tree. We’ve even explored national parks overseas, like the Galapagos. However, we’d never gone to one of the smaller, more obscure parks together — until last fall.

Mom needed to get herself and her red Chevy Impala from Eugene, Oregon, to her winter habitat in Palm Springs, California. As her driver, I made sure we’d stop at Yosemite on the way south — and I picked a route along the eastern edge of the Sierra Mountains to include an important site from World War II, Manzanar National Historic Site.

#{image.caption}
The author and his mom spend time at Yosemite before heading south to Manzanar.   Photo courtesy of Jim Stratton.

Manzanar is one of several National Park Service sites helping us to remember the injustice of interring innocent civilians during World War II. The country had been at war for a little more than two months when President Franklin D. Roosevelt signed Executive Order 9066 in 1942, giving U.S. armed forces broad powers to incarcerate anyone in the name of military defense. The government overwhelmingly used this power to imprison Japanese and Japanese-Americans for having “foreign enemy ancestry.” Ultimately, the military kept 120,000 people under armed guard, mostly in isolated areas of the West, forcing them to leave their homes, businesses, possessions and normal lives behind for the duration of the war.

Interning U.S. residents because of their ethnic background and not for any real threat to national security must never, ever happen again. And who best to help us remember that story than the National Park Service, in collaboration with some of the very people who spent time at the Manzanar War Relocation Center.

So after a walk with Mom along the edge of Mono Lake and a brief visit to Tuolumne Meadows in Yosemite, it was back onto highway 395 for a glimpse into a dark part of America’s history. 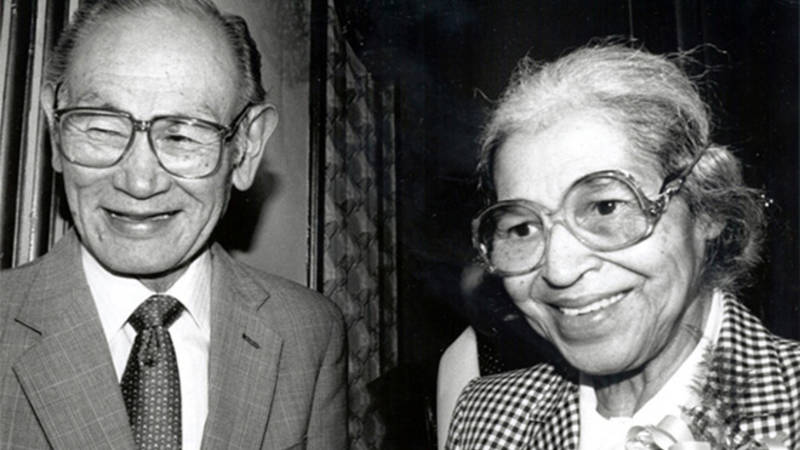 The Legacy of Fred Korematsu

He fought against his forced imprisonment, all the way to the Supreme Court. Today, the National Park Service helps interpret the dark history behind World War II incarceration camps.

Of the 10 internment camps scattered across the country, only Manzanar remains much as it was 75 years ago. Its location in the high desert of the East Sierra under the shadow of Mt. Whitney ensured that it would remain today much like it was in 1945. Not many people want to live here, and for good reason. It is insanely hot in the summer and icy cold in the winter. And the wind never stops blowing.

We bent into that wind as we waited on the steps for the visitor center to open and tell us its story. The visitor center is in the camp’s original auditorium building, and the walls speak — literally. When the site was established in 1992, many of the people who lived out the war at Manzanar were still alive, and their first-person accounts are the backbone of how the Park Service interprets the internment history. The site offers multimedia displays so you can actually hear the voices of the people interned at Manzanar as they tell their own stories.

In addition to the visitor center, the Park Service has reconstructed several housing barracks so you can imagine what it was like to have your life reduced to a suitcase and end up in a place like this. A 3.2-mile auto tour gave us a sense of just how big this place is. We saw roads, some foundations of buildings and ornamental gardens built by residents who tried to make this desolate place a bit more like home.

Over 10,000 people lived in the 500 acres that were developed. They stayed for years. We stayed for hours and tried to imagine what it was like. My mother was particularly moved. She remembers Japanese-Americans in her hometown being taken away. It just didn’t make any sense to a 10-year-old girl from southern Oregon. It still doesn’t.

What makes the National Park System so engaging to me is its diversity. Both Yosemite and Manzanar tell important stories about our country, and to fully understand and appreciate America, we need both the good and bad chapters in the continuing evolution of our history.

As my mom and I left Manzanar, a profound reflective silence filled the car. Interning Japanese and Japanese-Americans during WWII was one of America’s worst moments. I am constantly amazed at how the Park Service remains sensitive, balanced and accurate in how it shares these stories from our past. And these stories must be told, so this history is never repeated.