Our National Parks and a Changing Climate

How NPCA and its supporters are working to address climate change. 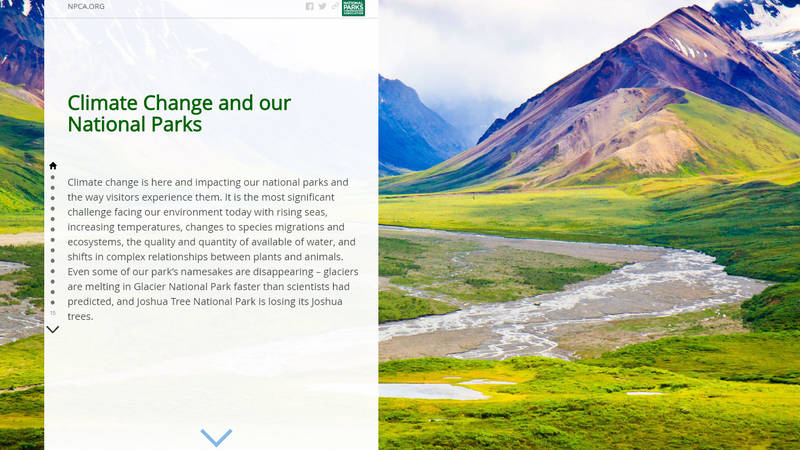 Climate Change and Our National Parks

See an interactive map highlighting some of the national parks facing the effects of climate change.

Climate change is the most significant challenge facing our environment today. It affects every national park, and it harms different ecosystems in very different ways. Portions of coastal parks like Everglades and Cape Hatteras are eroding into the sea from rising tides. Forested parks like Rocky Mountain and Great Smoky Mountains are experiencing record wildfires. Desert parks like Joshua Tree and Grand Canyon often lack adequate water to sustain their plant and animal life. And alpine parks like Glacier and North Cascades will have no glaciers left within the next few decades. All are at risk.

At NPCA, we take these threats seriously and have two simple but challenging goals to safeguard our parks — to reduce the pollution that is causing climate change and to help parks better withstand and adapt to the effects from climate change that are already underway.

How NPCA and its supporters are making a difference

It is imperative that greenhouse gas emissions decline if we hope to avoid the worst ecological damages associated with climate change. Outdated coal-fired power plants and fossil fuel drilling operations on lands surrounding parks are both major contributors to air pollution in national parks, as well as major sources of greenhouse gas pollution. NPCA works to enforce and strengthen laws that protect our parks’ air and climate, including the Environmental Protection Agency’s Regional Haze Rule and the Bureau of Land Management’s Methane Rule.

The Regional Haze Rule addresses a promise made by Congress 40 years ago in the 1977 Clean Air Act to fully restore our most iconic parks and wilderness areas to natural air quality. NPCA and its supporters have fought for more than a decade to ensure that promise is kept. As a result of our efforts, dozens of highly polluting coal-fired power plants that were fouling park skies have either shut down or switched to cleaner technology, removing 52 million tons of carbon dioxide from the atmosphere each year. Park skies are cleaner today than they were 10 years ago, but we still have a long way to go. Most of our national parks are decades – and some even centuries – away from fully restored air quality. Meanwhile, the Trump administration is trying to backpedal on park air pollution cleanup plans rather than continue on the path to improving park air. NPCA will continue to push for reductions in air and climate pollution until we achieve the goal of natural park skies.

The Methane Rule seeks to reduce the needless venting and flaring of natural gas from oil and gas operations on federal lands, a process which releases methane into the atmosphere. Methane is a powerful greenhouse gas and the second most significant driver of climate change after carbon dioxide. It also contributes to air pollution in national parks downwind of oil and gas operations. NPCA has advocated for this common-sense regulation, which requires the capture of methane, because the rule protects park air quality while mitigating climate pollution. Unfortunately, the Department of the Interior intends to review the Methane Rule and may either rescind it entirely, delay it by years or weaken it. NPCA will continue advocating for this rule.

Protecting parks from the effects of climate change

Climate change is already harming the environment, and the effects will grow worse the longer our leaders delay action to bring greenhouse gas emissions under control. Our communities must prepare for these impacts, and so must our national parks.

Healthy ecosystems are better able to withstand the effects of climate change if they are not fragmented, polluted or degraded. NPCA’s goal is to ensure the national parks are as resilient as possible and assist them in adapting to changes that are already happening. Our approach is to restore degraded park resources to good ecological health, and prevent new harm to park resources.

A major focus of NPCA’s restoration work is healthy waters. We help lead several major water system restoration campaigns in the Great Lakes, Everglades and Chesapeake Bay, all areas with numerous national parks. We know, for example, that restoring the flow of fresh water into Everglades National Park will help prevent saltwater from intruding into sensitive park ecosystems as climate change causes sea levels to rise.

Restoration of wildlife habitat is also important for climate-resilient parks. As the climate changes, food and water resources may shift, causing animals to move out of their existing homes in search of more suitable habitat. NPCA is working to ensure that iconic park species such as Yellowstone’s bison and pronghorn are free to roam to new lands outside park boundaries that provide them with suitable homes over the long term.

Unfortunately, even as we work to restore park lands and waters, we must also confront new threats to the parks’ resilience. One of the biggest threats in recent years is the fragmentation and degradation of park landscapes by industrial energy development. When not properly sited or carefully regulated, drilling and mining for oil, gas, coal and minerals pollutes park air and water, cuts off movement of park animals, and makes parks less able to tolerate additional stresses brought on by climate change.

NPCA works to prevent fragmentation of park landscapes by advocating for better advance planning for energy development on public lands. For example, we supported a collaborative “Master Leasing Plan” process for oil and gas development in the greater Canyonlands region that protected critical areas near Arches and Canyonlands National Parks while allowing development elsewhere. NPCA is working to advance similar collaborative landscape-scale planning efforts around other national parks. Our goal is to ensure that national parks maintain a high level of connectivity to healthy lands and waters outside their boundaries, which ultimately will ensure the long-term health inside their boundaries.

NPCA will continue to work to reduce the threat that climate change poses to our national parks.