This Jamaica Bay Wildlife and Nature Tourism StoryMap provides facts about 50 species of animals that are found at Jamaica Bay, and information about interesting places to visit. From the Lenape word “Yameco,” or beaver, the Jamaica Bay wetlands are a highly biodiverse ecosystem located near New York City. We believe that a greater awareness of the facts about wildlife and their threats will inspire people to contribute to the conservation of the important habitat of Jamaica Bay.

What is the Jamaica Bay Wildlife and Nature Tourism StoryMap? 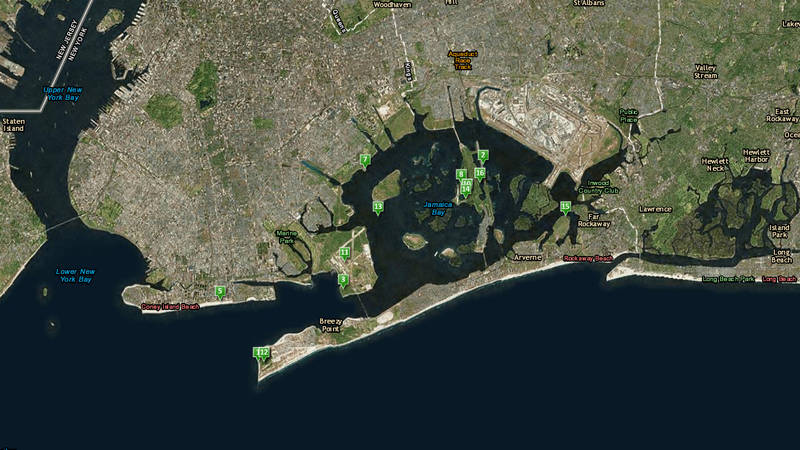 The Jamaica Bay Wildlife and Nature Tourism StoryMap is an interactive, online map that can be viewed from your computer, tablet or phone. It contains ecological information about 50 species of animals found in Jamaica Bay, New York City. Each point represents a sighting of an animal in the past–there is no guarantee that you will see the same animal if you visit the same spot! Some of these sightings were recorded from biodiversity surveys, natural history collection specimens, and citizen scientists just like you! To protect wildlife from poaching and harassment, some of these points are approximate or representative. We hope that this map will inspire you to explore the natural areas around Jamaica Bay and to learn about the wildlife that lives here.

Information for this map comes from the Encyclopedia of Life, knowledge of local naturalists, the Global Biodiversity Information Facility (GBIF), iNaturalist, and eBird. iNaturalist and eBird are free, online tools and apps that you can use to record the wildlife that you see, even right in New York City! The Macaulay Library of Cornell provided videos and audio, and many photographers donated images for this project.

Why did NPCA create this map?

We feel that it is critical for management and development plans that impact Jamaica Bay to be based on sound ecological science. This is why NPCA is devoted to supporting a Jamaica Bay Database Initiative. By staying committed to the important biodiversity that depends on these wetlands to survive, we can ensure that this ecosystem will be healthy for generations to come.

At NPCA, we hope that you will explore this engaging interactive map, but also that you will venture out to Jamaica Bay to discover its rich natural heritage yourself! If you are aware of the environmental and cultural contributions of these magnificent species, perhaps you might be inspired to learn more, to volunteer your time, and to speak up to protect the sensitive biodiversity of these urban wetlands. If you love Jamaica Bay and want to strengthen support for this National Park unit, join NPCA and become a Jamaica Bay Advocate to learn about the many opportunities you can participate in to increase awareness of this important, unique site.

Why is Jamaica Bay important?

Jamaica Bay Wildlife Refuge, an 18,000 acre wetland estuary, is the only wildlife refuge that is managed by the National Park Service, and the Bay has been designated as an “Important Bird Area” by BirdLife International. As well as being a key stopover during seasonal bird migrations, Jamaica Bay provides needed breeding grounds for many species, including threatened and protected species like the Piping Plover and Peregrine Falcon. Its habitat also supports Atlantic Ridley sea turtles, harbor seals, and many other animals, all within the boundary of New York City. Because of its close proximity the largest city in the United States and some of the most densely populated places on Earth, Jamaica Bay provides priceless opportunities for wildlife viewing, outdoor recreation, and environmental education for millions of people. Jamaica Bay also provides a model for how urban areas and important wildlife areas can coexist.

Jamaica Bay is important as a wetland ecosystem. Since the 1600s, over half of the natural wetlands of the contiguous United States have been drained for conversion to other land uses. Our wetlands are threatened by pollution from chemicals, excess nutrients, and sediment; they are also sensitive to many of the effects of climate change including higher temperatures, changes in rainfall, increased frequency and severity of storms, sea level rise, and higher levels of carbon dioxide in the atmosphere. When we lose wetlands, we lose the benefits that they provide, including protection from flooding and drought, aesthetic and recreational services, and critical habitat for birds and other species. Coastal wetlands, like the salt marshes of Jamaica Bay, only make up 38% of the total wetland area in the lower 48 states; on the East Coast, they are being lost at two times the rate that they are being restored.

Jamaica Bay is a salt marsh, which is a special type of wetland that provides an important additional benefit: it can capture and store excess contaminants and nutrients like carbon and nitrogen, even from fertilizers. In a way, the Bay acts as a liver for the New York City area, filtering and eliminating toxins and nutrients—but only when contaminants are in moderate quantities. For example over time, too many nutrients can become a bad thing, which can lead the salt marshes to disintegrate into mudflats. Over all of the eastern United States, we are losing our salt marshes at a staggering rate. Recently, more stringent regulation of water treatment and sewage management have led to improvements in Jamaica Bay, but there is still much work to do to ensure the conservation of these important marshes.

On top of all of these important ecological roles, Jamaica Bay is especially unique because of its close proximity to New York City. This provides an opportunity to better understand the relationships between people and natural areas like the Bay. Due to its location in the north of the Mid-Atlantic region and the existence of naturalist records dating back over a century, Jamaica Bay helps us understand the changes that are occurring in the wildlife of this area.

The damage caused by Hurricane Sandy including the saltwater breach into West Pond is just one example of how climate change and other human-related factors can influence sensitive wetland habitats. By looking at changes in the water quality, vegetation, wildlife, and more in the Bay, we can begin to understand not only Jamaica Bay, but the underlying linkages between our natural world and ourselves.