The closest oil and gas lease to Hovenweep National Monument

Facebook Twitter
In many cases, as little as 2% of recently leased land around Hovenweep National Monument has been surveyed for cultural and archaeological artifacts. Without swift action, the area could be industrialized before we even know what we stand to lose.

The lands of Hovenweep National Monument in southeast Utah show evidence of Ancestral Puebloan inhabitants and cultures as far back as 1200 and 1300 A.D. The Puebloans constructed a series of intricate multistory towers overlooking canyons and the arid desert landscape, demonstrating a close connection between civilizations at nearby sites such as Chaco Canyon and Mesa Verde. Hovenweep is also home to some of the best remaining examples of the skillful masonry of this era.

One prominent example in the region is Hovenweep Castle — an archaeoastronomy site that features a solar calendar, marking the beginning of each solstice. Other still-existing structures hold many additional mysteries to uncover.

Prior to the Trump administration, the Utah Bureau of Land Management had recognized the importance of the landscape surrounding Hovenweep National Monument and was slated to develop a Master Leasing Plan, a “smart from the start” approach to leasing designed to ensure that oil and gas development near sensitive places like national parks is done with consideration and care for the many nondrilling uses of the land. 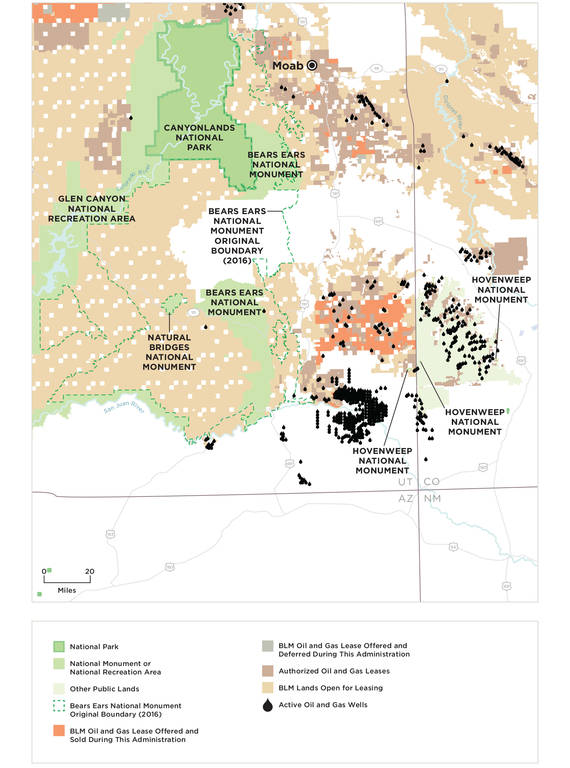 However, the Trump administration immediately targeted this region for development — first by reducing the size of the neighboring Bears Ears National Monument by nearly 85% and leaving that previously protected landscape open to mineral, oil and gas development. In fact, the administration has nearly completed a new management plan for the smaller Bears Ears National Monument that jeopardizes everything the monument was originally created to protect, including extraordinary, sacred landscapes and troves of priceless cultural resources, while leaving the landscape that was removed from the monument open to potential development. The administration is now leasing heavily in the region against the protests of tribes, archaeologists, nearby communities and conservation groups.

Listen to the May 19, 2020 recording featuring Kurt Riley, former governor of the Pueblo of Acoma, and Amanda Podmore, consultant for NPCA’s Southwest and Energy teams.

The region is home to thousands of historically significant cultural sites, few of which have been properly inventoried or studied. Without a comprehensive resource analysis, this landscape could be industrialized beyond recognition before we even know what stands to be lost. The All Pueblo Council of Governors in New Mexico, the Hopi Tribe, the Ute Mountain Ute and the Navajo Utah Commission have all called for a moratorium on new leasing until a full cultural resources inventory — including sacred sites still used today — has been completed.

Additionally, Hovenweep National Monument is recognized as an International Dark Sky Park of the highest tier, designated for its exceptional quality of starry nights and nocturnal environment. Because light pollution from oil derricks and methane flaring can be seen from more than 35 miles away, the quality of this pristine dark sky is also under threat.