The Beaver That Didn’t Give a Dam

By Nicholas Lund
Winter 2016: The Beaver That Didn’t Give a Dam

Solving the mystery of the ancient Palaeocastor.

Pioneering ranchers moving into Sioux County, Nebraska, in the mid-1800s began finding odd structures sticking out of eroded prairie hillsides. They were rocks, it appeared, but unlike any rocks the cattlemen had seen before: tubes, about as tall as a man and as thick as his arm, wound up into perfect spirals like fusilli pasta. According to an early account, these whorls were so dense in some places they appeared to form “a veritable forest” along the prairie. The ranchers began calling these strange structures “devil’s corkscrews,” and the name stuck. Based on the number of these corkscrews found on the plains, the devil had one heck of a party in Sioux County.

When rancher James Cook found devil’s corkscrews on his property along the Niobrara River in 1891, he alerted Erwin H. Barbour, a geologist on an expedition nearby. Barbour dug some of the spirals out of the ground and found they were actually big twisted straws filled with calcified roots, sand, and silt. These corkscrews weren’t rocks at all, Barbour determined; they were fossils—but fossils of what?

Barbour named the spirals Daemonelix—a Latin version of “devil’s corkscrew”—and began trying to answer that question. Because the tubes were formed of fibrous materials, Barbour assumed Daemonelix were the roots of fossilized plants, perhaps the remains of giant freshwater sponges. Much of what became the Great Plains of the United States was once underwater, after all. Soon other scientists weighed in, their guesses focusing on other fossilized remains that were occasionally found when the base of a Daemonelix was broken apart: rodent bones. 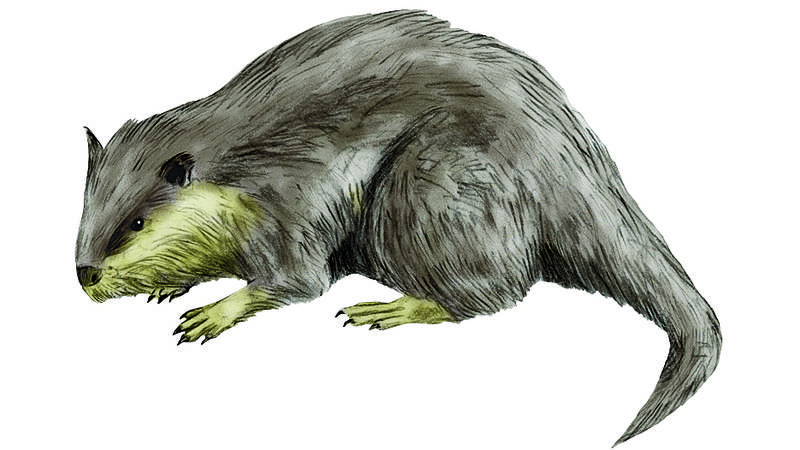 Paleontologists thought that the repeated discovery of an extinct rodent’s bones was too much of a coincidence and in 1893 proposed a new theory: The spirals weren’t the remains of organisms but were the remnants of intricate spiral burrows dug by the rodents found entombed in the base. Scientists confirmed the link in 1905 after finding scratch marks on the inside of the spirals indicating that they had been clawed out of moist soil. And with that, America was introduced to one of its oddest ancestral creatures—a family of 22-million-year-old, spiral-burrowing land beavers named the Palaeocastor.

Meaning “ancient beaver” (Castoridae is the family that includes beavers), the several known species of Palaeocastor most likely looked like a cross between a modern North American beaver and a gopher and lived only in what is now the American Midwest. They had stubby tails, small ears, and eyes like gophers, but, unlike most burrowing mammals, they had the super long, quickly growing front teeth of modern beavers.

ONCE UPON THE SAVANNAH

Visitors to Agate Fossil Beds National Monument can see the remains of other extinct creatures (in addition to the Palaeocastor, above) including small camels called Stenomylus, dog-sized rhinoceroses known as Menoceras, and ‘bear dogs,’ such as the Daphoenodon, whose name means, evocatively, ‘blood-reeking tooth.’

“They were pretty incredible creatures,” said Caleb Prater, a park ranger at Nebraska’s Agate Fossil Beds National Monument, which sits on the land once owned by the rancher, James Cook. “Some were as big as woodchucks but probably lived in communities across the landscape like modern-day prairie dogs.”

Like those of many burrowing mammals today, Palaeocastors’ dens were fairly luxurious. Often as much as nine feet deep, the shelters had side chambers for sleeping and rearing young. Some of these excavated rooms contain low pockets that scientists believe were dedicated latrines or natural water-collecting “sinks” for drinking and bathing. Some chambers have steep inclines that kept sleeping Palaeocastors safe from flooding, evidence of a type of mid-summer hibernation called “estivation.”

But the Palaeocastor’s corkscrew chambers set it apart from all other known burrowing mammals, which generally tunnel straight down into the earth. University of Kansas professor Larry D. Martin examined more than a thousand fossilized Palaeocastor burrows in the 1970s and made some surprising discoveries, most notably that the scratches found on the walls weren’t from claws but from teeth. The ancient beaver used its long front incisors to dig its tight spirals, fixing its hind feet on the axis and, in Martin’s words, “literally screwed itself straight down into the ground.”

But why go to the trouble of digging spiraled burrows instead of straight ones? According to Prater, there are a couple of possibilities. The spiral perhaps made it easier to escape predators, which might be able to reach down into a straight burrow but not around a curve. Or it could have been easier for the Palaeocastor to push excavated dirt up a gently sloping spiral than a steeper straight burrow. Perhaps the spiral helped keep water out.

Those curious to see a Palaeocastor for themselves can visit Agate Fossil Beds and see its collection of fossils from the Oligocene and Miocene Epochs. A mile down the Daemonelix Trail, Paleocastor’s corkscrew burrows are still embedded in the side of ancient rock hillsides, just where James Cook found them in 1891.

Of course, only fossils remain—not even the descendants of the Palaeocastor are still living. “The entire lineage died out during the Oligocene Epoch when the world was changing,” said William Korth, an earth science professor at Nazareth College and an expert in ancient rodents. From 33 to 23 million years ago, the planet’s ecosystems cooled down and dried out, and a tropical world evolved into one dominated by grasslands. “Palaeocastors were probably adapted for a wetter world, and so when grasses and prairies came in, they just couldn’t hang on,” he said.

And that was that for the Palaeocastor, but fortunately, it wasn’t the end for all mammals of its kind. Diverse forms of grazing mammals continued to thrive on grassy savannahs, alongside a motley crew of meat-eating predators. Elsewhere, aquatic beavers did hang on and eventually became the flat-tailed dam builders we know today. And gophers and other rodents evolved and took over the underground niche previously occupied by Palaeocastors. None of them, however, has ever managed to get the hang of the corkscrew burrow.