My dad, St. Louis born and raised, vividly remembers watching the Gateway Arch rise above his city’s skyline half a century ago. During its construction in the early 1960s, he would sit in his bedroom window and peer through his father’s old Army field glasses, watching cranes lift pieces of the arch into place. Dad moved away after college, but our family goes back to St. Louis often, and I always look forward to catching my first glimpse of the arch as we drive into town. 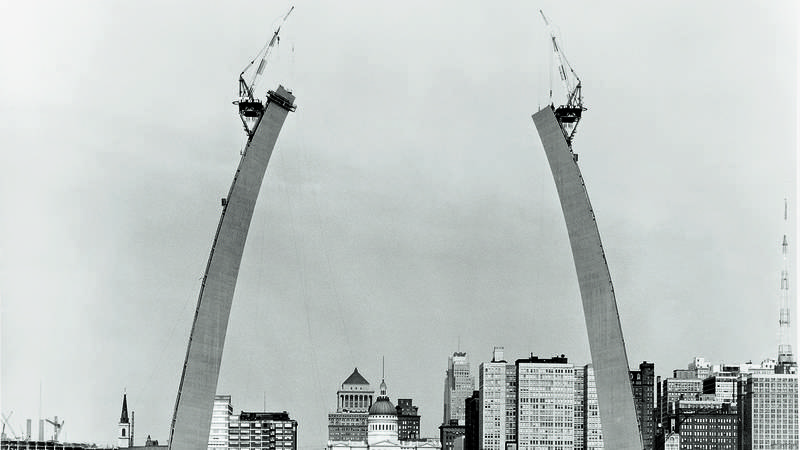 St. Louis’ Gateway Arch under construction in the 1960s.

One sunny afternoon last fall, my Dad and I went back to the arch for the first time since I was a kid. In the small crowd milling around its base, all cameras aimed toward the sky and all eyes traced up sharp edges that tapered together high above our heads. The arch seemed to change shape with every step as we drew closer to it, and the dull sheen of stainless steel stood out clean against the deep blue sky.

The Gateway Arch is the centerpiece of the Jefferson National Expansion Memorial, a 90-acre park along the Mississippi River in downtown St. Louis. A masterpiece of mid-century modernism designed by architect Eero Saarinen, the soaring monument is recognized as an expression of America’s rising confidence and ingenuity following World War II. The park also epitomizes the car-centric urban design ethos of its era: It’s bordered by a six-lane freeway and had its own parking garage onsite. But soon after the arch was finished, the promise of the automobile age gave way to a disappointing reality: St. Louis’ iconic monument was isolated from the rest of downtown. Now, 50 years later, the park is undergoing a $380 million renovation to make the arch a more welcoming destination.

St. Louis’s riverfront was once the beating heart of one of America’s largest cities, where barges moved people and goods between the crowded East and the beckoning West. But by the early 20th century, as barge traffic gave way to the railroads, the river’s vitality waned. In the 1930s, boosters hatched a plan they hoped would reinvigorate the riverfront and help bail the city out of the Great Depression. Led by lawyer Luther Ely Smith, St. Louis raised millions of dollars to build a riverfront monument dedicated to the city’s role as “Gateway to the West.” In 1935, the federal government acquired 40 square blocks along the river, and President Franklin D. Roosevelt designated the area a National Historic Site. Then, despite protest from some residents and preservationists, nearly every warehouse, apartment building, and home was razed to the ground.

This “grand scheme” approach to urban renewal wouldn’t fly today, said Jefferson National Expansion Memorial Superintendent Tom Bradley as we strolled under the arch, “but during the Depression, it was seen as a shot in the arm.” Nearby, an excavator turned up hunks of broken bricks and smashed tiles, the remnants of the buildings that once stood here.

After World War II, a competition to select the memorial’s design netted 172 entries. The jury’s selection of Saarinen’s self-supporting arch generated great excitement, but its $13 million price tag and battles over the railroad tracks on the site stymied the project. Meanwhile, the freeway opened, a sign of American progress that Saarinen heartily embraced. “In the ’50s and ’60s, for urban planners, highways were the wave of the future,” said Ryan McClure of CityArchRiver, a nonprofit that’s coordinating the renovation. “It was a totally different mindset.”

Every October 28, the Park Service welcomes back the iron workers, electricians, sheet-metal workers, draftsmen, engineers, and crane operators who worked on the arch. The builders share stories and photos from their time on the project and sign autographs for the public.

Construction on the arch began at last in 1963. For the next two years, cranes and “creeper derricks,” which crawled up the legs, hoisted 142 pre-assembled sections into place. The operation demanded extraordinary precision—if the builders had erred by more than a few centimeters, the arch’s legs would not have met.

On October 28, 1965, a whole city held its breath as crane operators lowered the final section into place. My dad, then 13, recalls his lessons coming to a stop. His teacher wheeled a TV into the room, and the class watched a live broadcast of the proceedings. With the keystone wedged in place, the arch stood fast, topping out at 630 feet, the tallest freestanding arch in the world.

Like all the St. Louisans I know, my dad is proud of the arch—its audacious size and graceful strength make it a universally recognized symbol of his hometown. But almost immediately, the park’s isolation from downtown became a problem. “For 50 years, people have been talking about how we can connect the arch to the city,” said Ryan McClure. Plans for restaurants, shopping, a theme park, and an aboveground museum came and went until 2009. That’s when the National Parks Conservation Association helped initiate another design competition, this time focused on the arch’s future. “The challenge we faced was to make the arch better, while staying true to that original vision,” said NPCA Midwest Regional Director Lynn McClure (not related to Ryan McClure).

One solution has come in the form of a new “cap” of parkland covering the freeway, which will create an uninterrupted greenway from downtown to the arch. When construction wraps up in 2017, the arch will be “physically connected to its city for the first time in its history,” said Ryan McClure. Five miles of new pathways will welcome wheelchair users and bicyclists, and an airy museum will replace the windowless, bunker-like entrance visitors pass through today. The parking garage is gone, too, and in its place visitors will soon find seven acres of lawns, a garden, and an amphitheater, all just steps away from a commuter rail stop.

“This has been called the worst entrance to any national park in America,” said Ryan McClure, shouting over midday traffic and the parade of rumbling dump trucks. “But not for long.”