Q: Popular culture often portrays national parks in striking and unusual ways. One Grammy Award-winning album of the year even featured a national park prominently on its cover. Can you name this album? Hint: This record took over the airwaves in 1987 and launched four European rockers to super-stardom.

#{image.caption}
The view depicted in a famous Grammy-winning album in 1987.   Photo © Todd Christopher/NPCA.

A: Producing two number one singles (“With or Without You” and “I Still Haven’t Found What I’m Looking For”) and with U.S. sales ultimately topping 10 million units, The Joshua Tree is the album that launched the Irish band U2 to rock super-stardom. Upon its release in March 1987, the album topped the charts, landed the band on the cover of Time magazine, launched a worldwide tour playing to 3 million people, and garnered wide critical acclaim. 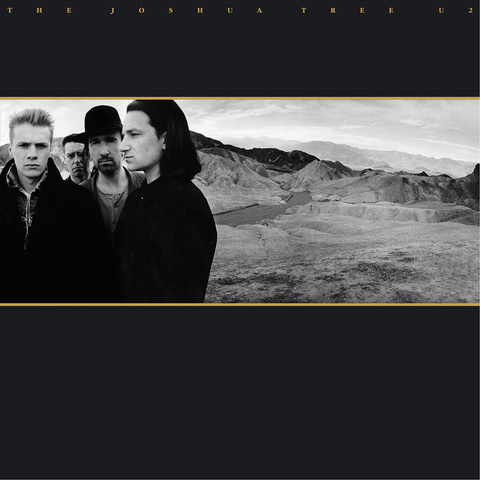 The songs on The Joshua Tree have a cinematic quality about them, calling to mind the open landscapes of the West (“Where the Streets Have No Name,” “In God’s Country,” “Bullet the Blue Sky”) and evoking the complexity and oftentimes stark contrasts that characterize the physical and spiritual makeup of America. They are by turns beautiful and harsh—and ultimately redemptive.

But that national park on the album cover? It might not be the one you think it is.

To express these themes visually, the band and its creative team embarked on a three-day photo shoot at various locations around California’s Mojave Desert. The now-famous album cover, shot in black and white, depicts the band huddled together while the expanse of Death Valley National Park fills the rest of the frame. Shot from Zabriskie Point, one of the park’s most popular vistas, the photo looks from the Amargosa Range to the Panamint Mountains in the distance, with the Manly Beacon rock formation just visible inside the right-hand margin.

The specimen that gives The Joshua Tree its title is featured on the album’s back cover and inside sleeve photographs, and has an interesting story in its own right. Its once-secretive location—mistakenly thought by many to be within Joshua Tree National Park—actually lies some 20 miles west of Panamint Springs, beyond Death Valley National Park’s western border, and has been something of a pilgrimage site for U2 fans over the years. Unfortunately, the iconic tree died in 2000, falling to the desert floor. Despite being vandalized in 2015, the fallen tree remains a draw for curious visitors who take photographs and leave makeshift rock art to commemorate this once-living piece of music history.

One particular offering at the site, however, is a bit more permanent—a plaque portraying the famous tree and asking a wry question inspired by one of The Joshua Tree’s biggest hit songs: “Have you found what you’re looking for?”