An NPCA membership is the perfect gift for all your park-loving friends and family!

Give the gift that helps protect your national parks all year long.

Your recipient will enjoy a year's subscription to National Parks magazine, plus our exclusive member luggage cubes.

Meet the Three People Least Impressed with the Grand Canyon

Not everyone is amazed by the grandeur of the Grand Canyon—but these three unimpressed girls made one NPCA staffer love the park even more.

The Grand Canyon is a jaw-dropping place. Unless you’re a six-year-old.

At that age, you’re interested in bugs and boogers, stuffed animals and Starburst candy. Pretty much everything in life is bigger than you, except for maybe your little sister. So the canyon that your parents drove hours to visit becomes just another large thing in your small world.

You don’t care that it’s millennia old or 277 miles long. Or, that parts of it were formed underneath a great sea when North America as a landform didn’t exist. You’re six. You care that your sister stole your LeapFrog learning tablet.

Last week, I flew out to Arizona to meet my brother, his wife, and their three young daughters—ages 6, 5, and 2—as they traveled from the red rocks of Sedona to Grand Canyon National Park.

It had been several months since my last visit, which in kid years means I’d missed a lot. Teeth had been lost, reading had advanced to chapter books, and the terrible twos had begun. These older versions of my nieces charmed me with their innocence while their non-stop curiosity and distinct personalities floored me. Want to hear three dozen cow jokes? I know just the girl to ask.

My brother, sister-in-law, and I had hoped the girls would “ooh” and “aah” over the canyon. We knew it probably wouldn’t capture their attention for long, but it’s a big place. We thought it would earn a moment of silent appreciation. We were wrong. 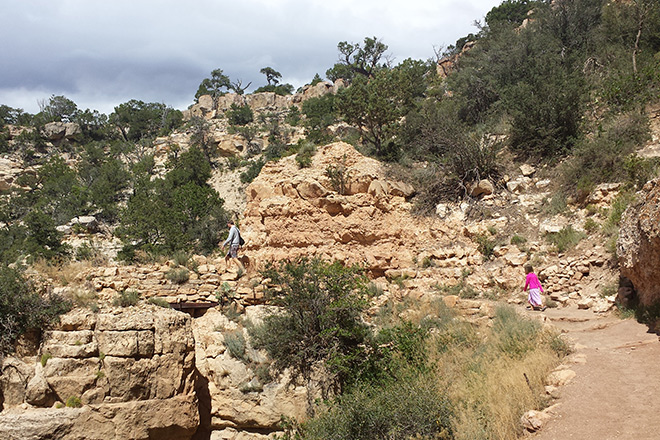 What my nieces did find exciting were the small moments and mini-miracles of everyday nature. A baby squirrel approached us along the path near the visitor center, and the girls declared it their favorite thing from day one. They turned handrails and decorative rock walls into their own personal jungle gym, swinging and hanging, balancing and jumping. On their brief hike into the canyon, rather than looking up and out, they looked down and pondered the grass-filled dung left behind by a guided mule tour.

Later, during our shuttle ride west along the South Rim where striking views surprised us adults at every turn, my nieces’ primary concern was getting back to the Maswik Lodge where they were staying, so they could continue exploring their “backyard.”

At the lodge, they were content to clamber around in their dusty sundresses, climbing downed trees, collecting stones, and chasing lizards. With nothing more to appeal to their senses than a pine-scented patch of dirt, their imaginations ran free. Small pebbles became “powers,” standing water pipes became microphones, and gnarled trees became forts.

Watching them play with abandon beneath the cloudless ceiling of a western sky reignited a sense of wonder I thought I had long since lost.

Driving back from Grandview Point on our last evening, the day had reached the “magic hour.” Dusk settled softly around us, lengthening the shadows and cooling the air. Having rested much of the day, animals stirred, and the forest came alive. We saw no fewer than 20 elk on that short drive, including a cow and her two spotted calves, and even caught a glimpse of a tawny-coated coyote loping off into the pine trees.

Day continued its flawless transition to night as we made our way to my campsite for that time-honored tradition of fire building and s’mores making. Unlike the others, I had foregone the lodge, preferring to pitch a tent at a peaceful site lined with fragrant trees and arranged around a picnic table and fire pit. My campsite came in handy on this night, as the girls scampered to and fro collecting pine cones for starter fuel, while their father and I arranged the wood and kindling and struck a few matches. The girls would dart forward to toss their contributions into the flames before retreating into the cool darkness just beyond the fire-warmed air. Cautiously, they circled the glowing, popping logs. Fear and fascination warred on their faces as smoke swept through their hair.

After receiving some instruction in the basics of marshmallow roasting, the girls settled down to their task. Despite their studied concentration, more than a few marshmallows met a crispy end at their inexperienced hands, but oh, to see the joy on their faces as they experienced this rite of passage. Chocolate melted along their lips and marshmallow fluff dangled from their fingers and down their chins, prompting the middle child to ask if she looked like Santa with his white beard.

A little later, after we had demolished nearly an entire bag of marshmallows, I shared my headlamp with the girls, who immediately began to make shadow puppets on the wall of my tent. There was a mangled sheep, an accomplished alligator, and a few indistinct blobs. Peals of their bright laughter filled the air.

The fire died down to smoldering coals as our conversation lulled and became peppered with yawns. With a sleepy girl snuggled alongside each adult, we all sat back and stared at the stars scattered in the inky dark. It had been too long since any of us had gazed at a sky like this. We looked for the Big Dipper and for planets, for the North Star and for shooting stars. It was a beautiful moment, and the absolute perfect way to end our time in the park.

Perhaps as they get older, my nieces will only remember our trip to the Grand Canyon through the pictures we took. Some might argue that we didn’t need to travel so far to visit a place that failed to adequately impress them, but in the end—and all along the way—they had a wonder-filled time. They smelled the vanilla of Ponderosa pine tree bark and heard the garrulous caws of blue-black ravens. They climbed on rocks, picked up feathers, and touched flowers. They felt the energy and tension of a quick-moving desert thunderstorm and received the brief blessing of rain in a parched landscape.

Through it all, even as the beauty of that iconic canyon passed somewhere beneath their notice, they managed to share a little of the grace of childhood with their aunt.