400 Years of History at Risk

Dominion Virginia Power seeks to build a 500-kilovolt power line directly through this unmarred section of the James River, using 17 towers that would each be nearly as tall as the Statue of Liberty.

Walking along the James River at Jamestown, reflections of a blue sky shine brightly on the pristine water, and it’s easy to imagine history unfolding along the sandy beach. The area’s unspoiled views are reminiscent of a different time, one where the hum of traffic is replaced by birdsong and babbling waters.

Four hundred years ago, English explorer John Smith navigated his ship through these same waters, set foot on what is now Virginia, and established the first permanent English settlement on the continent. To visit this richly historic setting today is to experience the virtually unchanged view just as Captain John Smith did in 1607.

Today, this site at Jamestown faces a stark threat. Dominion Virginia Power seeks to build a 500-kilovolt power line directly through this unmarred section of the James River, using 17 towers that would each be nearly as tall as the Statue of Liberty. These towers would be lit day and night, introducing light pollution and a chronic eyesore to this picturesque vista. This project, if built, would industrialize this historic landscape and degrade several national park sites, including Colonial National Historical Park and the Captain John Smith Chesapeake National Historic Trail.

There’s more at stake than the remarkable views. Dominion’s towering transmission line would also disturb and degrade habitat of the Atlantic sturgeon, a federally endangered species that is among the oldest fish on Earth. Several other species would be threatened as well, including the American bald eagle and the small whorled pogonia, a rare orchid with a crescendo of five leaves at its top. And anything that can do so much damage to the plants, animals, and character of this region poses a serious risk to the area’s $1 billion annual tourism industry. More than 3 million visitors to Colonial National Historical Park spent $174 million in 2014 alone, contributing to nearly 2,500 jobs. 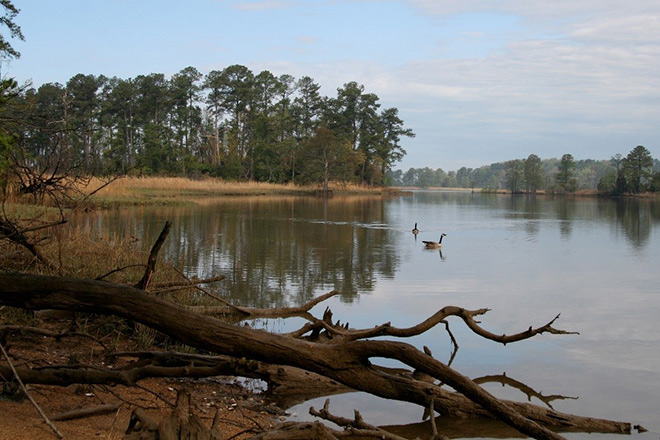 A current view of the James River, remarkably close to how Captain John Smith would have seen it. National Park Service photo.

The U.S. Army Corps of Engineers must approve a permit request by Dominion for this project to move forward. Tens of thousands of park advocates have already voiced their opposition to this massive transmission line across Jamestown’s historic setting. At a minimum, the Army Corps should require Dominion Virginia Power to conduct a full evaluation of the environmental impacts that would result from this project and analyze reasonable alternatives before making a decision on Dominion’s permit application.

To date, no one has accounted for the public costs of degrading historic Jamestown or explored reasonable alternatives to provide electricity to the region. Other options for siting the power line should be analyzed and considered by the public before a decision is made. Sacrificing one of America’s most treasured places should be the last option, not the first.

The U.S. Army Corps of Engineers must require Dominion Virginia Power to complete an environmental impact statement and only allow siting options that protect our national parks and historic sites for our children and grandchildren.