Alaska is home to nearly two-thirds of the land in the entire National Park System — some 54 million acres in all. But only four U.S. national park sites lie entirely north of the Arctic Circle.

Clouds over the sand dunes at Kobuk Valley National Park, one of four national parks in Alaska that lie entirely within the Arctic Circle. 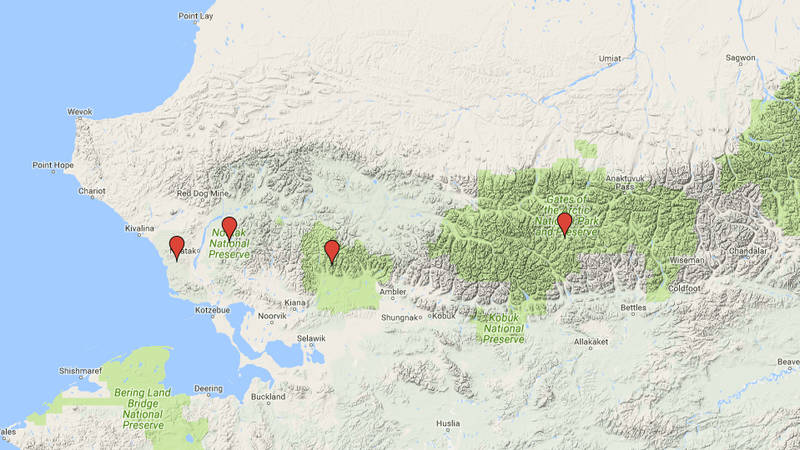 See a map of four national park sites in Alaska that are located above the Arctic Circle.

The Arctic Circle is the northernmost region of the globe, located above the latitude at which the sun doesn’t set for a complete day during the summer solstice or rise for a complete day during the winter solstice. In the U.S., four national parks lie entirely within this region: Cape Krusenstern National Monument, Gates of the Arctic National Park and Preserve, Kobuk Valley National Park, and Noatak National Preserve.

Together, these parks cover more than 26,000 of the wildest square miles in the United States. They offer remote, intact ecosystems and capture the extremes of daylight and darkness that the Land of the Midnight Sun is famous for.

Here’s a brief tour of these untamed destinations in Alaska’s Far North.

Gates of the Arctic National Park and Preserve

A view of Kuyuktuvuk creek at Gates of the Arctic National Park and Preserve.

Roughly four times larger than Yellowstone National Park, Gates of the Arctic National Park and Preserve is a land of glaciated valleys, scenic rivers and tundra straddling the country’s northernmost mountain range, the Brooks Range. Two large peaks, Boreal Mountain and Frigid Crags, stand on either side of the north fork of the Koyukuk River and form the literal “gates” in the park’s name. Though relatively few people visit this wilderness park, it is prime habitat for five of Alaska’s most charismatic wildlife species: grizzly bears, moose, caribou, wolves and Dall sheep.

An aerial view of colorful tundra and mountains at Noatak National Preserve.

Bordering Gates of the Arctic directly to the west, Noatak National Preserve protects the largest untouched mountain-ringed river basin in the country. Most of the Wild and Scenic Noatak River flows within the preserve’s boundaries, providing excellent opportunities to see wildlife, including the Alaska’s largest caribou herd. More than 300,000 caribou in this Western Arctic Herd migrate north each spring and south each fall across the tundra in search of food.

Just south of Noatak, Kobuk Valley National Park sits between two mountain ranges, the Baird Mountains to the north and the Waring Mountains to the south. The slow-moving Kobuk River meanders for 61 miles on the southern end of the park, where visitors plan float trips in the warmer months. This park offers another, particularly curious natural feature: enormous sand dunes more than 10 stories high that make this region of the Arctic look similar to a desert.

To the west of these three parks, Cape Krusenstern National Monument encompasses the coastal plains and lagoons that border the Chukchi Sea and Kotzebue Sound. The park is perhaps best known for its archaeological riches. The monument preserves more than 5,000 years’ worth of prehistoric and historic Alaska Native artifacts from every known period of Arctic occupation, including campsites, house ruins, burial grounds, stone tools, pottery, and hunting and whaling implements.

Learn more about issues facing Alaskan national park sites, including NPCA’s work with Alaska Native communities to protect these wild lands and the health of the Western Arctic Caribou Herd from a proposed mining road.