Without enough water to go around, federal agencies and advocates weigh competing needs of people and threatened fish.

The Glen Canyon Dam in Arizona

The Colorado River provides drinking water and hydropower to more than 40 million people in the Southwest — but more water has been parceled out among its many users than actually exists in the river. As climate change has exacerbated severe drought conditions in the region, water shortages worsened to a crisis point this past year, forcing widespread rationing and bringing unforeseen consequences. Low levels now threaten the everyday water and power use of residents across seven states and numerous Tribal lands — as well as the survival of the humpback chub, a recovering species that once represented a wildlife success story.

There is no easy solution to reverse the water shortages in this critical river system, but federal agencies are taking first steps to address some of the worst effects of the crisis, and advocates are pushing for innovative new strategies to rethink water use for the long term.

The Colorado River feeds the two largest reservoirs in the country — Lake Powell and Lake Mead, two national park sites that generate hydropower for millions of people. This year, after more than 22 years of drought, researchers documented the lowest water levels ever seen at both reservoirs. Over the summer, Lake Mead fell to below 27% of its capacity. Lake Powell is currently at less than 24% of its capacity, with water only 38 feet above the minimum level needed to generate hydropower. 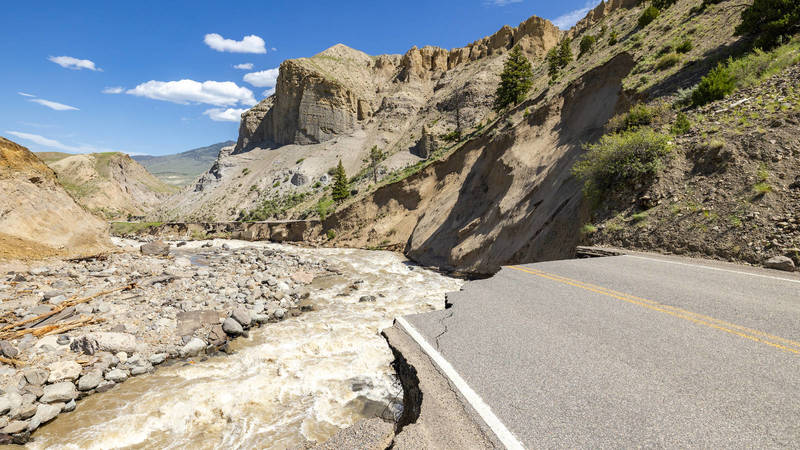 A Disastrous Time for National Parks: Congress Must Act Fast To Rebuild Them Stronger

In recent years, we’ve witnessed record floods, severe and more frequent storms and hurricanes destroy communities, shutting down businesses and ripping through our parks and the landscapes, wildlife and life-changing…

If the dam becomes unable to produce electricity, millions of users would be affected. And if the water level continues to drop, Lake Powell could reach “dead pool” status in the foreseeable future — a state in which the water level falls below the lowest bypass tunnels and is unable to continue downstream. Without extraordinary and untested engineering, this would create an unthinkable and devastating scenario where there is no water flowing through the bottom of the Grand Canyon immediately downstream. A recent Washington Post story shares more detail on what this could entail and offers different predictions over whether this “doomsday scenario” is likely to happen within the next one to five years.

The Milky Way over Lake Mead, as seen from Stewarts Point.

These dire shortages have not just negatively affected recreation and led to water restrictions for users, but also caused warmer water to get through the dam as the water levels drop, affecting river ecology downstream. These higher temperatures have allowed an aggressive predatory fish, the smallmouth bass, to slip through the Glen Canyon Dam’s turbine system and survive downstream of Lake Powell, where it now poses a direct and immediate threat to the humpback chub within the Grand Canyon.

The chub had previously been listed as federally endangered and was downlisted to threatened in 2021 due to the successful recovery efforts of National Park Service and other federal agencies. A success story until last year, the chub’s future is again uncertain.

It is the duty of Park Service staff to manage park resources in a way that protects the river and its wildlife. According to Rob Billerbeck, Colorado River coordinator for the National Park Service, the agency is taking measures to address the problem, but much more is needed.

“We need a multi-agency rapid response to happen relatively quickly,” said Billerbeck. “Part of that is having the National Park Service get some funding to conduct that rapid response, but also having some partners respond, like Arizona Game and Fish, to find and remove these fish where they are located.”

A humpback chub from the Upper Colorado River.

In September, Park Service staff began using a targeted poison to kill invasive fish downstream of the dam. The move could help the chub survive in the short term, but the measure does not address the root cause of the problem and is unlikely to help the humpback chub recover over the long-term. The measure is also objectionable to members of some area Tribes, such as the Pueblo of Zuni, who oppose the killing of aquatic life.

Earlier this fall, the Bureau of Reclamation, the federal agency that operates the Glen Canyon Dam, announced it was considering a “high-flow experiment.” In a high-flow experiment, operators release large amounts of water through the dam for an extended period — up to several days — bringing down the water temperature and moving sediment within the Grand Canyon to restore beaches along the river.

The Colorado River near Glen Canyon Dam in Arizona

This would undoubtedly improve conditions for native species while creating less favorable conditions for the smallmouth bass that thrive at warmer temperatures. And, it would help maintain the rare beaches where river runners camp.

But with the reservoir critically low and barely able to sustain hydropower, releasing that much water was unrealistic, and the bureau ultimately did not follow through on the plan.

Glen Canyon Dam ruined the ecological stability of the canyon.

Advocates such as Sinjin Eberle, communications director at American Rivers, had been urging the bureau to conduct high-flow experiments in 2021, when monsoons made conditions along the river more favorable.

However, the bureau opted not to move forward because of low lake levels at that time. Eberle emphasizes that we need to do anything we can to keep the lake levels higher, including investing in better technology.

“Glen Canyon Dam ruined the ecological stability of the canyon,” he said, adding that the entire society of the Southwest is now structured around these two reservoirs. Although water shortages have persisted for years, 2022 is the year “the bottom really fell out of the system,” he said.

“We’re facing more than 20 years of drought. We’ve been withdrawing more water from Lake Powell and Lake Mead, using 14 million and only getting about 13 million back in the system,” said Billerbeck, referring to the number of acre-feet that are taken from the reservoirs and replenished by runoff each year. (An acre-foot is the volume required to cover an acre of land with a foot of water).

Butte On The Water 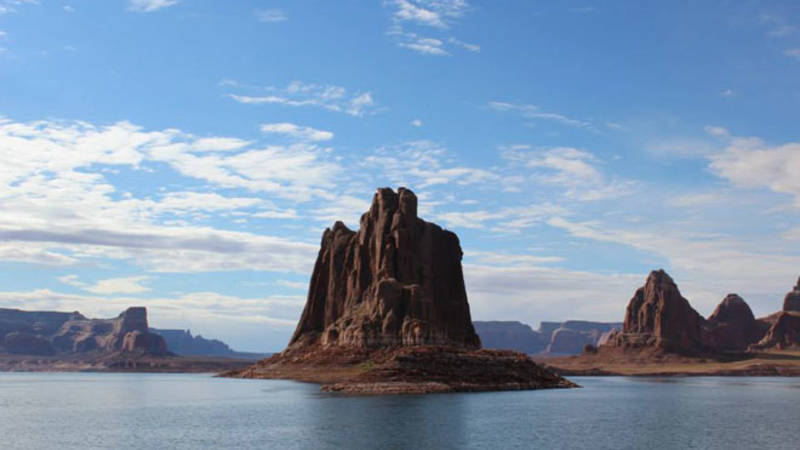 Billerbeck emphasizes that usage should stay within 10 or 11 million acre-feet — both to help native fish survive and to avoid taking these reservoirs to dead pool, where they can no longer support the people who need them.

The bureau has already called on states to reduce water use by 2 to 4 million acre-feet a year and could enforce these cutbacks by releasing significantly less water from the dam in coming years to keep the levels higher at Lake Powell.

‘The most predictable disaster of all time’

It’s clear we cannot continue to use the Colorado River as though it is an unlimited resource, and continued drought will eventually dry up both reservoirs if people do not make significant changes to the way they manage and use the area’s water.

For the past 100 years, water use has been governed by the Colorado River Compact, an agreement made in November 1922 about how to divide water rights among seven Colorado Basin states — Arizona, California, Colorado, Nevada, New Mexico, Utah and Wyoming. The agreement was brokered between white landowners at a time when water was more abundant, and even then, it greatly overestimated the average capacity of the river, leading to a system where more has been taken out of the river year after year than can naturally be replenished. The effects of this agreement have been piling up for a century, and now we are seeing the consequences.

The agreement was brokered between white landowners at a time when water was more abundant, and even then, it greatly overestimated the average capacity of the river, leading to a system where more has been taken out of the river year after year than can naturally be replenished.

Some experts advocate for more extreme measures than conservation alone, such as abolishing the Glen Canyon Dam altogether and using its water to fill Lake Mead, an effort known as “Fill Mead First.” According to Jack Schmidt, director of the Center for Colorado River Studies at Utah State University and a member of NPCA’s Southwest Regional Advisory Council, combining the two failing reservoirs into one fuller water source could reduce water loss from evaporation and seepage and would allow the ecology of Glen Canyon to rebound from the effects of the dam.

One proponent, Eric Balken of the Glen Canyon Institute, believes this option must remain on the table, and that we must consider “how to optimize and how to completely phase out the reservoir.” He calls the crisis at Lake Powell “the most predictable disaster of all time” and wants to see the issue of how to store and use Colorado River water addressed in a more holistic way that prioritizes the environment and involves greater say from members of area Tribes.

NPCA has supported coalition efforts urging Congress to conduct emergency studies of the Glen Canyon Dam and for the Biden administration to address drought conditions in the West, including the Colorado River crisis. We simply need better information to make better decisions, but we cannot continue the way we have been for the past 100 years.

An opportunity for transformation

Every crisis is an opportunity for transformation. The water shortage in the West is only worsening, and water levels will continue to drop if nothing is done to bring the system into balance, eventually turning the Glen Canyon Dam into an irrelevant obstruction. 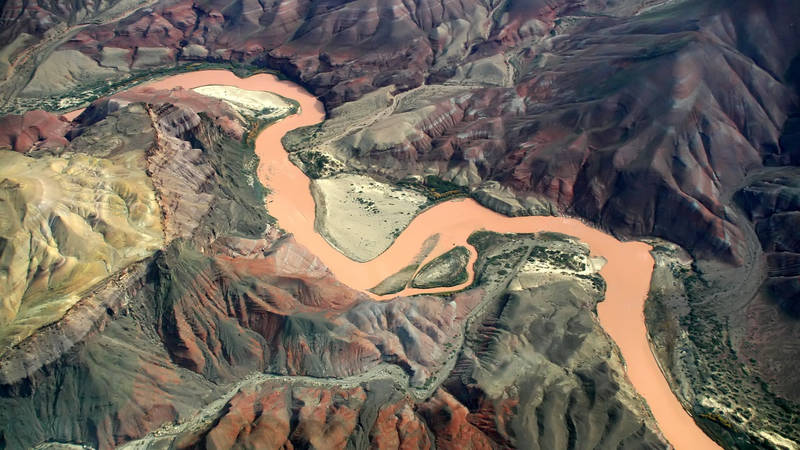 An aerial view of the Colorado River twisting through the Grand Canyon.

NPCA recommends more research into ways to get water to flow into the Grand Canyon if the dam reaches dead pool status — and we need to come up with viable options now, before it’s too late.

Whatever the fate of Glen Canyon Dam, the lack of action from the Bureau of Reclamation is threatening not only native fish such as the humpback chub, but also the health of the Colorado River and the Grand Canyon’s ecosystem. The bureau has a legal obligation to protect threatened and endangered species, and its lack of action could be a direct violation of the Grand Canyon Protection Act of 1992, which specifically states that the Glen Canyon Dam should operate in a manner that protects and improves the Grand Canyon’s natural and cultural resources. 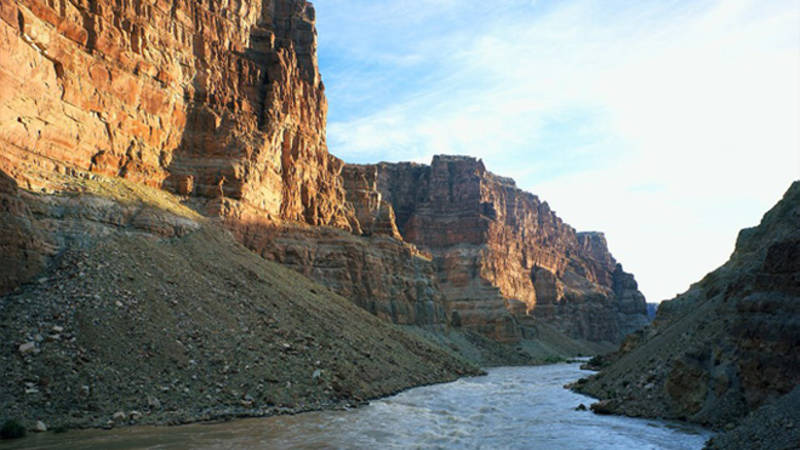 If the seven basin states are unable to develop realistic contingencies to use less water, which they have consistently failed to do, the federal government will need to enforce sharper restrictions. We’ve simply taken more out of the system than what nature has been able to put back in, and 100 years later, the results haunt us. We need to reckon with the past while creating a new relationship with the Colorado River — it is the lifeblood of much of the West, and we must move forward with greater wisdom and care or lose everything it represents to us.