Why Stonewall Matters Now More Than Ever

As inflammatory rhetoric and even violence against LGBTQ people accelerate, Stonewall National Monument in New York remains a powerful symbol of the community’s resilience and permanence.

“A homosexual bar is NOT a national park.” That’s all the email said.

It was a terse reply to a long message NPCA had sent members and supporters about newer national park sites that teach visitors about diverse American history, including Stonewall National Monument. President Barack Obama designated Stonewall in the summer of 2016, turning Christopher Street Park into the first national park site dedicated to LGBTQ history in America.

The Stonewall Inn is a gay bar on Christopher Street, a historic LGBTQ neighborhood in the Manhattan borough of New York. In 1969, Stonewall provided a place for queer people to meet, drink and dance, but it was also a constant target of abuse by police raids and shakedowns. Police deliberately targeted people who were not conforming to rigid gender and sexuality norms, arresting Stonewall patrons for the crime of wearing fewer than three articles of clothing that matched their sex — whatever “matched their sex” means. 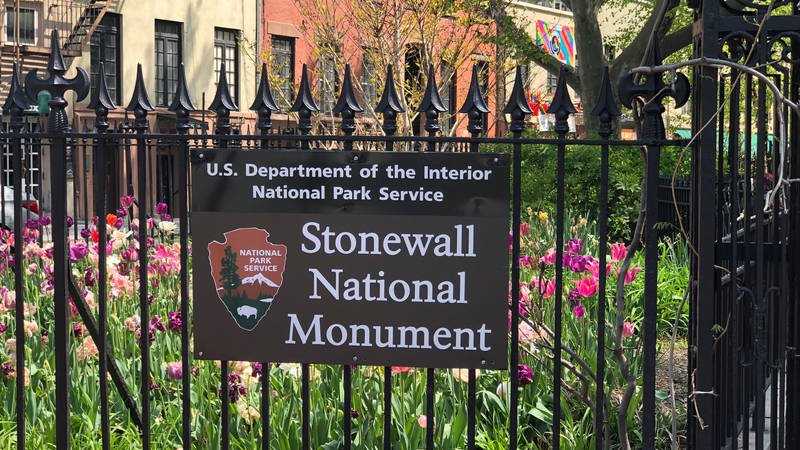 Flowers bloom at Christopher Park with the Stonewall Inn in the background. Both locations are part of the national monument.

One night, during yet another brutal police raid, the people of Christopher Street had had enough. A crowd swelled as police hauled customers and staff out of the bar in handcuffs. Exact accounts of the evening vary, but many witnesses remember a lesbian Stonewall patron being roughed up and beaten with a baton. She turned to the crowd of onlookers and shouted something to the effect of, “Why don’t you guys do something?” 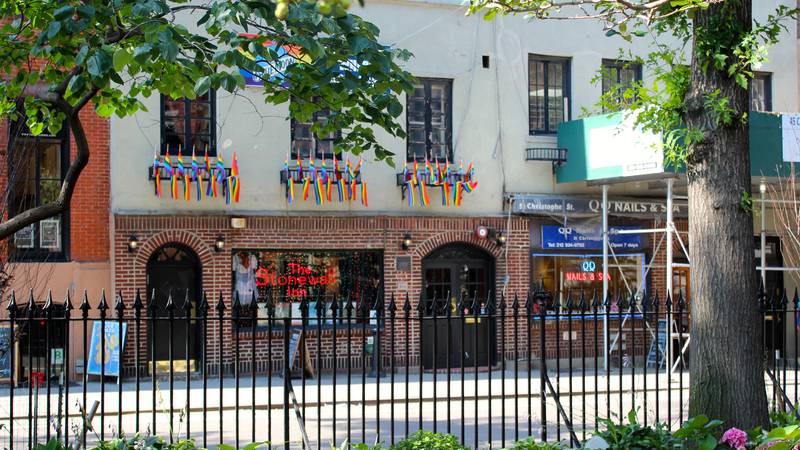 A National Park for Stonewall: FAQs

The Stonewall legacy is a part of the push for human rights and civil rights in the United States.

And they did. Tired of being pushed around, the LGBTQ people of this neighborhood fought back, turning what the police thought would be yet another routine raid of the fairy bar into a full-scale riot. The riots lasted several more nights and marked a historic new beginning for the LGBTQ rights movement. The time for action was now, and the time for meekness and dejected acceptance of abuse was over. Today, I have rights that my LGBTQ forebears could only dream of: the right to marry the person I love, the right (in many places) to be protected from discrimination. So much of it can be traced back to this one night at Stonewall.

I admit it stings that despite the history nestled in this little New York City neighborhood, despite the enormous impact this place had on generations of people, someone was bothered enough by Stonewall’s inclusion on a list of national park sites to take the time out of their day to tell NPCA: “A homosexual bar is NOT a national park.”

Maybe laughing at that email was my defense mechanism for dealing with a terrifying truth, the reality that every LGBTQ person has grappled with at least once: some people hate us.

But I tried to laugh it off, because on some level it seemed silly to me that someone would get so worked up like that about Stonewall or the LGBTQ rights movement in this day and age. What he said is also objectively untrue — the Stonewall Inn bar is literally in the interpretative boundary of the first national park dedicated to queer history. So, who cares, anyway?

I laughed. I forgot about it. Then, a few weeks later, I woke up to news that made my blood run cold. A gunman had stormed Club Q, a bar popular with LGBTQ customers in Colorado Springs. Five people were dead, many more wounded. Suddenly, it wasn’t so funny anymore. Maybe laughing at that email was my defense mechanism for dealing with a terrifying truth, the reality that every LGBTQ person has grappled with at least once: some people hate us.

Some people viscerally despise us, our everyday lives, our history, the impacts that we have had and continue to have on culture. They hate our voices, our symbols, our art, our music … and they hate our places. Our bars, our community centers, our houses of faith, our streets and yes, even our one national park site.

I’m not putting any of that on this one person’s remark, to be absolutely clear. But these days, queer people are on high alert about anything people say to them about their identity, and for good reason. In the last couple of years, we have borne witness to a dramatic backsliding of LGBTQ safety. Dangerous rhetoric has led to armed confrontations outside drag shows at bars, community centers, even public libraries. Books that tell affirming stories with queer characters or aim to teach readers how to treat others with respect have been yanked from school shelves.

This park was designated to teach people that, love us or hate us, LGBTQ people are part of the fabric of American history.

Bullies always target the most vulnerable among us, so it is no surprise that they have made trans and gender-nonconforming people a prime target of this hatred and violence. Parents of transgender children are subject to relentless scrutiny and vitriol, online and offline — and not just by Internet trolls, but also by public officials and government entities. And while it’s too early to form detailed conclusions about the exact motives behind the Club Q shooting, violence against LGBTQ people is undoubtedly on the rise.

As gay columnist Dan Savage wrote on Twitter following the massacre, “People who hate queer people want us to keep it private. Behind closed doors. Someplace they don’t have to see it. And the doors of a gay bar are doors we keep it behind. A place we can go and be together and not bother ٭them٭ with the fact of our existence.”

But, Savage goes on to say, “An attack like this says ‘not even here.’ Behind closed doors isn’t good enough for ٭them.٭ It’s not that they want us to exist out of sight. They don’t want us to exist at all.”

To me, a queer person, that’s objectively terrifying. But it shows why Stonewall National Monument matters now more than ever. As attacks on queer people accelerate, Stonewall is a powerful symbol of LGBTQ resilience and permanence. The government of the United States took bold action to bestow the highest level of protection possible to the story of LGBTQ people’s greatest uprising yet.

Stonewall is a beacon of hope, a reminder to queer people everywhere to be strong and stand up for themselves every day.

This national monument was not created because every American agrees with the tactics or even the goals of the people at Stonewall and the subsequent LGBTQ rights movement — if we were waiting for that, we might never get a park dedicated to our history. Instead, this park was designated to teach people that, love us or hate us, LGBTQ people are part of the fabric of American history. We fought back when powerful forces tried to keep us down. We made history. And no amount of backlash, from inflammatory rhetoric to literal violence, can take that from us. 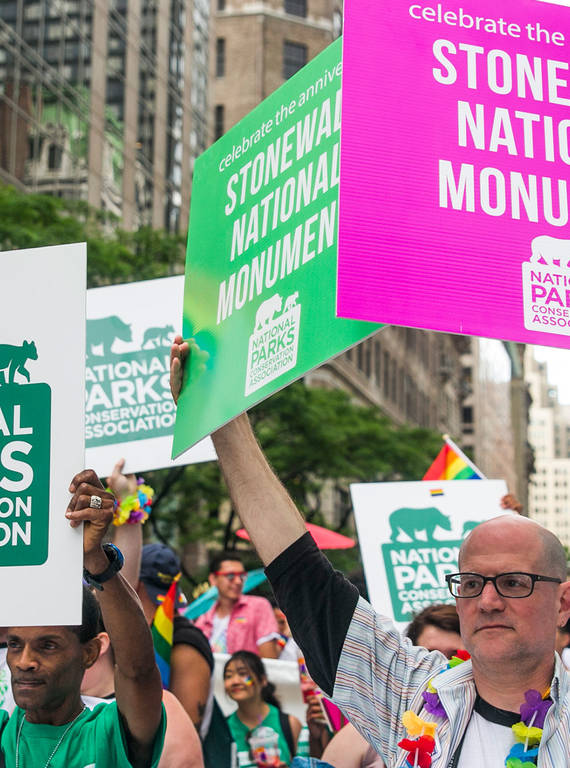 The attack at Club Q rattled me, but it won’t keep me and my friends out of our bars. It won’t keep me from being loudly, proudly queer at work, in our national parks, or a place like Club Q. We belong there. We have the right to be there, exactly as we are. Anytime I start to doubt that, I remember that at one of America’s national parks, people fought to defend that right for future generations. As long as I keep that in mind, there is not a force powerful enough on Earth to expel me from the places I deserve to be.

Stonewall matters now more than ever. Stonewall is a beacon of hope, a reminder to queer people everywhere to be strong and stand up for themselves every day. The people of Christopher Street did not give up, and neither should we. A homosexual bar is, in fact, a national park — part of its story, anyway. It’s not going anywhere – and neither are we.