Why Returning Grizzlies to the North Cascades Is a Great Idea

In a major move for national parks wildlife conservation, the National Park Service and U.S. Fish and Wildlife Service has initiated a new, multi-year process to evaluate options for restoring and managing grizzly bears in North Cascades National Park and the surrounding landscape of Washington state. Grizzlies once thrived here before mismanagement pushed the population into decline. The last grizzly confirmed in the park was over two decades ago.

The new environmental review process will identify ways to support the bears’ recovery and manage bears in collaboration with surrounding communities. A previous process to explore restoring grizzlies to the region was halted by the last presidential administration in 2020, despite overwhelming public support to bring bears back to the North Cascades. The November announcement marks the start of a completely new process to evaluate alternatives, with a public comment period that lasts through Dec. 14.

2. This would be a major step in restoring the species across its historic range.

The North Cascades National Park is incomplete without the grizzly bear. Wherever they thrive, so does wildness, clean water, and abundant native fish and wildlife.

Since 1975, grizzly bears have been listed as “threatened” under the Endangered Species Act. Despite recommending species augmentation for the North Cascades population in 1997, the Park Service did not have the resources to move forward with their plans. Now the agencies have the resources and expertise to make this vision a reality, while addressing local community concerns.

3. Grizzlies provide ecological benefits and will improve the ecosystem’s health.

Where grizzlies thrive, ecosystems thrive. These bears regulate healthy populations of the animals they prey on and keep forests healthy by dispersing seeds and berries. In addition, they are expert diggers — their massive claws help aerate soils to facilitate wildflower growth. As grizzlies churn the soil, they create seed beds for flowering plants and grasses, and prevent conifer encroachment on both alpine and subalpine meadows. 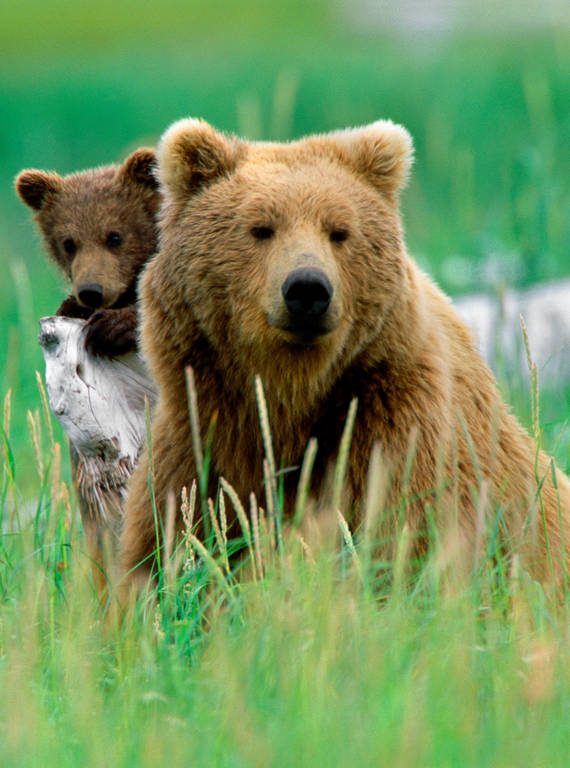 A grizzly and her cub in Alaska.

Additionally, the population of bears on the Canadian side of the North Cascades ecosystem is considered critically endangered, and wildlife biologists do not believe a natural recovery is possible. Reintroducing bears on the U.S. side will complement significant efforts led by First Nations in Canada to bring back this sacred cultural species.

4. We’re giving grizzlies their home back — and people want that.

Grizzly bears roamed across the North Cascades for thousands of years as an essential part of the ecosystem. In the 20th century, however, people hunted, trapped and poisoned them to near extinction. According to the Park Service, the last confirmed sighting of a grizzly bear in the U.S. portion of the North Cascades Ecosystem was in 1996.

When a similar review process began in 2015, it received overwhelming public approval, with more than 159,000 public comments supporting restoration of grizzlies in the North Cascades. People from all 50 states spoke up in favor of returning grizzlies to their historic habitat. Grizzlies are one of the slowest reproducing land mammals in North America, so the sooner we begin supporting their repopulation, the better chance they have for long-term survival.

5. The public process includes new tools to reduce the potential for conflict with local landowners and communities.

The latest review process will explore giving grizzlies a 10(j) experimental population designation. According to the U.S. Fish and Wildlife Service, this designation for reintroduction of a species offers flexible, less restrictive management by authorities and landowners — benefiting people, property and bears.

For example, landowners may not be required to consult with the U.S. Fish and Wildlife Service as they manage lands that include grizzly bear habitat. The “experimental population” designation has been used successfully before in reintroducing species to their native habitats, such as the whooping crane in Florida and Louisiana and the gray wolf in New Mexico and Arizona.

This is a first step toward bringing balance back to the ecosystem and restoring a piece of the Pacific Northwest’s natural and cultural heritage.

In summary, “This is a first step toward bringing balance back to the ecosystem and restoring a piece of the Pacific Northwest’s natural and cultural heritage,” Superintendent Don Striker of North Cascades National Park said in a November news release. “With the public’s help, we will evaluate a list of options to determine the best path forward.”

Gordon Congdon, a retired fruit orchardist and past director of the Chelan-Douglass Land Trust, agrees. His family has lived near the national park for three generations.

“We’re cautiously optimistic that this process will lead to a decision on how to successfully restore grizzly bears to the North Cascades through sound science and robust public involvement,” said Congdon, who has been interested in land and wildlife conservation throughout his life. “There’s a lot of interest from folks all over the state and the country because the grizzly bear is such an important, iconic and charismatic animal and it’s the only native large mammal absent from our wild lands.”

NPCA, too, is hopeful that this public process will lead to the restoration of grizzlies in North Cascades National Park. It is an opportunity to make progress for wild places — to restore the last missing piece of the park and the broader ecosystem.