Meet the two young donors who turn their birthdays into celebrations for their favorite national parks.

Remember when you were young and asked all of your friends not to bring gifts to your birthday party? Odds are you don’t, because to most grade-schoolers, forgoing presents is an almost unthinkable sacrifice.

That’s not the case for two California brothers, Owen and Zach Brunner, age 10 and 7 respectively. Owen started a tradition of requesting donations instead of birthday gifts and has raised hundreds of dollars for the Yosemite Conservancy over the last five years. Meanwhile, Zach followed in the footsteps of his older brother and has used his last three birthdays as opportunities to raise money for the Lassen Park Foundation, which supports Lassen Volcanic National Park in northern California.

I recently had the opportunity to meet these two inspiring boys and join them on a hike at Point Reyes National Seashore with their mother, Sonia. I asked them a few questions about their generous ritual and what motivates them year after year to keep giving when most kids would be focused on receiving. 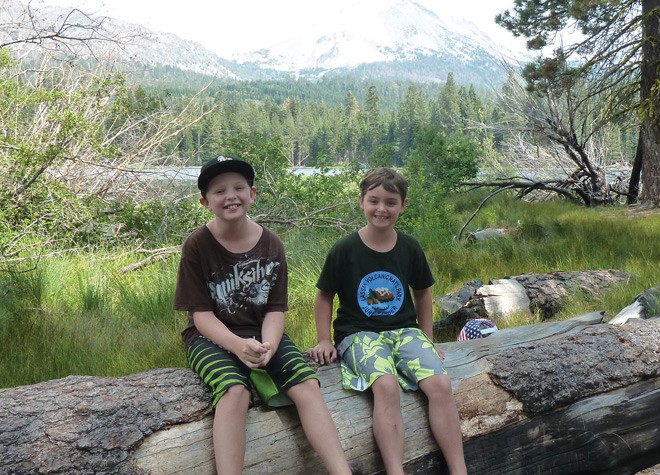 Q: Owen, what was your initial motivation to donate to the Yosemite Conservancy?

Owen: Well, I went to Yosemite for the first time when I was five years old and it was the best time I had in my entire life. We went in the winter and my dad took me outside at night to see the moon and the stars over Half Dome. I climbed boulders, and I watched El Capitan through the snow. So I told my parents that I wanted to donate my birthday money to the park instead of getting presents. They thought that was a really great idea and I’ve been donating to them ever since.

Q: Zach, how did you decide to give to the Lassen Park Foundation?

Zach: When I turned five, my parents told me that if I wanted to have a birthday party with friends, I didn’t have to ask for presents. Instead, I could raise money for something I cared about. My first year, I gave my birthday money to my school, but that summer I went to Lassen and I loved the fresh water and the blue skies. I hiked to Bumpass Hell, a waterfall, and a lake with tadpoles. I loved Lassen. On my way home, I decided that I would donate to Lassen on my next birthday.

Q: When your birthday comes around, what do you tell people?

Owen: On my card, I usually say something like, “Instead of presents, please bring a small donation to Yosemite.”

Zach: I say the same thing. Sometimes I invite more friends so I can raise more money for Lassen.

Q: Do you ever miss getting gifts for your birthday?

Zach: Well, my family still gives me presents, so I do get some things. Sometimes I think it would be nice to get toys from my friends. But mostly, I feel satisfied and good to give money to Lassen. My birthday is coming up next month. If my parents told me I could get presents from my friends this year, I would still choose to raise money for Lassen.

Q: Tell us what the Lassen Park Foundation did, Zach, as a result of your decision to give your birthday bounty away.

Zach: Lassen Park Foundation made me a board member, even though I am only seven. I also got a Lassen sweatshirt that I wear a lot.

Q: Owen, what has the Yosemite Conservancy done to recognize your donations?

Owen: One year, they put me in the magazine. I’m also listed in the book of donors in the museum at Yosemite. Plus, I got to meet Ranger Erik Westerlund and he took me on a special hike that not many people know about. It is one of my favorites, and I hike it almost every time we visit. I’m not going to tell you where it is because I like keeping it a secret. Also, the conservancy sends me a card every year and a small Yosemite gift.

Q: Do you think other young people do what you two do—giving up birthday presents so that the parks will benefit?

Zach: I’m sure there are other kids who do what I do. I think that because when we give our money away, it inspires other people and maybe they will get the idea to give to their favorite park.

Owen: I know that some of our friends see what we do and they give to other charities—maybe not a national park, but something that they care about. I feel like I’ve accomplished something when I see my friends doing what I do.

Q: Many adults, including elected officials, do not recognize the importance of caring for natural areas like parks. What would you say to people who do not understand the significance of what you are doing?

Owen: Well, there are so many humans on the planet. We are thriving and taking up so much space, but we don’t live in harmony with our habitat. National parks are important because they are places that humans haven’t touched. They remind me that we should stop polluting and start living with our habitat rather than resisting our habitat. Also, when I am in the parks I feel happy and free and that nothing can stop me from being happy. It’s really important to me to have these places where I feel so—just so happy and peaceful. When we drive into Yosemite and I see El Capitan, I feel like there is nothing in the world that is bad.

If Owen and Zach have inspired you to think differently about gift-giving, consider marking an occasion with a donation to your favorite national park or a tribute gift to NPCA—it’s a great way to protect our parks for future generations while honoring someone special.