Are you Talking to Me?

By Julia Busiek
Summer 2022: Are you Talking to Me?

Researchers in Yellowstone recorded a vocal  interaction between a wolf and a pair of great horned owls. Are the animals actually communicating?

Bárbara Martí-Domken had been slumped in front of her computer all afternoon, squinting at her screen with a big set of headphones clamped over her ears, when she heard something on the recording that made her sit up straight.

Martí-Domken, a wildlife biologist, was processing audio data from recorders she’d installed in Yellowstone National Park. She had two or three terabytes of data to sift through, amounting to thousands of hours of howls, barks, growls and grunts issued by members of the park’s Junction Butte wolf pack during the summer of 2019. So she’d gotten pretty familiar with the sounds of the wolves going about their daily business, rearing their pups and keeping in contact with each other across their sprawling territory.

But over the course of a few minutes one night in late August, the recorders picked up something Martí-Domken, who’s studied wolves in various countries for eight years, had never heard before: a conversation, or so it seemed, between a wolf and a pair of great horned owls. The clip starts with the deep, fluty sound of the owls calling back and forth to each other. Then the clear tone of a wolf’s howl pierces through the midnight forest. The wolf sounds almost hesitant at first, pausing for 30 seconds after its initial contribution. But then it seems to locate its confidence, and for the next three minutes, the recordings capture an avant-garde symphony of overlapping hoots and howls.

Martí-Domken said she wasn’t particularly surprised to detect owls on the recordings — Yellowstone’s wolves share their home range with dozens of other vocal species, great horned owls included. What made these four minutes stand out from the thousands of hours of forest sounds that Martí-Domken has studied in her career was that the owls and the wolf seemed to modify their vocalizations in response to one another: The wolf’s howls matched the pitch and timing of the owls’ hoots, while the owls — which have less elastic vocal ranges than wolves — started hooting louder and faster. “On the spectrogram of the recording, you could really see something change during those four minutes,” Martí-Domken said. “It seemed like the wolf and the owls were synchronizing.” 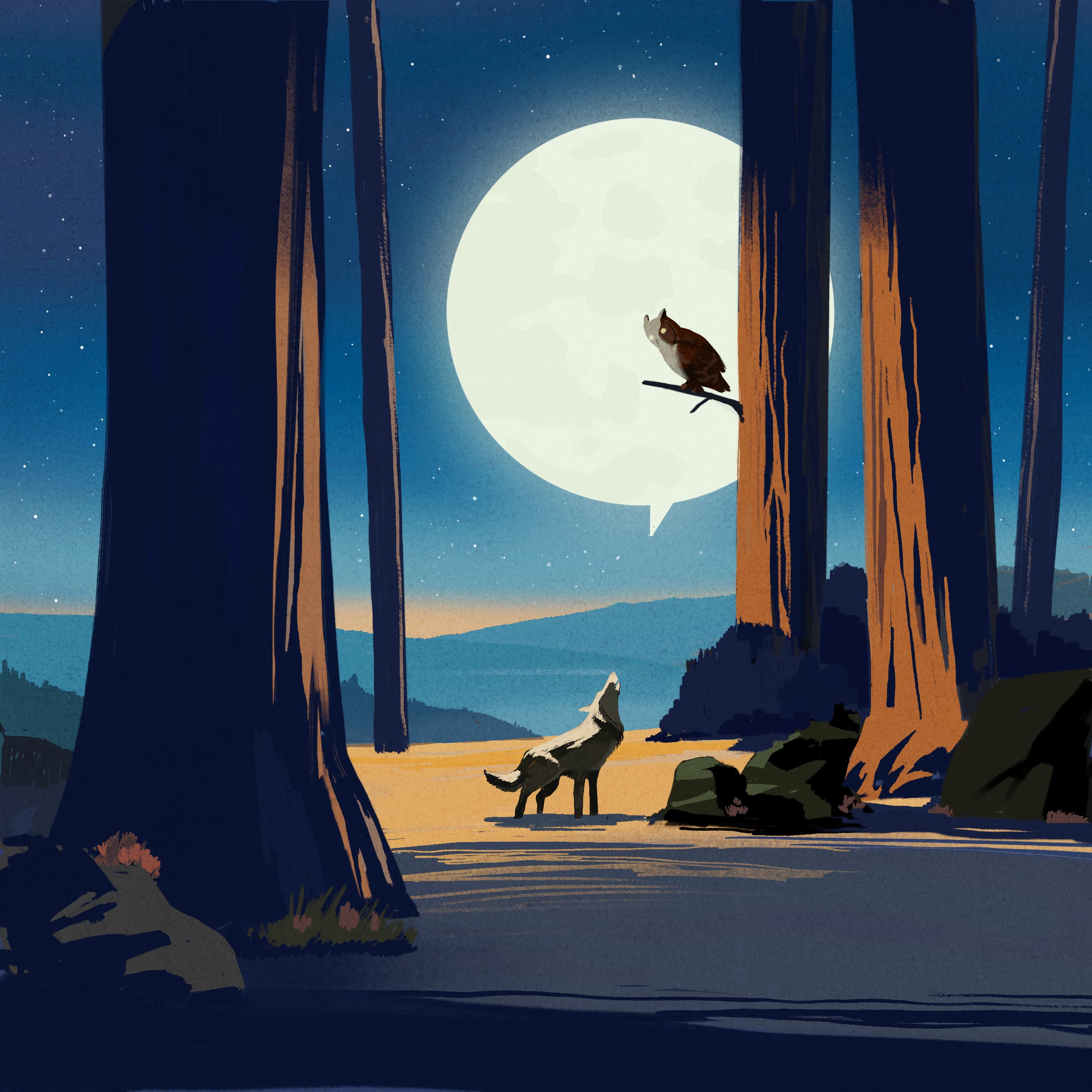 Martí-Domken, who’s currently earning her doctorate from the University of Oviedo in Spain, didn’t set out to study interspecies communication. When she discovered the supposed three-way chat, she was the research technician on a project that used audio recorders to study how wolves adjust their howling habits when they know humans are nearby. (“A lot of human presence means more danger of being killed,” she said. “So our hypothesis was that the presence of humans would decrease howling rate.”) While she and her collaborators worked up the data from the broader study, they published a brief article about the possible interspecies communication in the journal Western North American Naturalist. They believe it’s the first acoustic interaction between wolves and great horned owls ever reported in scientific literature.

In fact, it’s rare for scientists to document any kind of exchange that can be interpreted as a dialogue between species, said Eben Goodale, a wildlife ecologist at Guangxi University in China. Goodale’s bailiwick is mixed-species flocks of birds, so he’s had ample opportunity to ponder the ways and reasons that animals interact across taxonomic divides. “Most species are always listening and trying to get hints about predation, risks and resources from other animals,” he said. In Panama, for instance, scientists determined that frog-eating bat species locate their prey by following the frogs’ mating calls, a behavior biologists call eavesdropping.

Curious to hear all the hoots and howls of this rare vocal interaction? You can find all 4 minutes of it online via The Cornell Lab of Ornithology.

“The majority of interspecies information use is eavesdropping, but it’s not really communication,” Goodale said, because the information only flows one way, and at any rate, the caller isn’t even intending to reach the species that eventually picks up the proverbial phone. “There are just a few instances we know of where animals that interact a lot will directly address the other species.” He mentioned the Guiana dolphins off the coast of Costa Rica that change their whistle patterns when they’re swimming with bottlenose dolphins. In Kenya, where mongooses and hornbills forage cooperatively, hornbills make alarm calls when they spot raptors that prey on mongooses, but not on the hornbills themselves. And groupers in the Red Sea make what Goodale and his colleagues described in a book as “a vigorous body-shaking motion that entices giant moray eels to join them for coordinated hunts in the reefs.”

Scientists are increasingly recognizing the extent to which interspecies communication isn’t confined to the animal kingdom. Researchers have documented a phenomenon known as quorum sensing, where different species of bacteria emit chemical signals that seem to influence one another’s growth and movement. And in her book “Finding the Mother Tree,” forest ecologist Suzanne Simard describes her discoveries of trees exchanging not only water and nutrients, but also hormones and chemical signals, through intricate fungal networks called mycorrhizae. One of Simard’s studies documented Douglas fir seedlings beset by insects appearing to send a chemical alarm through the subterranean mycorrhizal network to nearby ponderosa pine seedlings. In response, the pines upped their production of an enzyme that helps defend them against the insects.

It seemed like the wolf and the owls were synchronizing.

At one point, I asked Martí-Domken what I figured was as straightforward a question as an expert in wolf acoustics ever gets from a curious civilian: Why do wolves howl? They might be trying to alert the pack to a fresh kill, keep tabs on pups or strengthen social cohesion, she said. “But nobody speaks wolf,” she continued. “So all that’s just speculation.” Even if researchers can reasonably infer that two species are, in fact, communicating, most scientists are reluctant to impose human perspectives on animal (or vegetable, or microbial) behavior or motives.

Still, in the article documenting the interaction in Yellowstone, Martí-Domken and her colleagues did hazard some informed guesses about what was happening during that four-minute stretch of their recording. The owls could have been “engaged in territorial advertising and might have directed their calls as a warning to the wolf to leave the area,” they wrote. And based on its pitch, and the fact that there didn’t seem to be any other “reason” for it to be howling at the time, Martí-Domken said the wolf on the recording is most likely a juvenile, just learning its place in the community. “It’s a little bit of naive behavior, or play behavior,” she told me. “He might have just been trying to annoy the owl.”

This might be the first time wolves and owls have been caught on tape seemingly talking to each other, but neither Martí-Domken nor Goodale think it’ll be the last. In the past decade, passive acoustic recorders have gotten much cheaper, more portable and more reliable. And advances in machine learning and data analysis have made it possible to process thousands of hours of audio in minutes. “There are just a ton of recorders out there now, collecting huge amounts of data,” Goodale said. Whatever the reason for the recorders, they’re sure to open new windows into how natural communities function and adapt to change. “This technology is allowing us to see all kinds of things we haven’t been able to see before.”