A prominent climate scientist offers the gift of science-backed hope.

To say that Patrick Gonzalez knows a lot about climate change is quite the understatement. A forest ecologist and an associate adjunct professor at University of California, Berkeley, he is the assistant director for climate and biodiversity in the White House Office of Science and Technology Policy and has served as lead author on four reports of the U.N. Intergovernmental Panel on Climate Change, the science body awarded a share of the 2007 Nobel Peace Prize. He has also witnessed climate change firsthand through field work in 25 countries, including Senegal, Burkina Faso, Peru and Brazil. 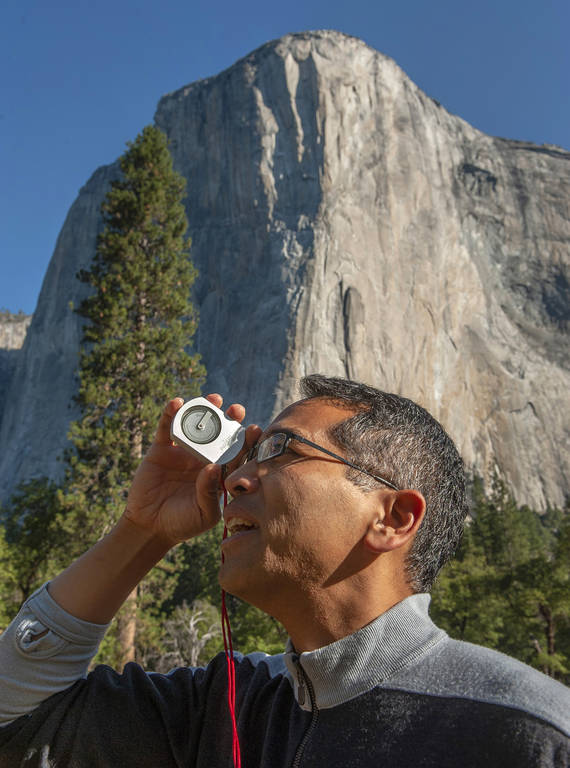 Patrick Gonzalez measures the height of a ponderosa pine in Yosemite National Park.

Gonzalez also knows perhaps more than anyone about the devastation climate change has inflicted on parks: He spent over a decade as a climate change scientist for the National Park Service, where he led a gargantuan effort to assess the effects of climate change and helped develop mitigation and adaptation measures in every park. With experience in 269 U.S. national parks and a computerlike mind for crunching data, he is a walking encyclopedia of climate statistics. You might expect someone with his front-row seat to the ravages of climate change to be dour, but he is, in fact, hopeful. Why?

“IPCC analyses show that we can limit the temperature increase to 1.5 to 2 degrees Celsius above preindustrial levels with concerted global action using existing technologies and practices,” he said. Translation: We as human beings have everything we need to avert the worst of climate change. “Of course, the challenge is substantial,” Gonzalez said. “But the data provide me with optimism — a science-based optimism.”

Writer Kate Siber caught up with Gonzalez this spring after the release of the 2022 IPCC report on climate change impacts, risks and adaptations, which underscored the need for immediate action in starker terms than ever. Here, Gonzalez helps us break down the bad, the good and what we can do, one statistic at a time.

400+
Plant and animal species extirpated from areas of their natural range as a result of human-caused climate change.

To understand where we must go, we must understand where we are. Since preindustrial times, the global temperature has risen at least 1.1 degrees Celsius. If humanity keeps emitting greenhouse gases at similar rates, global temperatures could increase on average 1.5 degrees Celsius above preindustrial levels by about 2032. And according to Gonzalez’s own research, climate change has heated up the landscapes that the parks encompass twice as fast as the rest of the U.S. since 1895 because a large part of the National Park System is located in Alaska, at high elevations or in arid zones in the Southwest. Here are some of the effects and projected impacts of human-caused climate change documented in the IPCC report and key published research, all straight from Gonzalez:

Between 1984 and 2015, the area burned by wildfire in the Western U.S. has doubled compared with what would be expected under natural climate conditions. Under more dire emissions scenarios, climate change could increase fire frequency 300% to 1,000% in Yellowstone National Park by 2100. Across the Sierra Nevada, including Yosemite, Sequoia and Kings Canyon national parks, climate change could triple fire frequency by the end of the century.

The number of plant and animal species that have been extirpated from areas of their natural range worldwide as a result of human-caused climate change, based on a survey of 976 species. In Mojave Desert national parks, including Death Valley, the number of bird species has plummeted more than 40% since 1908.

The proportion of trees across three regions in Africa and North America that have died since 1945 because of severe drought related to climate change. In Western North America, including in national parks such as Mount Rainier, severe drought, increased wildfire and bark beetle infestations have doubled tree mortality from 1955 to 2007.

The maximum distance that biomes — major vegetation zones — have shifted toward the poles or the equator because of changes in temperature or aridity or both. In key areas studied, species have also moved upslope in tropical, temperate and boreal ecosystems by about 300 meters. About one-fifth of U.S national park land is at high risk of biome shifts. In Noatak National Preserve in Alaska, boreal forests are moving onto formerly treeless tundra. In Yosemite, subalpine forests are moving upslope into meadows. These changes can lead to extinctions when species can’t adapt fast enough or, in the case of high-elevation areas, when there is nowhere else to move to.

The world is making some progress in the battle against climate change, and it’s still possible to avoid the most devastating outcomes. “If all countries enacted and implemented their Paris Agreement pledges, the analyses indicate the world could limit heating to 1.9 degrees above preindustrial levels,” said Gonzalez. (Under the agreement, nations agreed to take measures to limit warming to well below 2 degrees and ideally below 1.5 degrees, the threshold beyond which scientists say more severe effects will proliferate.) There are measures to celebrate: Between 2009 and 2018, the world doubled renewable energy capacity globally, adding solar, wind and other renewable energy equivalent to 3,200 coal plants. The U.S. actually cut carbon emissions between 2005 and 2019.

Meanwhile, since the Park Service enacted the Green Parks Plan in 2012, national parks have taken a leadership role in minimizing carbon emissions. Gonzalez points to several encouraging developments that reflect progress across the whole park system: Golden Gate National Recreation Area, for example, used enough renewable energy and undertook enough energy efficiency measures that the park reduced its emissions by 30%. With the help of carbon offsets, it became climate neutral in 2018. Along with other measures, Yosemite installed enough solar panels, including a solar array on the maintenance building at El Portal, to reduce its emissions per visitor by 10% from 2008 to 2011.

Parks have also done significant work to adapt to climate change. In Joshua Tree National Park, for instance, researchers identified areas that may be more resilient to climate change because of factors such as lower temperatures or higher precipitation. Staff members are now prioritizing wildfire management in these climate refugia to safeguard the species within park borders.

17%
Percent by which emissions could fall if all of humanity switched to a plant-based diet, according to global data.

To limit warming to below 2 degrees Celsius, Gonzalez said, we need two important global transformations: cutting greenhouse emissions to net zero by 2050, which will require the near elimination of burning coal, oil, gas and fossil fuels, and stopping deforestation. “Halting tropical deforestation could cut carbon emissions 15% and protect globally unique biodiversity, including in national parks in tropical areas,” he said.

Making changes on a wide scale as well as in our own lives necessitates a shift in mindset, but it can be done, Gonzalez said. Each person in the U.S. is responsible for emitting an average of 4.2 tons of carbon annually, which is over three times the planet-wide average of 1.2 tons. By comparison, the average person in France is responsible for 1.3 tons of carbon annually. “So, it’s entirely possible to reduce our carbon pollution,” said Gonzalez.

He himself has embraced and recommends two Earth-saving actions on a personal level: He eats a plant-based diet and does not own a car. You can reduce your transportation carbon emissions up to 99% by leaning into walking, biking and taking public transit, he said. From his home in the Bay Area, Gonzalez sometimes walks 10 miles a day and takes public transportation to Yosemite to bound up trails and gaze at waterfalls. According to global data, emissions could fall by 17% if all of humanity switched to a plant-based diet.

You don’t necessarily have to make big lifestyle changes to begin to make a difference. “What is the effect of each household turning off a 100-watt lightbulb?” asked Gonzalez. “That’s 100 million households approximately, 100 watts per household, that’s about 10 gigawatts. That’s about 10 nuclear power plants. And more to the point, that’s about 27 coal-fired power plants. So, go to your light switch, turn it off. If everybody does that, we just did away with 27 coal-fired plants. That is the power of combining many small actions.”

A Retirement for the Ages