Brent Steury and his collaborators have had a field day at an unlikely biodiversity hotspot: a park along a highway outside the nation’s capital where they have discovered dozens of new species.

One day in May of 2019, a svelte, black beetle, less than a quarter of an inch long, was flying over a clearing that is part of the George Washington Memorial Parkway in Northern Virginia. It is hardly the most scenic spot in the National Park System — a power line towers overheard, and the sprawling CIA headquarters sit across the road — but in spring, the meadow is covered with common milkweed, hemp dogbane and goldenrod.

It is a haven for critters of all kinds, so that’s where Park Service biologist Brent Steury had set up his trap, a tent-like contraption designed to catch flying insects. It worked like a charm, and the beetle, funneled toward a receptacle filled with ethanol, met its demise along with other beetles, flies and bees. Steury collected the mixture at the end of that month. “We call this bug soup,” he said. 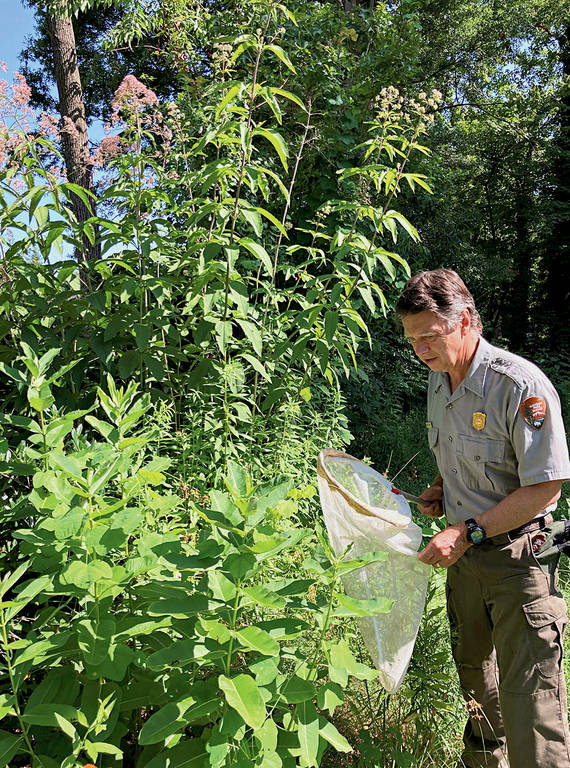 Brent Steury surveying insects at Turkey Run Park. “He’s a naturalist at heart,” one of his colleagues said of Steury. “He’s looked at places where very few others have looked.”

Several months would pass before Jerry Taylor, a volunteer sifting through the bug soup, picked out the beetle and other similar ones for further examination. Steury quickly pegged it as a soldier beetle, but it didn’t seem to belong to any of the 41 other soldier beetle species documented in George Washington Memorial Parkway, a patchwork of Park Service land along the historic highway. “He came in and said, ‘I think we got a new one!’” said Taylor, a retired medical school lecturer with a doctorate in microbiology who calls the volunteer gig “the best job I’ve ever had.”

Steury knew the species was a new one to the park, but to figure out what it was, he would have to go through a long process of reviewing existing literature, comparing his specimen to relevant ones in museum collections and corresponding with soldier beetle experts far and wide. He first determined that the beetle was not a documented native species, but he suspected it might be a nonnative one. Similar species existed in Europe and Asia, so Steury reached out to entomologists there. There was no match in Europe or China, and Steury received the same feedback from Japan. “It’s a weird feeling,” Steury said. “You’re thinking, ‘How can this be? What am I missing?’ And then slowly you convince yourself, this really is a species without a name.”

So Steury gave it one. In a peer-reviewed paper published last September, he formally described Cantharis sheraldi, named after Jim Sherald, a former Park Service colleague. The paper was a highlight in an otherwise bleak year for Taylor. “When I got the publication, I said, ‘This picture is going in my Christmas letter!’” she said.

Discovering a new species might seem like a rare thrill, but it’s anything but at George Washington Memorial Parkway. So far, Steury and his collaborators have discovered dozens of species previously unknown to the world, including 37 springtails (tiny six-legged arthropods), perhaps 30 roundworms, 13 mites, eight moths, eight flies, seven beetles, one sawfly, one small crustacean and one millipede. (Many of these haven’t been formally named yet.) The new species represent only a fraction of the additions to a park species checklist that has grown substantially since Steury started working at the park 17 years ago and now includes nearly 6,500 species, from river otter to jack-o’-lantern mushroom.

“Our ultimate goal here is to document as many species as possible,” Steury said. “This place is just remarkable for the number of species that it holds.”

Potomac Gorge from Great Falls Park. Located at the junction of the Piedmont Plateau and the Atlantic coastal plains, the gorge is home to extraordinary biodiversity.

George Washington Memorial Parkway runs about 25 miles along the Potomac River, from Turkey Run Park in the north to Mount Vernon in the south. The parkway is used by thousands of Washington, D.C.-area commuters every day, but the park itself includes a number of historic and natural sites on either side of the road that welcome upward of 7 million visitors in a typical year. One of the most spectacular features of the park is the Potomac Gorge. Located on a fall line, the gorge formed at the junction of the Piedmont Plateau and the Atlantic coastal plains, and plant species from both regions can be found at some of the park’s units, such as Great Falls Park and Turkey Run Park. In addition, the gorge includes a range of ecosystems, from floodplain forests to bedrock terraces and tidal wetlands, and the river carries seeds down from the Appalachian Mountains. The resulting flora supports a vast array of creatures large and small, making the gorge one of the most biodiverse areas in the National Park System.

For more than a century, scientists have known of the gorge’s extraordinary diversity. In the early 20th century, they would hop on the trolley in Georgetown and get off at a stop along the river to botanize, Steury said. Plummers Island, just across the river from Turkey Run (and part of Chesapeake and Ohio Canal National Historical Park), is home to the Washington Biologists’ Field Club and is known informally as the most studied island in North America.

You’re thinking, ‘How can this be? What am I missing?’ And then slowly you convince yourself, this really is a species without a name.

When Steury arrived at George Washington Memorial Parkway, he continued the area’s long tradition of biological fieldwork. An experienced botanist, he traces his fascination with the natural world to his childhood days. Once on vacation in Tennessee, he and his brothers filled an entire room with butterflies they caught. (The butterflies escaped.) That passion never left him. Now 60 years old, he’s at times giggly when he recounts the excitement of a discovery, somber when he discusses development threats to the park, or reverential when he pulls out trays of impeccably displayed moths from the park’s collections.

“He’s a naturalist at heart,” said Megan Nortrup, an information sharing specialist for the Park Service’s D.C. region. “He’s looked at places where very few others have looked.” 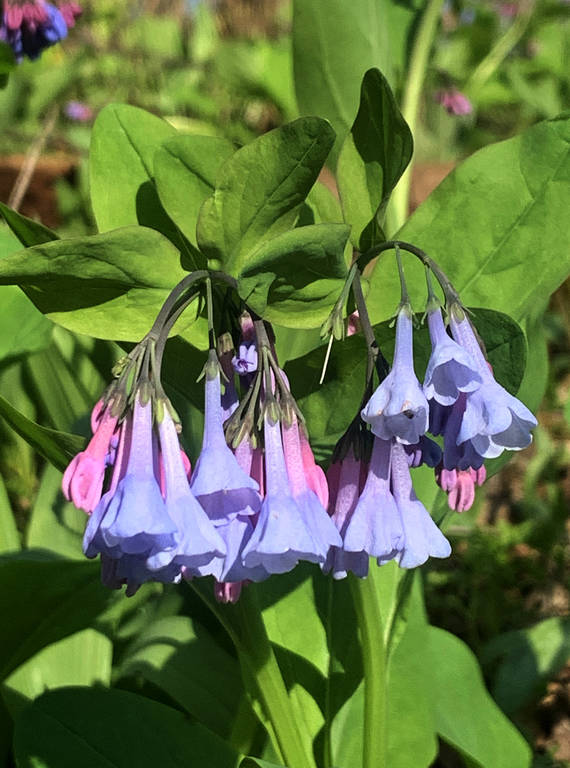 Virginia bluebells in bloom along a park trail in spring.

Relying on his botany background, Steury first conducted a thorough inventory of the park’s flora and documented more than 1,300 species of plants, many of them rare or never found previously in Virginia. He then moved on to snails and beetles but has inventoried species in many groups of animals, from fish to flies and worms. In 2011, the late Oliver Flint Jr., a world expert on caddisflies, suspected a new species might reside in the park, so he asked Steury if he could come out one night and set up some sheets in hopes of catching the caddisflies in question. “The very first night we go out there, we put out the sheet, and there they were,” said Steury, referring to representatives of the caddisfly Flint would later name Neophylax virginica. “And that was our very first new species.”

In many cases, species within a family exhibit the smallest of differences, so relying on the expertise of specialists is crucial. For a recent paper describing four new species of tumbling flower beetles discovered in the park, Steury teamed up with Warren Steiner, an entomologist and research collaborator at the Smithsonian Institution. Still, distinguishing the newcomers from known species was an uphill task. “I’ll go ahead and say it, ‘They all look alike to me,’” Steiner said.

Steury is also grateful for the support of his Park Service colleagues. That’s why he named two of his five recent beetle discoveries after Sherald and Stephen Syphax, another Park Service colleague. (The other three were named respectively after Virginia, the memorial parkway and the Wimbledon tournament because that beetle’s front legs sort of resemble tennis rackets.) Sherald said the honor was “far more than I ever deserved,” and he was able to get a measure of his newfound celebrity when he went to a doctor’s appointment in Alexandria after the local paper ran a story about the soldier beetle discovery. “She said, ‘Are you the one the beetle was named for?’” he said.

Sherald said Steury’s work is all the more important because several of the park’s rare species are at risk. The potential widening of a major nearby freeway could affect the park substantially. (NPCA strongly opposes the project and has called on the Maryland Department of Transportation to drop it in favor of sustainable alternative solutions to the region’s traffic problems.) Separately, a proposed paved bike path across the very meadow where Cantharis sheraldi was discovered could threaten that site. “Many of the things that Brent and others are looking at could disappear, and we wouldn’t know it,” Sherald said.

Steury has his own sense of urgency as he plans to retire in a few years. He has authored or contributed to 60 scientific papers, and three are due for publication just this month. Many of the new species of roundworms haven’t been formally described, and there are entire categories of organisms, such as lichens, that have barely been examined. And there could still be some unknown beetles, moths or caddisflies out there.

“So many insects, and so little time!” he said. “There will be more new species awaiting to be discovered after I’m not able to discover them anymore.”