The Western Glacier stonefly may not be quite as renowned as the polar bear, but it’s just as dependent on ice. The stonefly spends most of its short life scuttling under rocks in its aquatic larval stage before metamorphosing into a winged adult smaller than a paperclip, mating and, within days, dying. Its range encompasses just a few glacier-fed creeks, mostly in Glacier and Grand Teton national parks. Relying on icy runoff is a risky strategy these days: As carbon emissions have cooked the climate, glaciers and snowpack have dwindled, and mountain streams have begun to run dry. But the stonefly isn’t a lost cause. Like many mountain dwellers, it has a secret stronghold, a little-known habitat type that should linger even in the face of rapid warming: the rock glacier. 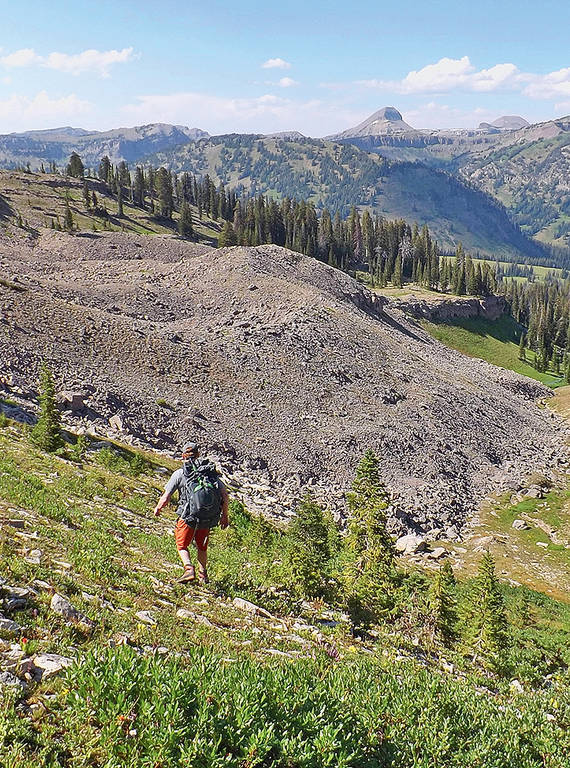 When you imagine a glacier, what pops into your head? Likely a majestic hunk of radiant, bluish ice, squatting in a cirque, plastered to a mountainside or slumping into the ocean. But mountain ranges from the European Alps to California’s Sierra Nevada are also chockablock with rock glaciers — huge volumes of ice hidden beneath blankets of stony debris. Although rock glaciers are inconspicuous, they’re far more numerous than surface glaciers. In the mountains of the Great Basin, the vast swath of high desert that stretches from eastern California to western Wyoming, one study found that rock glaciers contain a whopping 93% of the total ice.

Rock glaciers aren’t merely abundant — they’re resilient. Shielded from the sun’s rays by their blanket of rubble, rock glaciers — along with cold talus slopes, ice-filled moraines and other so-called cold rocky landforms — remain frozen solid even as neighboring surface glaciers diminish to puddles. Now some researchers believe that rock glaciers, and the habitats they create, could help defend western glacier stoneflies and other sensitive alpine species against climate change.

“Five years ago, I would’ve said that these stoneflies are gone in our lifetime,” said Scott Hotaling, an alpine biologist at Washington State University. “I don’t think that anymore.”

Concealed by their bouldered shrouds, rock glaciers historically received little scientific attention. Among the first to appreciate these chilly redoubts was Connie Millar, a scientist emerita with the U.S. Forest Service. Over years of fieldwork in the Sierra Nevada, Millar discovered that the region’s talus slopes and rock glaciers functioned as vast convection systems, circulating and storing pockets of frigid air within their rocky lattices. These cold cavities, Millar realized, provided ideal shelter for pikas, adorable rabbit relatives that easily succumb to heat stress. “It’s like stepping off the tarmac in Phoenix and into an air-conditioned house,” Millar said.

Some of the most unusual cold rocky landforms in the National Park Service’s care occur in Yosemite. Over millennia, chunks of granite sloughed off the park’s famous rock walls, creating vast boulder jumbles pocked with cool, interstitial caves. In 2006, scientists exploring these caves found something odd: a pseudoscorpion, a blind arachnid no larger than a fingernail. (Unlike true scorpions, pseudoscorpions lack tails and stingers, although they do have enlarged, pincer-like claws, known as palps.) The creature, which likely hunts mites, ants and other invertebrates, was eventually declared a new species, the Yosemite Cave Pseudoscorpion (Parobisium yosemite) — proof that cold rocky landforms are cauldrons of evolution as well as climate refugia.

Although pikas are considered one of the species most susceptible to future warming, they’ve proved surprisingly resistant to climate change so far — and Millar thinks they’ll continue to hold out. Based on geological evidence, she estimates that some north-facing rock glaciers may outlive surface glaciers by several centuries, benefiting a vast, cold-adapted alpine menagerie. The frigid air that wafts from their rocky interiors bathes nearby wetlands and meadows. Critters from spiders to wolverines scamper across their boulder-strewn flanks. And the icy seeps that trickle from their cores sustain not only stoneflies but scores of other aquatic insects.

These bastions of biodiversity are particularly abundant in national parks, among them Grand Teton, Glacier, Olympic and North Cascades. John Muir wasn’t thinking about pikas when he advocated for the protection of Yosemite, nor was George Bird Grinnell concerned about stoneflies when he pushed to establish Glacier. But it turns out that the rock and ice that define these protected places make for climate-resistant habitat as well as soul-nourishing scenery. “When we talk about conserving glacier-associated biodiversity, the national parks are almost the whole story,” Hotaling said.

Rock glaciers are among the park system’s most important types of climate refugia — ecological bulwarks whose natural features buffer plants and animals against warming — but refugia come in many forms. In California’s Devils Postpile National Monument, steep valley walls cast sweeping shadows and capture massive pools of cold air. In Virginia’s Shenandoah National Park, streams that are fed primarily by chilly groundwater may help sustain brook trout after other creeks have grown too warm to support these fish.

Identifying refugia can help park staff concentrate on those habitats that are likeliest to endure. In Acadia National Park, biologists expect drought-susceptible trees such as red spruce to persist along cool, damp coastlines, and wildflowers such as three-toothed cinquefoil to hang on atop mountain summits. The park is using refugia maps to guide cinquefoil restoration in subalpine areas and could turn to such maps in the future to direct efforts to control invasive shrubs in sensitive forest patches. “We’re trying to identify spots where spruce will continue, and figure out how to manage in places where it won’t,” said Abe Miller-Rushing, the park’s science coordinator.

In alpine park sites, rock glaciers could likewise become the focus of management efforts, said Toni Lyn Morelli, coordinator of the Refugia Research Coalition. Park staff could limit hiking near icy streams that support imperiled stoneflies or restore wetlands along the fringes of talus slopes. In the future, Morelli said, rock glaciers could even serve as relocation sites for climate-stressed organisms such as mountain sorrel, a plant that thrives in alpine meadows. “People feel pretty overwhelmed by climate change and its dire consequences,” Morelli said. “Refugia conservation gives a little bit of hope.”

Not even rock glaciers, though, can withstand climate change indefinitely. Since 2015, Hotaling and his colleagues have kept close tabs on a dozen alpine sites in and around Grand Teton National Park, tracking both stream conditions and the fate of aquatic insects such as the western glacier stonefly. In 2020, said Lusha Tronstad, an entomologist at the University of Wyoming, one of their instruments began beaming back anomalously warm temperatures from a seep below Paintbrush Rock Glacier. It was a telling indication that the creek had shriveled, exposing the device to the air — and, perhaps, a harbinger of more dramatic losses to come. Rock glaciers will buy the stonefly and its ilk some time, but until we curb climate change, these alpine creatures are on thin ice.