By Dorian Fox
Summer 2021: Getting Some Distance

Is social distancing in busy national parks achievable? During the pandemic, some researchers headed to Arches to find out.

Summer 2021 Getting Some Distance Smaller image 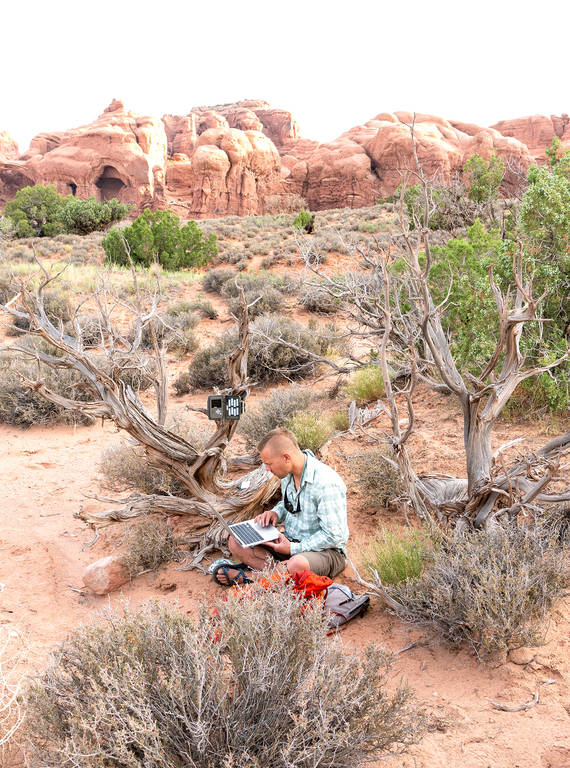 When COVID-19 led to temporary park closures early last year, it seemed like an all-around low-visitation year was inevitable for the National Park System. But that’s not quite how it unfolded. Once sites reopened, many were swarmed again by pandemic-weary, nature-starved visitors seeking relief in the wide-open refuge of the outdoors. In the end, the National Park Service still logged 237 million visitors in 2020, and at least 12 sites saw record-breaking numbers.

The June surge at Arches National Park in Utah, a site that’s long been plagued by overcrowding, caught the attention of Wayne Freimund, a professor of environment and society based nearby at Utah State University’s Moab campus. By then, the Park Service had adopted the Center for Disease Control and Prevention’s social distancing guidelines, but Freimund wondered: Would people really be able to stay apart in the park’s busier areas near the visitor center and on well-loved trails, where footpaths can be narrow and shoulder-to-shoulder run-ins with fellow parkgoers are the norm? “It seemed like an untested hypothesis,” he said.

Anyone who has recently traveled to popular national parks during the high season is surely familiar with the problem of overcrowding. It’s a complicated issue: How do you balance the desire to make national parks available to all people with the need to protect these places and the visitor experience?

During the pandemic, some national parks implemented timed-entry or reservations systems — or both — to limit heavy crowds. Encouraged by the success of these programs, staff at places such as Yosemite and Rocky Mountain plan to employ them again this summer and fall. In the coming months, Glacier will pilot a new timed-entry system; Acadia will continue honing a reservation system years in the making; and Zion will again require reservations for shuttle access to Zion Canyon. NPCA strongly supports these efforts, which reduce traffic in busy scenic spots and on trails and make it easier for parkgoers to access facilities and park their cars. Crowd control also helps protect the parks’ animals, plants and other sensitive resources.

For details about the reservation system in a particular park, go to recreation.gov.

Freimund teamed up with fellow Utah State professor Zach Miller — another visitor use expert who has advised managers in an array of parks — and other colleagues to learn more. Miller explained that despite the large size of many parks, park infrastructure tends to lead to social clustering, rather than distancing. “Most parks are designed to concentrate visitors around sites of interest,” he said. “Yet we also have a health crisis. Are we creating an environment in which we are driving risks?”

With park officials’ blessing, Miller installed a camera in the outdoor foyer of the Arches Visitor Center, with clear tape over the lens to obscure visitors’ features. During two days in July, the motion-activated camera captured one-minute videos, which were later painstakingly analyzed. Using behavioral cues to gauge visitors’ social connections, the team counted numbers of groups and group members; how many groups encountered each other within 6 feet; and how many visitors wore masks. They then spun out the data using statistical models.

The results, published in February, show that 69% of all groups were able to avoid close encounters with other groups. Also, 61% wore masks, even though mask-wearing was not required in the park at the time. The researchers also noted a higher incidence of single visitors than in previous studies, suggesting that during the pandemic, more people were choosing to fly solo or breaking away from their parties, perhaps to ease congestion.

In short, where they had opportunities to reduce health risks, most visitors were doing so. “People were taking it seriously,” Freimund said. “They were managing their own behavior. I was pleasantly surprised.” Since the probability of non-socially distanced encounters rose with increased group size and numbers of groups, the team recommended that park staff encourage visitors to keep groups small and to take turns cycling through high-traffic spots — for example, near information stations and bathrooms.

Trail activity was trickier to study, both because trail width at Arches varies and because the blistering desert heat can cause cameras placed in the open sun to malfunction. But anecdotally, Freimund said visitors were stepping off trails to make way for other hikers, which could reduce health risks, even if it’s harmful to trail-bordering flora and fragile soil crusts. At other parks, Miller and others have suggested making trails one-way loops where possible.

Continued input from researchers such as Freimund and Miller, who are both fellows at Utah State’s Institute of Outdoor Recreation and Tourism and have studied visitor use in parks from Glacier to Acadia, could help park managers better understand and negotiate visitor flow, even after COVID-19 risks abate. Freimund said on-site research restrictions during the pandemic actually spurred creative approaches, such as utilizing geographic data collected via cellphones to study patterns of use in parks and in surrounding communities. “We’re trying to adapt those tools to look at recreation and tourism,” he said. And he still has lots of questions. For example: “What happens to visitation when the park has to shut the gate?” he asked. “Where do people end up going?”

Tune In, Bliss Out