Call in the Wild

By Kevin Grange
Summer 2021: Call in the Wild

Search and rescue, CPR, a hair-raising ambulance ride. All in a day’s work for a paramedic in Yosemite.

The first time I helped bring someone back from a cardiac arrest in a national park was on Saturday, April 4, 2015, at 4:39 p.m.

An hour earlier, Erwin Barret, a 56-year-old cattle farmer from Wisconsin, was having a heavenly day. It was the first time he’d visited Yosemite, and as he drove into the valley with his wife, Rebecca, and their 28-year-old son, Jake, he couldn’t get over the magnificent waterfalls and the granite monoliths of El Capitan and Half Dome rising above the fog-blanketed forests. After lunch, Erwin and his family decided to hike around the rocks of Lower Yosemite Fall, the final 320 feet of one of America’s tallest waterfalls. Hoping for a better view, Erwin scrambled to the top of a large boulder. But as he stood up, something about the dizzying scale of the granite cliffs and the sound of water crashing in all directions threw him off balance. Jake attempted to catch his father, but instead they both fell 10 feet into the shallow water and boulders below.

When the call came in, I was scarfing down a turkey wrap in the emergency medical services office at the Yosemite Medical Clinic. I’d missed lunch when I went out on a search and rescue mission up the Mist Trail earlier that day to help an elderly woman who’d fainted.

“Ambulance 3,” the dispatcher called over the radio, “please respond to the rocks beneath Lower Yosemite Fall for a report of two people who fell off a boulder.”

Standing, I squeezed the last bite of my sandwich into my mouth and hurried to the ambulance. 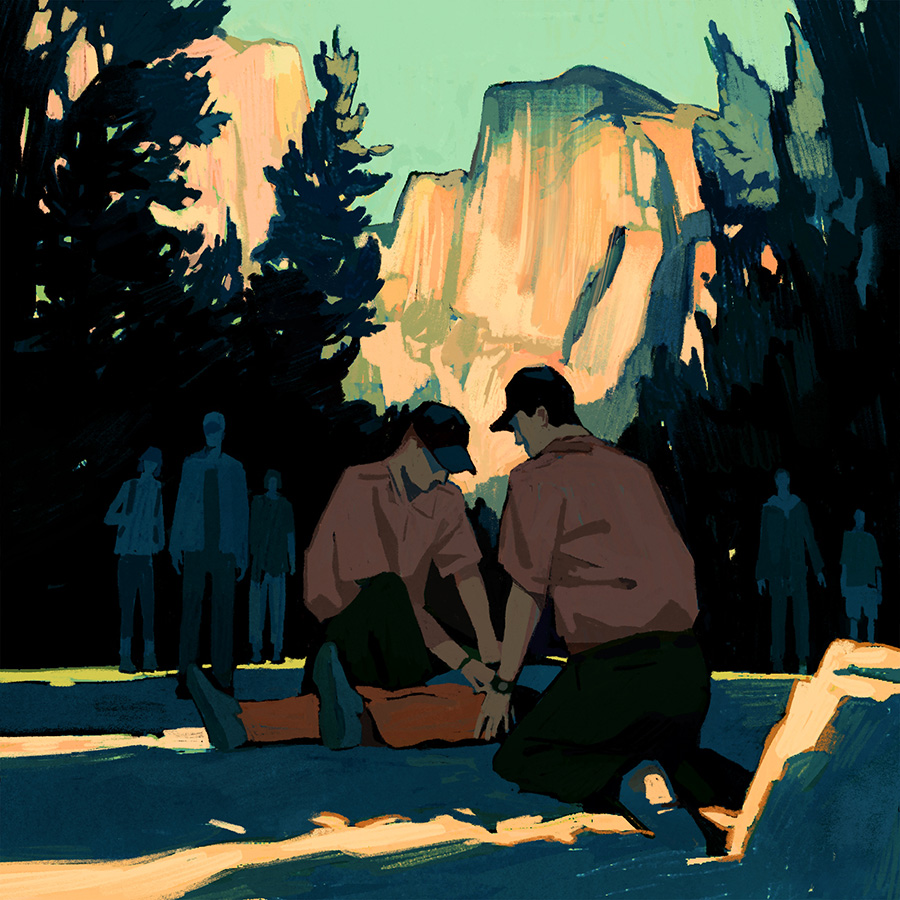 Luke Cohen, a law enforcement ranger, arrived on the scene first. If you were ever ill or injured in a remote place like Yosemite, Mount Rainier or Zion, Luke was the person you wanted responding. He was everything I aspired to be. Along with being a park ranger and paramedic, he was also highly trained in structure fire, wildland fire, search and rescue, and hazardous material emergencies, and he was certified in tactical EMS, high-angle rope and swift-water rescue. Like some kind of special-ops soldier, he was just as comfortable dangling out of a helicopter performing a short-haul rescue on the side of El Capitan as he was plucking a drowning victim from the Merced River’s strong current. Best of all, Luke was a calm and consummate professional, no matter what the emergency. But when he gave his scene size-up over the radio that afternoon, he sounded panicked.

“I have two patients,” he said, struggling to catch his breath, “one green tag, one red.”

Color-coding patients as green, yellow, red or black tags was a way to quickly triage, or sort, patients in a multiple-casualty incident. A “green tag” meant the patient could walk and had minor wounds. A “yellow” patient was more severely injured, and a “red tag” meant the victim had critical, life-threatening injuries. A “black tag” meant call the coroner.

Noah, my partner on the ambulance that afternoon, and I parked at the trailhead, grabbed our spinal immobilization equipment and basic life support bag — complete with oxygen, splinting supplies, bandages and devices known as “airway adjuncts,” which are used to keep patients from choking on their own tongues — and raced up through the boulders and shallow water.

As we approached, I spotted the telltale signs of an emergency — a body lying supine, surrounded by worried bystanders who appeared helpless. Fortunately for the patient though, Luke was also on the scene.

“This is Erwin,” Luke announced as we arrived, gesturing to an overweight man in jeans and a red Wisconsin Badgers football shirt. “About 15 minutes ago, he fell into the water from approximately 10 feet, from that boulder just behind us. Family states he had a loss of consciousness lasting approximately one minute. They, along with a few bystanders, helped drag him from the shallow water, and now he’s alert but says he can’t move or feel his lower extremities. I also noticed he’s growing increasingly lethargic.”

Luke had started an IV in Erwin’s right arm, covered him with a silver emergency blanket to prevent hypothermia and placed a cervical collar around his neck. But Erwin didn’t look good. He was pale and shivering, and his body was wedged between two boulders. His eyes were closed, and he kept whispering, “Please help me.”

“Hang in there, Dad,” said Jake. “We’re doing everything we can.”

Miraculously, Jake had suffered only minor bruises and abrasions during the fall. He stood next to his mother.

As other search and rescue team members arrived, we quickly moved Erwin to a rigid backboard and carried him through the boulder field. We suspected Erwin had a brain bleed and a high thoracic spinal injury, either of which could kill him at any moment.

“Coming through!” I yelled at a throng of tourists snapping pictures on the footbridge. “Emergency!”

By then, we’d placed Erwin onto a gurney and were wheeling him down the paved path toward the ambulance.

“Go with Dad in the ambulance,” Jake instructed his mother. “I’ll drive over and meet you at the landing zone.”

“OK,” she replied, hurrying to the front passenger’s seat.

In the back of the rig, we cranked up the heat and removed Erwin’s wet clothes. Next, we obtained a set of vital signs and performed a detailed physical assessment. Erwin had a 3-inch laceration on the back of his head and an open gash on his right forearm … but we weren’t blinded by bright, bloody things. His altered mental status and lower-limb paralysis were what concerned us the most.

Summer 2021 Call in the Wild illustration 3 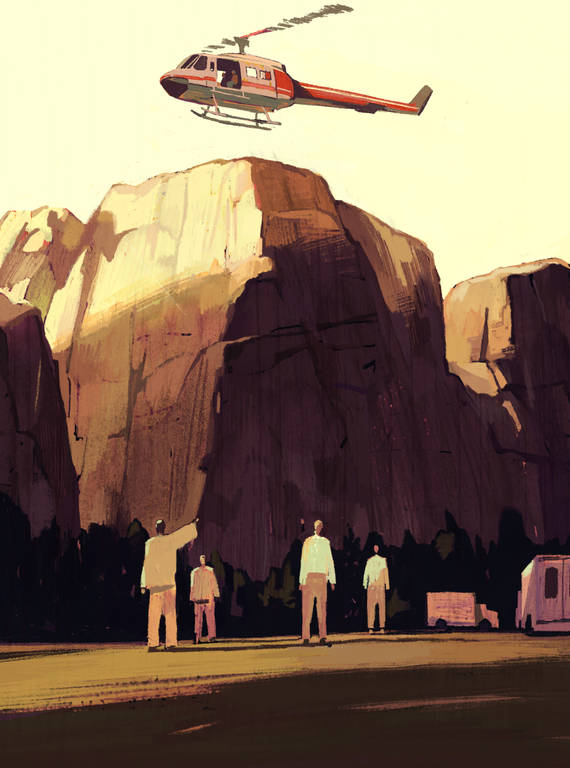 “Stay with us Erwin,” Noah said, pinching his shoulder. “Can you open your eyes for us?”

“Start driving!” I yelled to the ranger at the wheel.

The ranger up front gunned it for Ahwahnee Meadow, five minutes away, where we’d meet a medevac helicopter. Luke had requested one as soon as he’d realized Erwin was critical.

As we started driving, dodging potholes on the bumpy road and launching off frost heaves, I leaned my head toward the front to give Rebecca an update on her husband. “We’re warming him to prevent hypothermia. We’ve started an IV to give him warm saline, checked his vital signs, EKG and blood sugar. We’ve also dressed his wounds, and he’s doing a lot better.”

Of course, no sooner did I say that than Erwin decided to die on us.

The driver slammed on the brakes as I began CPR. Erwin’s belly bounced in a wavelike fashion with each compression, and I heard a few ribs snap like zip ties. This is quite normal when you perform high-quality CPR on older patients, but it is always hard to hear.

While I performed chest compressions, Noah slapped defibrillation pads on Erwin’s chest, and Luke inserted an airway adjunct, then delivered breaths with a bag valve mask.

A moment later, Erwin moved slightly, and we detected a heartbeat.

We started CPR a second time and, within moments, Erwin’s pulse returned again.

The driver hit the gas.

When I started to tire, we switched positions, and Luke began compressing Erwin’s chest while Noah managed the airway. I scanned Erwin’s arm for a second IV site but couldn’t locate one easily. I wasn’t going to spend any time fishing around, so instead I drilled an intraosseous needle into the marrow of Erwin’s shinbone, allowing us to infuse fluids and medication directly into his venous system.

We arrived at Ahwahnee Meadow to find a landing zone set up and secured by a team of firefighters wearing yellow bunker gear. A few minutes later, the air ambulance appeared over Half Dome in the bright sunlight. Seeing the helicopter, ambulance, fire engine and multiple patrol vehicles, the tourists watching assumed absolute hell was breaking loose. But we knew it was just another day in one of America’s national parks where anything could happen — and often did.

“Good luck, Erwin,” I said, as we loaded him onto the bird and transferred care to the flight crew. “They’ll take good care of you.” 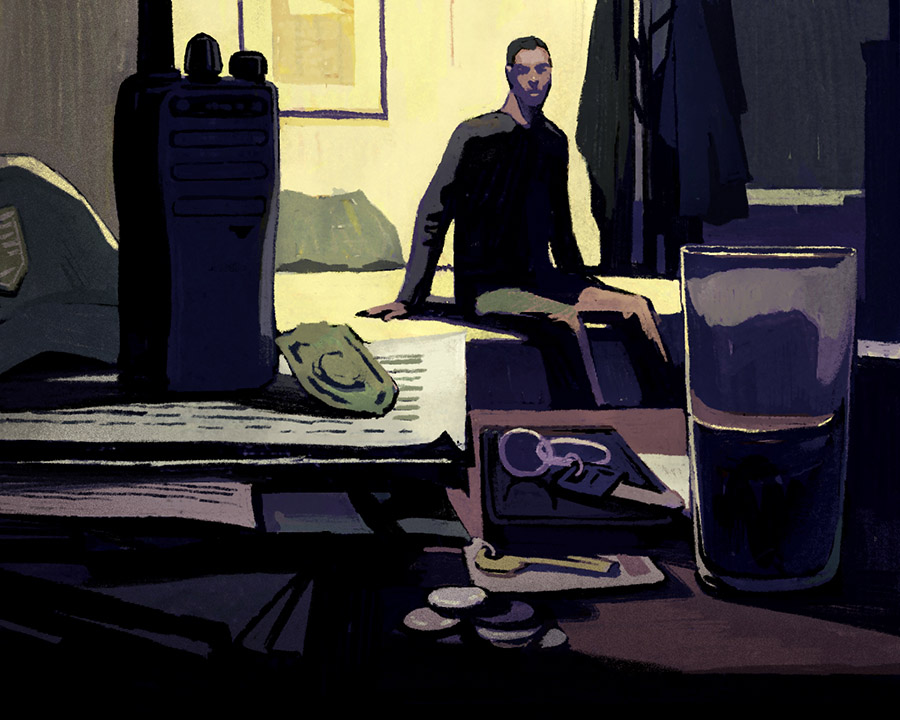 After the helicopter lifted off, bound for a trauma center in Fresno, and the law enforcement units and fire engine cleared, a quiet calm returned to Yosemite Valley. We debriefed after the call — what went well, what we could improve — and then returned to the clinic to replace the equipment on our ambulance. Once everything was restocked, we radioed dispatch that we were back in service.

Hokyoung Kim is an illustrator based in Queens, New York. She is interested in telling stories with images and using light and shadow to create moods.

The call was officially over, but it did not end there. At least not for me.

Like a coach watching a game tape, I spent the rest of the day — and most of the night — reviewing every moment of the incident and asking myself: Did I miss anything? Could I have done anything differently? Or worked faster? Was there anything I should’ve checked but didn’t? Did I provide compassionate care? I knew I’d never run the perfect call, but that didn’t mean I wouldn’t spend my whole career aspiring to.

As the night wore on, my thoughts drifted to my experiences as a paramedic and park ranger. During my time working for the National Park Service, I had attended to an unresponsive scuba diver in Yellowstone’s Firehole River and a heart attack victim in the spurting shadow of Old Faithful. I’d joined multiday search and rescue missions and helped visitors who had overdosed, suffered from strokes and fallen while rock climbing.

Around 1 a.m., my worried thoughts started to abate. The images swirling in my mind grew fuzzy, like out-of-focus photographs, and I began to drift off to sleep. And it was about that time that law enforcement rangers spotted a man down in the meadow across from El Capitan. A dispatch voice sounded in the dark — “All units stand by for a page for Ambulance 3” — and then shrill alarm tones blared from my pager as it vibrated and rattled across my nightstand like a chattering teeth windup toy.

I threw on my uniform and ran to the rig.

This essay was excerpted from Grange’s book, “Wild Rescues: A Paramedic’s Extreme Adventures in Yosemite, Yellowstone and Grand Teton,” published April 6, 2021, by Chicago Review Press. Names and identifying details of the patient and Park Service personnel have been changed to protect their privacy. Learn more and purchase the book.