By Mike Bezemek
Spring 2021: A Chance for Freedom

During the War of 1812, hundreds of enslaved African Americans gained their freedom on Cumberland Island by joining the ranks of the British occupier. For some, liberation was fleeting.

Ned Simmons and dozens of others were asked to line up on shore by their former owner. Until the middle of January of 1815, he’d been an enslaved carpenter at the Dungeness plantation on Cumberland Island, but Simmons and other enslaved laborers had jumped at the opportunity when British soldiers took over the island and offered them freedom.

Now Louisa Greene Shaw, Dungeness’ owner, made a desperate attempt to convince them to change their minds. “She gave them a long talk,” a friend of the Shaw family wrote later. “Told them how kind they had been treated by all the family. All this had no effect.”

Not one of them heeded Shaw’s call. Many reboarded British ships, while others stayed on the island, either resuming their civilian duties to assist the occupiers or performing drills with Britain’s Colonial Marines.

It was on January 10, 1815, that 13 British Navy ships had entered the waters of St. Andrew Sound off the coast of southern Georgia. After landing on the northern end of Cumberland Island, around 1,500 British troops marched south on the main road through salt-pruned oak wilderness. They reached Dungeness the next day, and Rear Adm. George Cockburn later installed his headquarters in the four-story mansion — the only prominent landmark for miles — and gave orders for the construction of fortifications and a wharf.

For the enslaved laborers and slaveholders on Cumberland, it may have been a surprise to see that over half of the British invasion force was Black. Some of these soldiers were freed African Americans who had joined Cockburn’s Colonial Marines the previous year in the Chesapeake Bay. Others were formerly enslaved Caribbean members of the West Indian Regiments, originally purchased by the British but eventually freed after their military service.

Many of these Black troops had already fought winning engagements against American forces, including the British attack on Washington, D.C., and the burning of the U.S. Capitol in August 1814. Three weeks later, others were repelled in Baltimore, where a hastily assembled militia of white Americans, free African Americans and enslaved Blacks defended the city.

The U.S. had declared war in June 1812, partially in response to the forced recruitment of American merchant sailors into the British Navy, which desperately sought manpower to enforce a blockade against Napoleonic France. After American forces prevailed at the Battle of Baltimore, the British shifted their strategy to inciting fears of a slave insurrection in the southeastern coastal states. (Britain had outlawed the slave trade in 1807, but it would wait until the 1830s to abolish slavery.)

Spring 2021 - A Chance for Freedom soldier 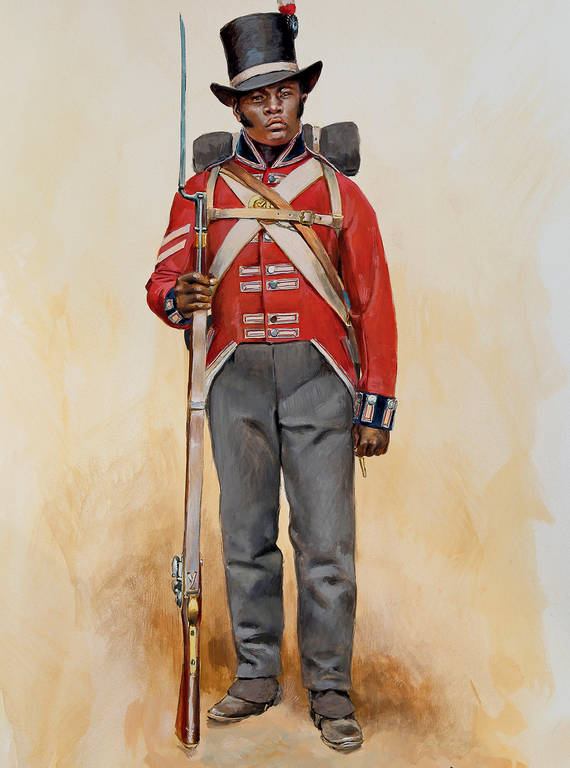 In Fernandina, just south of Cumberland, British soldiers pinned to trees a proclamation by Vice Adm. Alexander Cochrane, Cockburn’s superior: All enslaved people and their families disposed to emigrate from the United States were welcome aboard British ships where they could choose between enlisting or being sent as free settlers to a British colony. The news spread from one plantation to the next.

“Each plantation [on Cumberland] had British officers posted at them,” said Pauline Wentworth, who has worked as a ranger for 22 years at Cumberland Island National Seashore, which encompasses the majority of the island. “This gave an opportunity for enslaved people to take advantage of Cochrane’s proclamation.”

Among the first to enlist was Simmons. Born into slavery around 1763, probably in South Carolina’s low country, he was acquired early in life by Nathanael Greene, the future Revolutionary War general and father of Louisa Greene Shaw. It’s quite possible that Simmons fought the British alongside Greene in the Continental Army. In 1791, Simmons helped escort President George Washington through cheering crowds in Savannah during his celebratory tour of the Southern states.

To encourage participation in the War of Independence, some white slaveholders had promised emancipation for military service. During those early years of the new republic, many enslaved African Americans believed freedom was on the horizon, but while the Northern states abolished slavery by the beginning of the 19th century, the Southern states did not.

“Slaves and free Blacks served as soldiers during a crisis,” said historian Gene Allen Smith, author of “The Slaves’ Gamble: Choosing Sides in the War of 1812.” “But once the trouble passed, both groups were relegated to their former subservient positions.”

When a new promise of freedom came during the winter of 1815, enslaved people from across the region fled to British patrols. Others rowed boats or paddled canoes to Cumberland. One of the most daring escapes happened on the night of February 23, 1815, when 66 enslaved Black men, women and children used a boat to slip away from a plantation on the St. Johns River in northern Florida. With the help of oars or poles, they followed the tides and moved through inland channels winding between cordgrass. They likely reached Cumberland the next morning and discovered a fortified Dungeness plantation with the Union Jack flag flying overhead. The Florida refugees, like most escapees, opted for relocation to a British colony, and they boarded ships to await evacuation.

“There was a chance for a new life,” said Pamela Stafford, the director of Staffords on Cumberland Island, an organization focused on reuniting descendants of enslaved laborers on Cumberland and reacquainting them with the history of their ancestors. “It was a risk to them, but they took their chances with the British.”

The risk didn’t pay off for everyone. After three years of bloody battles, burned cities and atrocities committed by both sides, the war ended in a draw. The Treaty of Ghent, signed by both parties in December 1814 and ratified by U.S. President James Madison on February 17, 1815, stated that all taken territories and property — including slaves — must be restored immediately.

On March 6, 1815, two American representatives arrived on Cumberland Island with a recent issue of the National Intelligencer, a Washington, D.C., newspaper that included a copy of the treaty. When the American emissaries demanded that formerly enslaved people aboard British ships be returned, Cockburn declared an American newspaper article carried no authority over the British Navy. Attempting to stall, he demanded the representatives return to the mainland and prepare a certified transcript of the treaty. By the time the American emissaries returned to Cumberland, all but a few ships were gone. The rest of the British fleet had sailed under the cover of fog, carrying away dozens of freed African Americans.

The American representatives were not pleased with Cockburn’s creatively narrow reading of the treaty: Only enslaved people who were on Cumberland as of the treaty’s ratification date had to be returned. Those who had already boarded ships or departed would remain free, including about 1,500 from Cumberland and at least 2,500 from other areas. Many had already reached Bermuda and would soon be on their way to other colonies, including Trinidad and Halifax in Nova Scotia, where some would die of starvation during a particularly severe winter.

Cockburn’s interpretation, however, meant that around 80 enslaved people from Cumberland who had remained on the island as workers or soldiers were returned to Shaw and other owners. Simmons, who had known only two months of freedom after 52 years of slavery, was one of the unlucky few. As British soldiers took away his musket and uniform, Simmons resisted, according to family oral history that appeared in Smith’s book. Afterward, all that Simmons clutched was a single metal button.

Ultimately, the escape of so many slaves to the British during the War of 1812 increased suspicion and resentment among Southern slaveholders toward enslaved and free African Americans. “In the aftermath of the war, slavery became more entrenched,” Smith said. “State legislatures prohibited individual slave owners from providing freedom to their slaves.”

For the people who were returned to slavery on Cumberland and their descendants, freedom wouldn’t come for half a century. When the Civil War broke out, Simmons was almost 100 years old and still living on the island. Word of the Emancipation Proclamation arrived there in February 1863, and Simmons, along with 60-year-old Lucinda Dorrell, who may have been Simmons’ daughter, and her 73-year-old husband, Jack, crossed the St. Mary’s River to Union-occupied Fernandina. Simmons was housed by missionaries who helped him learn to read, according to a Union reporter who met with him. Simmons would die just a few months later.

The Dungeness house burned right after the Civil War. The Carnegie family bought the estate in 1881 and built an even more imposing mansion on the site, but it too was destroyed in a fire in 1959.

Then in 1969, more than a century after Simmons’ death, two archaeologists excavated a slave cabin, which historian Mary Bullard theorized may have been occupied by Simmons. Among the artifacts they found was a metal button from an 1808 British redcoat uniform.