The documentary “This Land,” an exploration of public lands, conservation and racial justice, follows filmmaker and advocate Faith E. Briggs as she runs 150 miles through three national monuments.

Faith E. Briggs had been living in Portland, Oregon, for a year when the Trump administration announced that it was weighing whether to slash the size of some federally protected national monuments. The news made waves in her newfound community of environment-minded friends, and Briggs, a filmmaker and advocate, found herself trying to learn as much as she could about the controversy and wondering what she could do.

At the time, she was also thinking a lot about her identity as a conservationist. “I’d always seen a disconnect between the experiences of people of color and the conversations being had in environmental spaces,” said Briggs, who is Black. “I was trying to navigate my own understanding of what my life looked like as a conservationist and trying to redefine that word for myself. To own it.”

“The joy and freedom of running is something people can understand,” said Briggs, pictured in Organ Mountains-Desert Peaks National Monument in New Mexico, “whether you’ve done it on a playground or whether you’ve raced your sister up the street.”

Briggs started talking to her friend, Addie Thompson, about an idea for a short film. The two are both serious runners — Thompson is an ultramarathoner and Briggs, a high school and college sprinter, had recently fallen in love with trail running — and before long, a daring scheme to run through several national monuments began to take shape. (They quickly realized that going to all 27 monuments the Trump administration was threatening with rollbacks, as they first imagined, was wildly impractical.) They would talk as they always do on runs, connect with the landscape through “human-powered movement,” and show that people of color, who have historically lacked access or felt unwelcome in the outdoors, belong in those places — and that public lands are theirs, too. And of course, the film would publicize the threats national monuments face, and maybe help protect them in the process.

“This Land,” which was released online in March, somehow manages to do all of that. The documentary follows Briggs — and four others who join her for various legs of the journey — as she runs 150 miles (around 20 a day) through Cascade–Siskiyou National Monument in Oregon, Grand Staircase–Escalante National Monument in Utah and Organ Mountains–Desert Peaks National Monument in New Mexico. Co-directed by Whitney Hassett and Chelsea Jolly and produced by Briggs, the film is both intimate and soaring. It shows Briggs and her fellow travelers philosophizing and laughing and also features breathtaking footage of vast, remote landscapes. Their choice of Grand Staircase-Escalante is especially poignant: Most of the areas of the site captured in the film lost national monument status in late 2017, when the administration drastically cut the size of that site and Bears Ears National Monument in Utah. 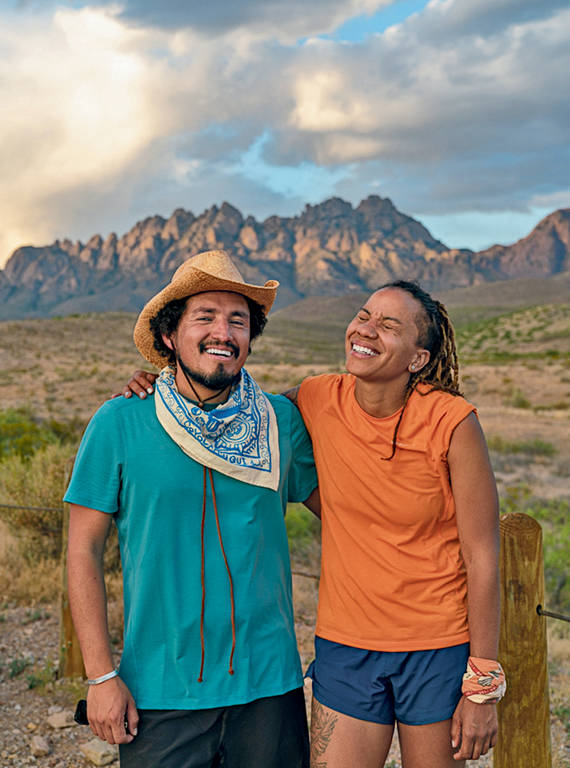 “It’s a really scary time. It feels like everything is precarious and nothing is done,” Briggs said. “Even if you create a national monument with a presidential proclamation, that could just be undone.” (NPCA joined a coalition of conservation groups to fight the monument rollbacks in court, arguing that in fact, protections established under the authority of the Antiquities Act cannot simply be undone. The case is pending, but in the meantime, the new boundaries are in effect, paving the way for oil and gas extraction and other commercial activities in areas of the monuments that the current administration excised — illegally, according to NPCA and its allies.)

As Briggs and Thompson had envisioned, the film also delves into issues of race and access. It broaches Briggs’ family history (her mother, who is white, was temporarily disowned by her family when she decided to marry Briggs’ father, who is Black) and touches on the history of people of color and the outdoors. After the landmark Supreme Court case Brown v. Board of Education desegregated schools and laid the groundwork for broader desegregation, parks that had been set aside for African Americans were dismantled, Briggs said in the film. “We lost a ton of recreational spaces for Black people, but it wasn’t like overnight, they were going to be skipping around in the state park,” she said. “That would have been dangerous. They weren’t actually welcome there.”

Battling that legacy was one of the points of the film, Briggs said in an interview this summer. “What does it mean for me to be running through those monuments,” she asked, “as this Black woman with dreads and tattoos from a city, who doesn’t come from a bunch of money?”

Dustin Martin, who joined Briggs for a day of running and filming in Organ Mountains-Desert Peaks, begins to answer that question in the film and picked up the topic in a recent conversation. “The main thing is seeing people that look and sound like you using those spaces to make you feel included,” said Martin, executive director of Wings of America, a nonprofit that promotes running to Native American youth. Briggs knew “in her heart that was the story she needed to tell.”

Hassett, the co-director, described the 17-day, bare-bones shoot as both the most challenging and most fun of her career. The all-female film crew piled into a big production van, cooked their own food and often slept next to the van tires before waking early to start shooting. Managing the logistics was a formidable task, and unexpected twists and turns made it that much more complicated: Trails and public roads wouldn’t be where they were supposed to be, rivers overflowed, or the weather would suddenly shift and the skies would open. The van once got stuck in mud. The crew rode mountain bikes to catch up to the runners in places, and sometimes they lost them altogether. “At certain points, we were using three different map sources to try to bring in one picture of where we were located and how to navigate,” said Jolly, the other director.

Briggs described one especially harrowing day: “There were three or four river crossings that I couldn’t cross. Three hours later, I was crawling under sagebrush trying to get back to the river and trying not to cry,” she said. “Unlike national parks, monuments aren’t set up with people’s recreation in mind.” (The crew used drones to shoot some of the stunning film footage — and in one case, to find Briggs deep in a wash. Drones are allowed in some monuments in certain circumstances, though rules vary from place to place.)

Yet even with all the behind-the-scenes (and some on-screen) drama, the pure joy of running clearly shines through in the movie. Thompson, who ran with Briggs for two days in Oregon and is the movie’s associate producer, spoke about being overcome with giddiness on her first day of filming. “It all swelled at once, and I felt this burst of energy and appreciation,” she said.

When Briggs and her collaborators were searching for financial support, they discovered that many potential funders were puzzled by the range of material. They didn’t understand how a movie could coherently focus on conservation, running, inclusivity, and the relationship between African Americans and the outdoors. But that was around three years ago, before Ahmaud Marquez Arbery was chased down by white residents and shot dead while jogging in Georgia. And before a woman falsely accused Christian Cooper, who is Black, of threatening her life when he was birdwatching in Central Park in New York City. If they were shopping the movie around today, the filmmakers said, they think it would be a very different story.

“It’s great the film is getting the traction it’s getting. And I also think it’s getting that traction because the conversation has changed. Why is the outdoors not as open or welcoming to BIPOC folks?” said Thompson, using the acronym for “Black, Indigenous and people of color.” “People are asking questions that they haven’t asked themselves before.” (Eventually, the filmmakers secured backing from several funders, including Merrell, an outdoor footwear and apparel company, and Peak Design, which sells bags and camera gear, but even with that support, they had a very tight budget.)

Arbery’s tragic death may have opened some people’s eyes to how revolutionary running can be, Briggs pointed out. “You’re reclaiming a degree of safety and power. Because you said, ‘I can be in this place. I can run through it,’” she said. Moreover, the coronavirus pandemic may help people realize, if they didn’t understand it before, that everyone should have access to green space, she added.

“For people who do environmental work and justice work, there is an understanding that there is always going to be a step forward and two backwards. This is a long road,” she said, “but I’m feeling very hopeful right now.”

For more information and to view the film, go to www.thislanddoc.com.