Jessi Silva gets frustrated filling out her census form. “I’m American,” she says, faced with the questions about race and ethnicity. “Why can’t I just say I’m American?”

Silva’s desire for simplicity comes from a complex reality. Her family is considered Hispanic. Yet on her father’s side, she is descended from a Buffalo Soldier, a member of a post-Civil War regiment of Black soldiers from nearby Fort Davis who served during the expansion of the West. Her great grandfather’s mother was a Seminole from Florida. Another of Silva’s ancestors was Belgian. But when she was a child, she was segregated for her Mexican ancestry when she attended classes in Marfa, Texas, starting in the first grade.

In the 1950s and 60s when Silva was young, children of Mexican descent in Texas were not separated from their white counterparts by state law the way African American students were. Instead, Texas school districts established separate elementary schools through the practice of de facto segregation — separation not sanctioned by law. In Marfa, where the majority of the population was of Mexican descent, that school was the Blackwell School, which operated from 1909 to 1965, and which a Sanborn Fire Map from 1933 clearly labels as a “Mexican School.”

Silva’s family had also lived in California for a few years, and she remembers, “School there was different. It was Chinese, Blacks, Hispanics, Portuguese, everything. And they were just like everybody else. Nobody was better than the other, nobody looked down on the other. California was mixed. And here [in Marfa], it was Hispanics on one side, Anglos on the other, and I couldn’t see why they weren’t in the same school. I became aware of segregation when I came back from California.”

During her first year, school instituted a policy not to speak Spanish on school grounds. Teachers introduced the policy with an assembly around the flagpole where a cigar box was buried in a mock funeral. The funeral was for “Mr. Spanish,” and the box contained slips of paper written by students disavowing the language. Afterward, the policy was enforced regularly with corporal punishment.

Silva remembers many students getting paddled for one infraction or another, including speaking Spanish. She tells of a teacher who would call boys up to the front and have them bend over with their backsides to the class while he paddled them multiple times. Then, he made them stand and face the class with tears in their eyes.

The way teachers treated students at school reflected the discrimination Mexicans experienced in the larger community. One time at the grocery store, Silva remembers a white lady giving her mother a dirty look and taking the cart that she was about to use. As a child, Silva didn’t understand the whole dynamic, but she clearly saw the action as an affront to her mother’s dignity. Silva also endured her high school principal insulting her father and questioning his ability to afford indoor plumbing.

In 2013, the National Park Service published, “American Latinos and the Making of the United States: A Theme Study.” In examining the Latino struggle for education equality, Victoria-Maria MacDonald wrote, “Schools have often been sites of political, racial, and linguistic conflict between the majority population and Latino groups. Latinos today are underrepresented in key indicators in school achievement such as high school and college graduation rates, standardized tests, and college entrance examinations. Most experts agree that these indicators are not a reflection of ability; rather, Latinos have faced social, economic, and political barriers embedded in their historic presence in the United States. Despite these obstacles, Latino communities have always demonstrated the capacity to act independently and to make their own choices in the struggle to gain access to quality schooling.”

The class of Miss Mary Shannon, one of two teachers who taught all grades at the Blackwell School circa 1910.

At the Blackwell School, the Mexican community demonstrated that capacity through committed parental involvement, including an active Parent Teacher Association. The leadership of the Blackwell School also worked hard to provide a quality education. Although students suffered second-class treatment and used secondhand books and furniture from the Anglo school, a core group of dedicated teachers were determined to provide rigorous instruction. Despite not being welcome in many businesses and areas of town, students remember the welcoming grace of long-time first grade teacher Willie Harper, the loving heart of many students’ favorite teacher Mildred Shannon, Evelyn Davis’s rigorous English lessons, and many more dedicated teachers and staff. Many Blackwell alumni are proud of their school and their classmates. They were band members, basketball players, academics – they were as American as any other students. 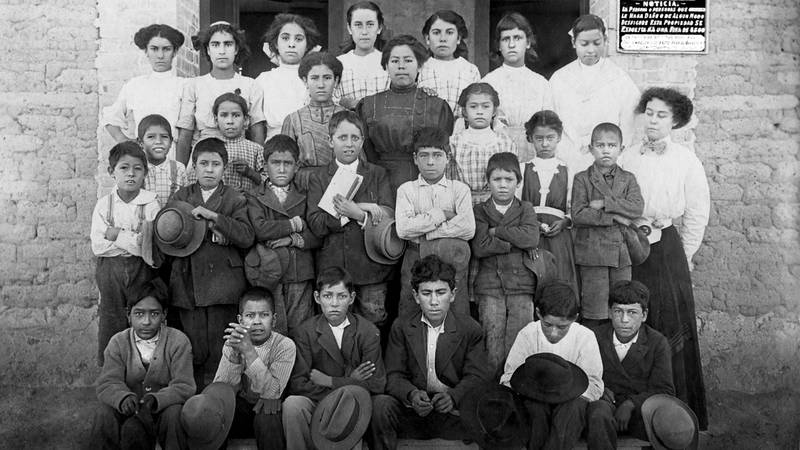 Preserving the Complicated History at a Segregated Texas School

Silva experienced this first-hand when she returned to the school from California in the middle of her 6th grade and fell behind her class. She ended up repeating the 7th grade to catch up. She fondly remembers Mrs. Davis, who taught her English through her two years in 7th grade, and then again in 8th grade. Silva describes Mrs. Davis as tough, caring and often irreverent. Later when Silva took a college admissions test in California, she aced it and credits her lessons from Mrs. Davis. In an odd twist that reflects Blackwell’s complicated legacy, it had been Mrs. Davis’ idea to “bury Mr. Spanish.”

Today, a group of former students and some dedicated newcomers to Marfa are attempting to preserve the original 1909 Blackwell School building, which is on the National Register of Historic Places. Silva has been involved in that effort as a board member of the Blackwell School Alliance, an organization that supports including the school in the National Park System. More than half a century after racial integration in Texas, many formerly segregated schools in the state have been demolished or have fallen into disrepair. NPCA strongly supports a new park site to help tell this story so the country does not lose another priceless piece of history.

Looking back, some of Silva’s memories have softened with perspective; others shine through as painful as ever. The complexity and contradictions of the Blackwell School are what make its preservation so important. When asked about the future for the historic adobe schoolhouse, Silva doesn’t hesitate. “The best thing that Blackwell could be is a museum,” she says. “I think more people need to open their eyes and ears and come over and see what the Blackwell School is about.”