One Step Closer to a Manhattan Project National Historical Park

Advocates have been waiting more than a decade to create a national park that would preserve historic sites and artifacts involved in the development of nuclear energy and the making of the atomic bomb. Now, we could be remarkably close to seeing these once super-secret details and places in American history open and interpreted for the public.

#{image.caption}
The Hanford B Reactor outside Richmond, Washington, is one of three sites that would be preserved in a Manhattan Project National Historical Park. U.S. Army Corps of Engineers photo.

This past June, the House of Representatives passed the National Defense Authorization Act, a bill which included an amendment to create the Manhattan Project National Historical Park. If passed by the Senate, this newest park unit would include areas in Oak Ridge, Tennessee; Los Alamos, New Mexico; and the B Reactor in the Hanford site outside of Richland, Washington.

Together, these sites tell the story of the building of the first atomic bomb and the consequences it had on society. NPCA has worked for several years with Congressman Doc Hastings and members of Congress from Tennessee and New Mexico in efforts to make this park a reality. We believe that this national park will allow visitors to consider the project’s many ethical, cultural, and scientific implications. This is not a park to celebrate the creation of atomic weapons, as some detractors fear, but to put into context the impacts, both positive and negative, that resulted from splitting the atom.

Telling the complex story behind the Manhattan Project would not only facilitate a thoughtful discussion about a difficult period of wartime history, it would also fill a needed gap in telling America’s story.

“With only a very small percentage of our national parks currently dedicated to interpreting science and technology, the Manhattan Project National Historical Park would help enhance our National Park System–particularly as we look to its 2016 centennial celebration,” said NPCA Senior Vice President for Policy Ron Tipton, who has advocated for years to see the park become a reality. “It’s an ideal topic for the National Park Service to interpret.” 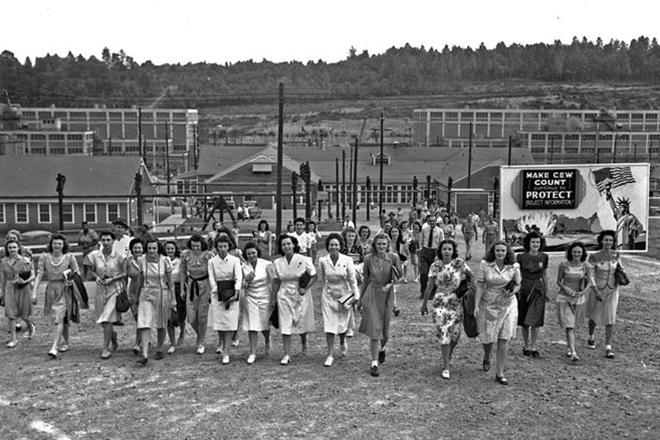 Women change shifts at an enrichment facility at Oak Ridge, Tennessee, circa 1945. This site would be included in a Manhattan Project National Historical Park. U.S. Army photo by Ed Westcott.

Cindy Kelly, president and founder of the Atomic Heritage Foundation, has spearheaded efforts to create the new park and is a leading advocate for telling a balanced story about the origins of nuclear energy. She echoed Ron’s sentiment: “Recognition of the Manhattan Project as an important part of America’s story is long overdue. Looking ahead, the Manhattan Project National Park should be a source of inspiration for many generations of scientists, engineers, and mathematicians to come. The project not only harnessed the energy of the atom, but produced thousands of innovations that led to high-speed computers, the human genome project, outer space exploration, nuclear medicine, and energy. The new park will also help citizens understand and reflect upon the complex role that nuclear weapons have played in history, politics, economics, culture, and society.”

Denise Kiernan, author of The Girls of Atomic City, earned acclaim for researching the stories of ordinary people—mostly young women—who unknowingly helped enrich uranium in Oak Ridge, Tennessee, in the early 1940s. She added, “The proposed park is not simply about preserving scientific and technological history, but also recognizing and better understanding the experiences of thousands of women and men from all racial and socioeconomic backgrounds who lived and worked on the three main Manhattan Project sites. The results of their work—nuclear weapons, nuclear energy, and nuclear medicine—continue to influence our lives today in myriad and complex ways.”

If Congress approves this park, the Park Service can help generations of world citizens understand and learn from the significance of this turning point in world history. NPCA urges our Senate leaders to pass the Manhattan Project National Historical Park Act and the president to sign the legislation.