Members of Expedition Denali carry their gear on their sleds as they climb toward North America's highest peak.

On June 24, Adina Scott made a satellite phone dispatch from 17,200 feet on Mount McKinley in Denali National Park. As part of the climbing team Expedition Denali, she and the 18 others had already spent a total of 16 days on the mountain and nearly a week camped at 14,200 feet. Now, they were making a valiant push toward the top. Speaking under clear skies, she was suddenly within striking distance of the highest peak in North America, a mountain also known as Denali.

“We’re super stoked to have a new view,” Adina said over the line. “It looks like you can touch the summit from here, but that’s just the Alaska scale talking. It’s still pretty far away.”

Despite the distance they had yet to travel, the team was thrilled to have come so far. If successful, they would be the first team of African American climbers to reach the summit of Denali. But there was a greater goal for this group, led by the National Outdoor Leadership School (NOLS). They aimed to change the face of outdoor recreation by demonstrating that despite low rates of participation among minorities in the United States, people of color have a vital role to play in the protection and preservation of wilderness.

Leaving behind the relative comfort of their camp, the team was on track to reach their goal. Well-acclimated and strong, they hauled their heavy packs and sleds across the West Buttress. They climbed over ice and snow fields to ascend a particularly difficult rock section and a dangerously exposed knife-edge ridge. Though exhausted from the long day’s journey, they cheerfully settled into the familiar chores of melting water and cooking food. As they established their camp—more determined now than ever—all that seemed to stand between them and the summit was the weather.

“So far folks are tired but in good spirits and looking forward to hopefully getting a summit bid in in the next day or two,” Adina said. “They’re projecting less wind in the near future. So hopefully we’ll be able to go ahead, get up and do our thing.”

Over the past 100 years, thousands of mountaineers have ventured into the Alaskan range to climb Denali. Named for an Athabaskan word meaning “the High One,” this incredible snowcapped peak measures 20,328 feet and is literally the highest physical point that anyone can reach in the United States. Since Alaska native Walter Harper first successfully summited the mountain on June 7, 1913, Denali has stood as a great symbol of skill and accomplishment among climbers. And as an icon of freedom, the mountain also represents the heights to which all people in America—regardless of their race or ethnicity—can aspire and perhaps attain. 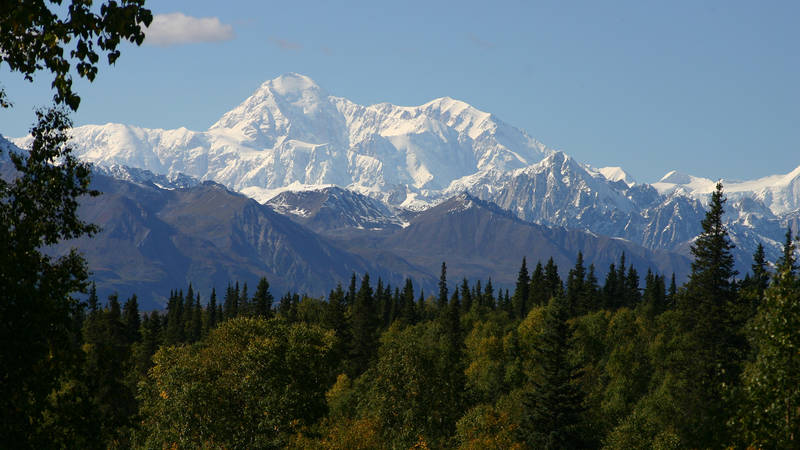 Nestled at the heart of Denali National Park, this lofty peak is a geological testament to the broad notion set forth by the historian and novelist Wallace Stegner. “National Parks are the best idea we ever had,” he wrote. “Absolutely American, absolutely democratic, they reflect us at our best rather than our worst.” It might be said then that to climb Denali, to endure its bitterly cold temperatures and dizzying heights, is to seek out the very best that America has to offer.

Climbing mountains has long been a metaphor to illustrate the pain and struggle to achieve most any difficult-to-reach goal or objective.  In 1964, during the most turbulent moments of the Civil Rights era—America at its worst—a Boeing engineer from Seattle named Charlie Crenchaw became the first African American to reach Denali’s summit. A member of the Seattle Mountaineers expedition, he defied the odds of the time to turn a dream into reality.

Ironically, Crenchaw was profiled in Ebony magazine a year earlier, along with a story in the same issue that featured Dr. Martin Luther King, Jr.’s march on Washington. In his “I Have a Dream” speech, King proclaimed that our freedom as a nation and as individuals must be allowed to ring from the very heights of mountains across America.

“From every mountainside, let freedom ring,” he said on the steps of the Lincoln Memorial before 250,000 spectators.

“Let freedom ring from the snowcapped Rockies of Colorado!

“Let freedom ring from the curvaceous slopes of California!

“But not only that; let freedom ring from Stone Mountain of Georgia!

Though he was speaking figuratively, at the time, those mountains were literally visited by only a select few. Though Crenchaw himself enjoyed the freedom and privilege of leisure time, disposable income, and few obligations, allowing him to climb in the Pacific Northwest, millions of African Americans in the South didn’t even have the right to vote. Discrimination at the time across the country limited black people’s freedom of movement. And racially motivated violence in remote locations far from home was a genuine and serious threat.

The generation of African Americans that followed Crenchaw largely fought not for the glory of reaching a high mountaintop, but for social advancements in an urban economy, things such as higher education, quality housing, access to investment capital for the creation of small businesses, and the right to fair and unbiased representation in the legal system. This generation of young men and women was raised with the social imperative to become doctors, lawyers, and entrepreneurs, not vagabond explorers seeking adventure. It’s no wonder that the dreams of many African Americans in the mid-1960s and early 1970s did not include time in nature.

We must not underestimate the symbolic importance of the Expedition Denali mission. This historic climb stands not as a grand gesture of personal achievement, but rather a sincere expression of welcome. This team of black climbers and their supporters are extending an invitation to all people, particularly minority youth, to experience true freedom, to go out and explore the divide between mediocrity and excellence, the boundary between the many who play it safe and the few who push beyond their limitations to achieve great things in the natural world. It’s the line each of us must cross to fulfill our dreams, no matter how foolish or frivolous—a treacherous expanse called the adventure gap.

The members of the Expedition Denali team aim to reach across this gap to connect with Crenchaw’s legacy and inspire one of their own. Year after year, statistics reveal that relative to their percentage of the U.S. population, African Americans are least likely of all ethnic groups to engage in outdoor recreation, to be members of environmental protection groups, or to pursue careers in wildlife management. Blacks are under-represented among visitors to national parks. Few African Americans become professional athletes in rock climbing, mountain biking, kayaking, or downhill skiing. And in the multi-billion dollar outdoor industry, including makers of adventure clothing and equipment, the number of black senior executives can be counted on the fingers of one hand.

NOLS aims to change that. This institution of high-altitude learning based in Lander, Wyoming, recognizes that its own long-term success depends on serving the needs and interests of the population as a whole, not just the white, socially mobile, well-educated, and affluent individuals that have traditionally made up its staff, faculty, and student body. NOLS and many other environmental organizations like the Sierra Club, the Wilderness Society, and NPCA have consciously worked for years to broaden their constituency by building inclusiveness into their mission.

As the U.S. population shifts to a non-white majority, as predicted to occur in 2042, emerging communities of black and brown people across the nation will ultimately elect politicians, enact legislation, and allocate state and federal funds to protect the environment. Or perhaps they won’t. Unless action is taken today to build substantive relationships with people of color and emphasize the importance of our common love and appreciation for nature, it is very unlikely that future generations will want to protect it.

On June 26, two days after Adina Scott’s phone call, the Expedition Denali team made a bid for the summit.

“We woke up to some gorgeous weather and we were looking pretty lucky,” said team member Erica Wynn.  “As we were heading up Denali Pass, everything was going smoothly. But as we started moving forward, the weather started acting up. We had a lot of wind and snow.”

The team soldiered on. As luck would have it, the weather gradually began to clear as they moved further and further up the mountain.

“We made it to the Football Field which is right before Pig Hill, which would have lead up directly to the summit,” Erica said. “It was looking really nice. Then all of sudden clouds rolled in and we had thunder and lightning strikes.”

The Expedition Denali team, along with more than 40 other climbers, made an immediate retreat.

“I think at this point we were at 19,600 feet. We were really, really close, but we had to turn around,” Erica said. “People on Pig Hill heading for summit started turning around. There were about 60 people on the mountain that day. So we turned around and went as fast as we could back down toward Denali pass.”

With only three days remaining on the permit for their expedition, the team unfortunately had to make their way back to their camp at 14,000 feet.  Other climbers that turned around included leading high-altitude mountaineer Conrad Anker; his son Max Lowe, a National Geographic Young Explorer; and best-selling adventure writer Jon Krakauer, author of the book Into Thin Air. Disappointed but not discouraged, the team members were each very grateful to have made the attempt and to return home safely with an exciting story of adventure to share.

“We didn’t get that picture on the summit. But I like this story better,” said team member Scott Briscoe. “I’m almost glad we didn’t summit.”

The goal of Expedition Denali was never just to reach the top of a high mountain. Upon returning home to their communities across the United States, members of the climbing team will share their experience at elementary schools, churches, professional gatherings, and historically black colleges. Armed with a documentary film and a non-fiction account of the journey published by the Mountaineers Books they’ll demonstrate beyond any doubt that there are literally no heights in American society that African Americans and other ethnic minorities cannot reach. Their stories will illustrate once and for all the fact that people of color have forever played a vital role in the world of adventure. And though there are many who may have never heard of Charlie Crenchaw, Expedition Denali will encourage a new generation of black explorers to cross the adventure gap and fully realize the dream, “From every mountainside, let freedom ring.”